PM SKERRIT TO FORGE AHEAD WITH NATIONAL RESET PLAN FOR DOMINICA 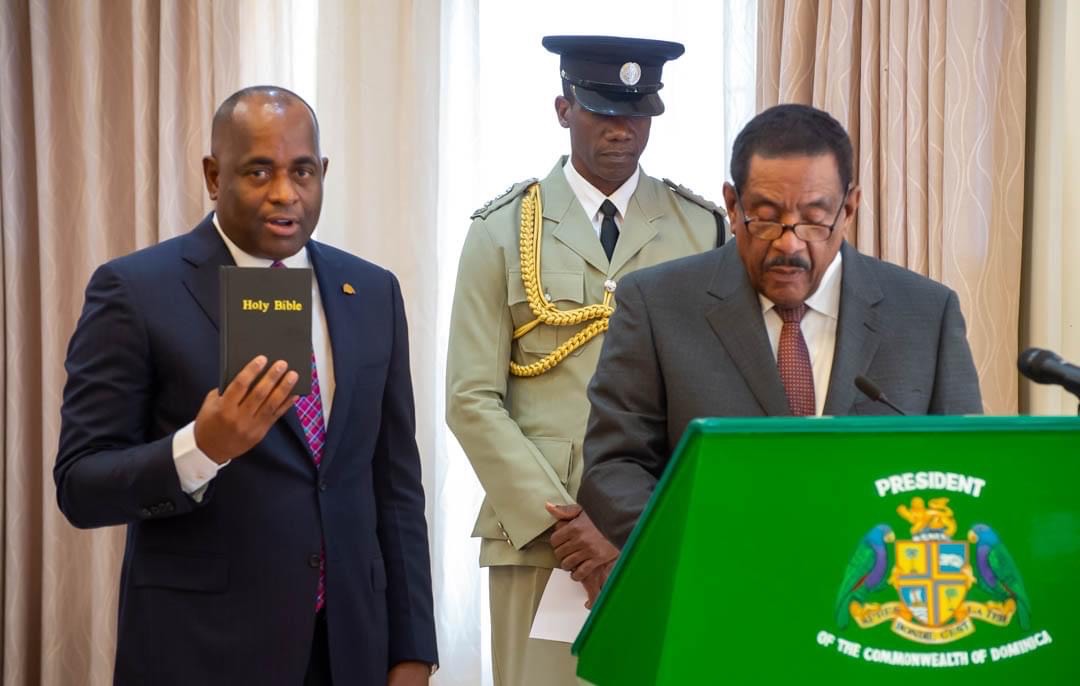 Prime Minister Hon. Roosevelt Skerrit was officially sworn in as the country’s Head of Government during a ceremony on Wednesday December 7 2022 at the State House.

The swearing in of the Hon. Prime Minister came just one day after the Dominica Labour Party secured victory at the December 6th general elections.

Prime Minister Skerrit expressed his gratitude for the support the Dominica Labour Party received during the election period.

He assured citizens that a new mandate will help boost the rebound efforts of Dominica and its economy from the ravages of the covid-19 pandemic, natural disasters and ongoing global acts of terror and economic warfare.

“You continued support has given this government the opportunity to pursue with vigor the national reset I indicated in my address to the nation on November 6 when I announced the calling of general elections in Dominica. I am especially heartened that in the midst of a slew of contributing factors such as the ongoing pandemic, and natural migration of residents as a consequence of the social and economic fallout of various disasters, our party still received approximately 87%  of the votes we secured in the 2019 general elections in the fifteen seats contested, and I am confident if we had contested the six seats, we would have surpassed what we got in 2019,”  Prime Minister Skerrit stated.

Government will forge ahead with more plans to aid in the continued development of Dominica. Prime Minister Skerrit has highlighted some of the priorities for this new term.

“We shall accelerate resolution of challenges besetting residents of the eastern and south eastern communities which were adversely impacted by the recent heavy rains and the disaster that this precipitated and of course we have to relocate and resettle a number of families in this part. We shall forge ahead with the construction of the international airport as well as finalize arrangements for the building of a new passenger and cargo terminal. We are committed to maintaining and expanding benefits to the elderly and providing new opportunities for education and training for our young people. Government must be responsive, more efficient, and businesslike in our engagement with the public,” he noted.

Prime Minister Skerrit says he is truly humbled by this opportunity to resume and properly conclude his stint of national service.

“I want you to know and understand that wherever life may take me and whatever it shall bring me, I shall always remain an ambassador for the growth and development of Dominica. Mr. President, ladies and gentlemen, I thank you once again for this expression of confidence and I pledge to do all in my power to propel our glorious nation of sustained growth, progress and prosperity for all in a peaceful and idyllic environment. I want to take this opportunity again to congratulate all those who participated in the democratic process of elections by nominating themselves as candidates,”” PM Skerrit stated.

“I will say to the nation, that in an effort to unify the country under the rubric of One People, One Vision, One Dominica, I shall meet with the two independent candidates who won the elections in their respective constituencies, and all candidates who contested the 2022 elections.  As part of a series of such engagements, my hope is that they shall accept my invitation to meet. I will also meet with the leader of the United Workers Party thereafter and our hope also is that the invitation will be accepted. Our country requires all of us to be at the service of our people. The internecine political ramblings in our country must come to a stop,” the Prime Minister added.

Prime Minister Hon. Roosevelt Skerrit will addressed the nation on the evening of Monday, December 12, to reveal the composition of the new Executive Arm of Government, as well as key appointments to postings in Dominica and abroad. The new Cabinet of Ministers shall be sworn into office on Tuesday, December 13th at the State House.

We have 408 guests and no members online