DOMINICA STANDS IN SOLIDARITY WITH CUBA & FIGHTS FOR THE U.S TO END 60 YEAR ECONOMIC BLOCKADE 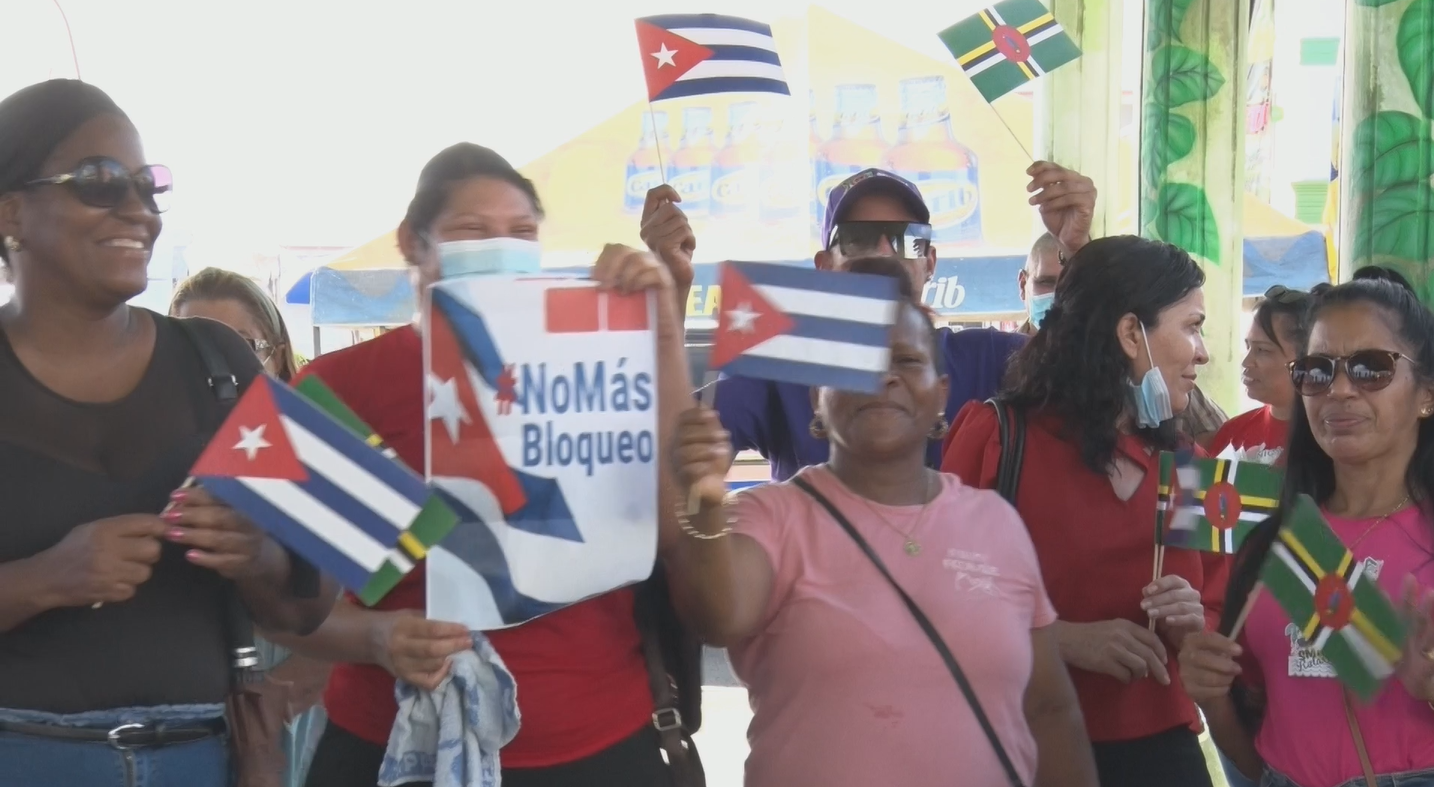 Dominica continues to stand in solidarity with the government and people of the republic of Cuba against the US economic blockade. The Dominica Cuba friendship Association (DCFA) took a stance on Saturday, July 09 to call on U.S.  President Joe Biden to put an end to the hardships imposed on Cubans. The U.S. Blockade creates the main impediment to Cuba’s industrial production and overall economic development.

The mini rally which began on the Roseau Bayfront proceeded through the streets of the Roseau.

Just last month, Prime Minister Hon. Roosevelt Skerrit reiterated his call for the lifting the US trade embargo on Cuba during the ninth summit of the Americas. He also received the highest award in Cuba, the Order of Jose Marti in April of this year.

Minister for Foreign Affairs, International Business and Diaspora Relations, The Hon. Dr. Kenneth Darroux says one cannot place a monetary value on the diplomatic relations and friendship of these two countries. Cuba has contributed significantly to the development of Dominica.

“This continues in spite all the difficulties that Cuba is undergoing right now because of this unjust illegal blockade of more than 60 years. And this is very important because they continue the training of doctors and other professionals,” Dr. Darroux stated.

Dr. Darroux expressed disappointment in the lack of support shown by the region in defense of Cuba during the Ninth Summit of the Americas.

“I don’t think enough was done by the region to put a bit more pressure on our big powerful neighbors up North to let them understand that Cuba has responded to us in our times of need. I mean we are talking about the number one economy in the world and what have they done for us. And look at what Cuba has managed to do and continue to do,” Dr. Darroux noted.

The sixty year blockade has cost the Republic of Cuba billions of dollars in economic growth and development. Notwithstanding this challenge, Cuba continues to foster great relations across the region.

“I want to make a solemn pledge that as long as the Dominica Labour Party remains in Government, we will continue to hold Cuba extremely high and extremely dear to our hearts, unapologetically,” Dr. Darroux announced.

The Foreign Affairs Minister has called for the embargo to be lifted immediately.

“While we recognize the efforts of the US Government in recent times to increase I think the flights to some of the cities in Cuba, I think they also made some headway in terms of the remittances allowed to Cuba and now Visas can be processed in Havana, but we are saying that although a lot of these decisions were taken unilaterally we are saying that Cuba needs to have a seat at the table when these things are discussed. Cuba needs to be there when Cuba is being discussed. And a lot more can be done, yes we recognize and we feel encouraged by these measures but we are asking for much more to be done and we are asking that the US removes and lifts this unjust blockade against Cuba and that they do it now,” Dr. Darroux added. 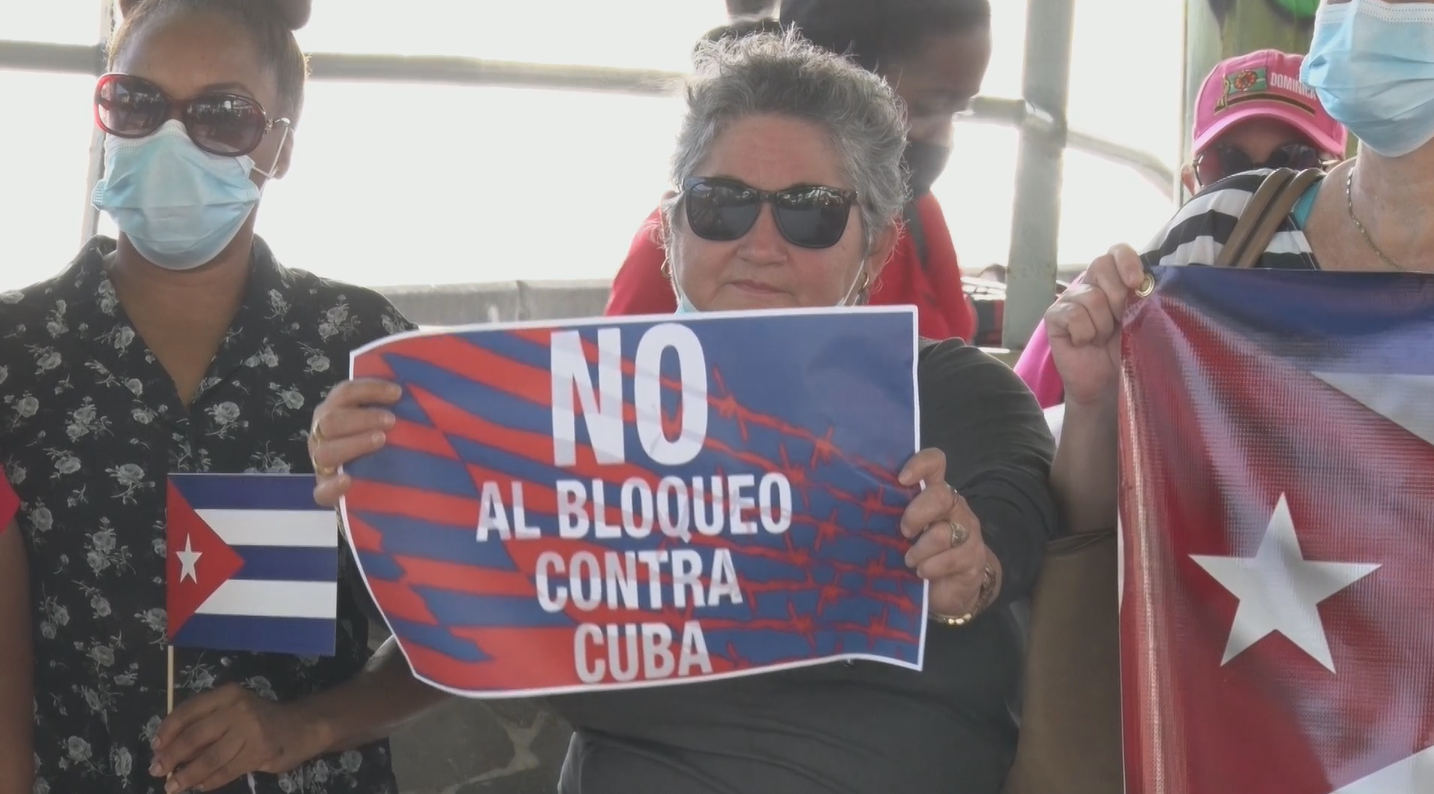 Meanwhile, Cuban Ambassador to Dominica, His Excellency Ulises Arranz Fernández is grateful for the support of the Government and people of Dominica so far.

“I want to thank you for joining us in the battle to end the economic, financial and commercial blockade of the US Government and for defending the sovereignty and independence of Cuba. One day we will celebrate the end of the blockade because we are sure that the global battle to eliminate the blockade will bear fruits. Not only the people of Cuba, but you and the rest of the world and the people of the US itself will be happy when that day comes. Long live the relationship between the people of Cuba and Dominica,” H.E Fernandez stated.

His Excellency Fernandez says while the economic blockade has shown the inhumanity of the U.S., the mini rally organized in Dominica proves that love has won over hate.

The friendship between the Republic of Cuba and Dominica continues to flourish as both countries provide mutual support during times of need. Government has demonstrated support during these difficult times for Cuba.

In April 2021, during the First Session of the Sixth Meeting of the Tenth Parliament, Government passed a resolution for ending the economic, commercial, and financial blockage imposed by the United States of America against Cuba and the removal of Cuba from the list of state sponsors of terrorism.

We have 395 guests and no members online