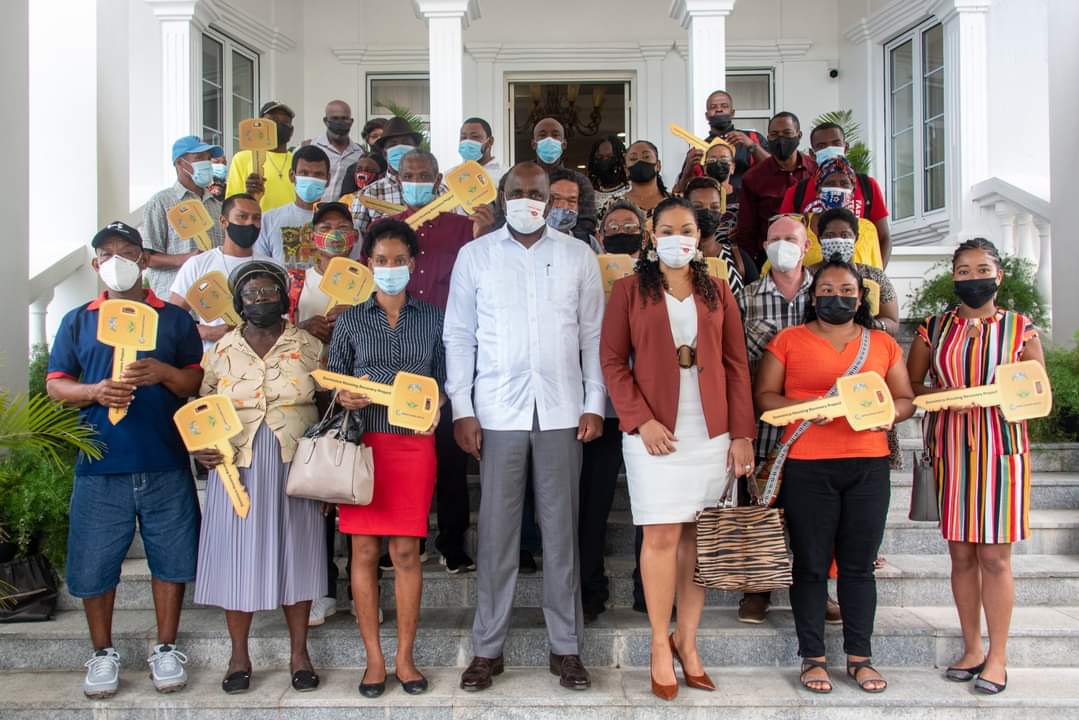 Fifty seven families have received keys to new homes as the Government of Dominica continues to provide resilient homes to vulnerable citizens as part of its housing revolution.

These homes were constructed and handed over under the World Bank funded Housing Recovery Project, which is a direct response to the devastation caused by Hurricane Maria.

Prime Minister, Hon. Roosevelt Skerrit says that this handing over of keys is a celebration as there are now fifty seven less vulnerable families in the country.
“And this is why it is a celebration because whether it was one home we were giving today, one key we were giving today, it is progress. Because it means therefore that we would have one less vulnerable family in Dominica. But today, today we have fifty-seven families who are no longer in a vulnerable state come midday today.  And so this is a major investment. And we heard that a hundred and eighteen of those homes are under construction as we speak. And mark you, this is only one part of the housing revolution, just one component,” Prime Minister Skerrit stated.

Project Manager for the Dominica Housing Recovery Project, Mr. Nicholas Bruno says that over the next few months, keys will be handed out to homeowners as the project continues.

“Many challenges are being experienced, inclusive of rising prices of building materials, shortage of essential materials and difficulties in accessing some sites. The Unit wishes to applaud the contractors, some of who are present today, for their commitment to this life changing experience for the most vulnerable among us. Over the next eighteen months the Government of Dominica will provide keys intermittently to beneficiaries as houses are complete. To this date, two hundred contracts have been awarded for houses across Dominica with construction at various stages of completion,” Mr. Bruno explained.

Parliamentary Representative for the Roseau Central Constituency, Hon. Melissa Poponne-Skerrit says that this key handing over ceremony is even more evidence of Government’s commitment to providing housing for the most vulnerable in our society.

“This is another wonderful, celebratory occasion for this Government and the people of Dominica as we continue to respond to the housing needs of our citizens. Once again I stand proud to be a part of this Government which fully embraces its responsibility to secure the well-being and the comfort of our people particularly he most vulnerable among us. This Government’s housing programme is consistent and targeted and is meeting the basic human necessity for shelter for many in Dominica who will otherwise not be able to access safe and resilient housing,” Hon. Poponne-Skerrit noted.

Senior Minister and Minister for Housing and Urban Development, Hon. Reginald Austrie says this is another major milestone for the Government’s housing revolution.

He noted that while Government could have invested these funds in another sector, the Labour Party Administration recognizes the importance of resilient housing to its citizens.

“The Prime Minister could have asked for money for several other things cause the entire country was devastated; roads, tourism, bridges, you name it; and he could have asked for money for any one of these sub sectors. But because of the importance that we place on housing, and we understand the benefits of having a decent and comfortable home for you and your children, we thought that housing was an urgent priority for the people of Dominica. And it was keeping in line with our thrust because for the past how many years, we have been pursuing this housing revolution because we recognize that housing was an important issue and we realized that we had to do something about it, because had we left it up to the people, some of them would never be able to construct a decent home for themselves and their families,” Senior Minister Austrie stated.

We have 353 guests and no members online