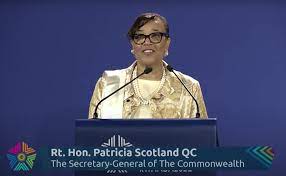 Dominican born; The Right Hon. Baroness Patricia Scotland has been reelected as Secretary General to the Commonwealth. The decision was made on June 24, during the Executive Session of the 26th Commonwealth Heads of Government Meeting (CHOGM) In Kigali, Rwanda where she gained twenty-seven votes. Scotland was standing against Jamaica’s Foreign Affairs and Foreign Trade Minister Kamina Johnson, who obtained twenty-four votes.

She was elected to the post at CHOGM summit in Malta in 2015, and took office on April 1, 2016, becoming the second Secretary-General from the Caribbean and the first woman to hold the post. Her term was due to conclude in 2020, but was extended because the Commonwealth Summit scheduled for that year could not take place due to the covid-19 pandemic. Having served six years instead of four, she will now serve a second term of just two years.

“Together we have been friends in food times and in bad, voices for the voiceless, advocates for development and progress. We have laid the foundations for transformational change and I am determined that when the role of Secretary General rotates to Africa two years from now I will hand on the baton with a stronger, more effective, more powerful Commonwealth than ever before. I have an unshakeable belief that we can take our Commonwealth to new heights, to hold our values ever closer and to set an example for the whole world,” Hon. Scotland stated.

The Secretary General of the Commonwealth enforces the need to be imperative in the midst of new and decisive shifts in the world. She believes those values will shape the choices we make in the hours and days ahead.

“The economic damage of covid-19 and mounting debt confronts us all. The rapid intensification of climate change pose an existential threat. The tremors of conflict and instability in our world, the spiraling cost of food and fuel and economic uncertainty threaten a serious and protracted crisis. This struggle is first and foremost an opportunity to find answers to these questions. It will not be easy. We will have to dig deep. We will have to respect each other and find what joins us. Scotland noted.

Hon. Scotland says now is the time to make tremendous strides towards unity and other areas of common value.

“We must trust each other. We must talk and listen to each other and give all that we have to achieve progress for the 2.5 billion people we all represent. But here in Rwanda, something else is at stake. Something even more transformational. The world is changing. People are anxious. I understand the pressure on each and every head of state today. The last few years have shaken the kaleidoscope, but before the pieces settle we have an opportunity right here, right now to show the world what real unity, real solidary, real cooperation and real progress looks like,” the newly reelected Commonwealth Secretary General added.

Prime Minister of Dominica, Hon. Roosevelt Skerrit was also present at the CHOGM. He has always been an advocate for Baroness Scotland reelection.

We have 208 guests and no members online