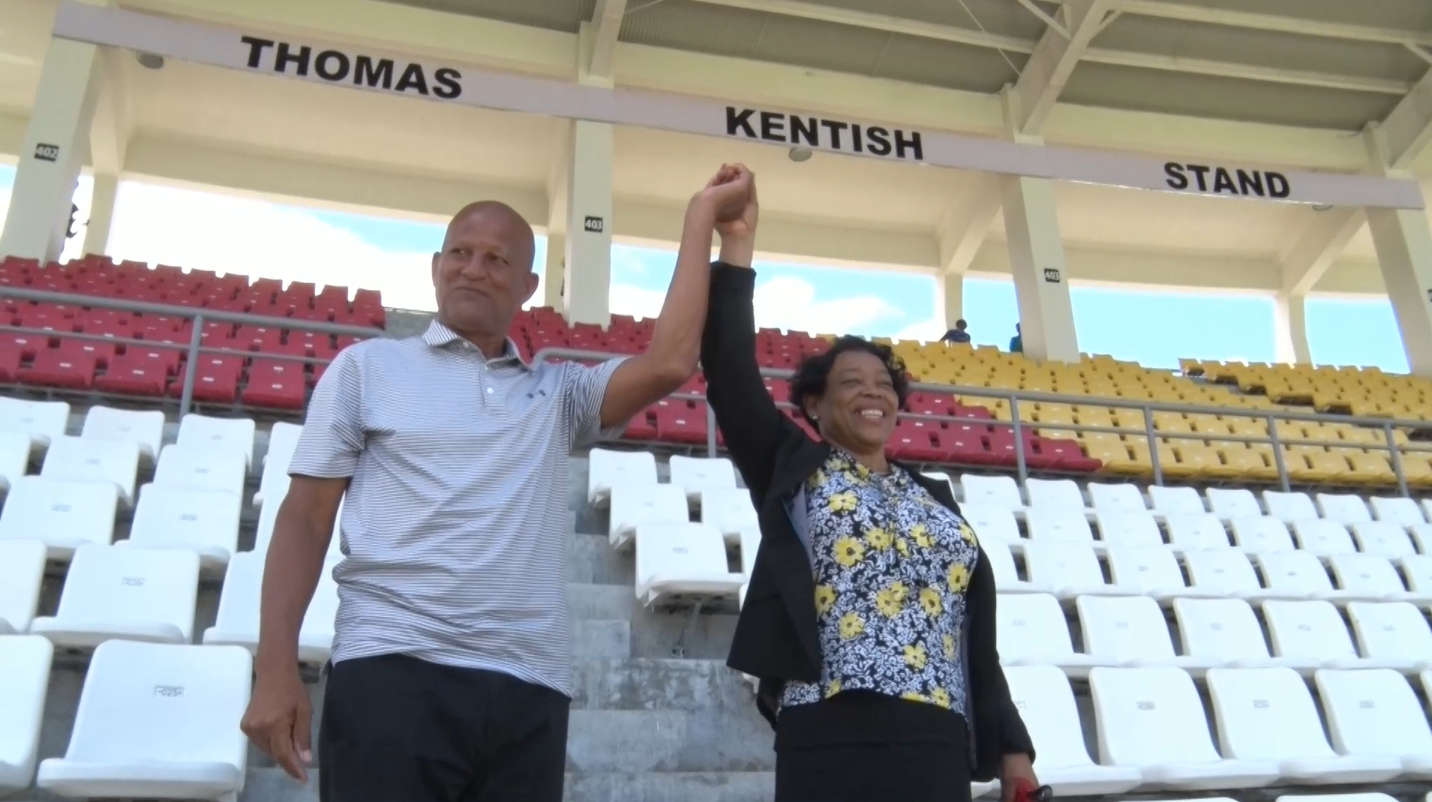 The Government of Dominica through the Ministry Of Sports, Culture, and Community Development has renamed the East Stand at the Windsor Park Sports Stadium in honour of local cricket legend Mr. Thomas Kentish.

A naming ceremony was held on Friday, June 24 2022 at the stadium, and was attended by Members of Cabinet, members of his family, and other sports personalities.

Mr. Thomas Kentish represented Dominica in football and cricket for many years. He represented Dominica nationally from the age of 14 until his retirement. He also played first class cricket firstly with the combined islands and then later for the Windward Islands. He ended his first class career with a man of the match performance of six for sixty-nine against Barbados.

Acting Prime Minister and Senior Minister, Hon. Reginald Austrie stated that this a major achievement going on to congratulate Mr. Kentish on the honour.

“This for us is a simple gesture of appreciation and love for the contribution that you have made to Dominica. I want to extend to you Thomas Kentish on this occasion our congratulations on your dedication and your commitment and your discipline,” Hon. Austrie stated.

Hon. Austrie says that Mr. Kentish’s accomplishments are a result of his hard work and discipline adding that the Government and people of Dominica thanks him for his contribution to the country.

“You are dispelling that myth that you have to have all these fancy facilities to succeed.  But I believe that it is commitment, dedication and discipline is what has taken you so far and have you here in our midst today. On behalf of the Government, particularly the Prime Minister, we want to extend to you our thanks and our gratitude to you for this tremendous contribution that you have made and continue to make to our country,” the Senior Minister noted.

Minister for Sports, Culture and Community Development, Hon. Roselyn Paul says this ceremony is an opportunity to say thank you to an exemplary citizen.

“This ceremony is one which provides us the opportunity, not only to honour outstanding achievements to nation building or simply the naming of a stand, but one which provides the opportunity to say thank you and to highlight the contributions of yet another exemplary citizen of our beloved Dominica; and as an inspiration to many of our young sportsmen and sportswomen in Dominica,” Hon. Paul stated.

She outlined the criteria used to select persons as nominees for this honour.

The Sports Minister says that Mr. Kentish has served Dominica through sports for almost fifty years as both a player and a coach.

Guest of honour, Mr. Thomas Kentish thanked the Government, saying that his contributions were not for recognition but for the opportunity to represent his country.

“I would like to thank the Government of Dominica for bestowing that honour of naming the East Stand after my name. I came into sports, not with that on my mind. That was my gift, my talent and I just came out and represented the country with everything I had. Just humble and at the end of the day I thought it could inspire the younger players; just to be humble and represent your country whether you play football or cricket. So that’s what my legacy is all about” Mr. Kentish stated.

Mr. Kentish says that he is honoured to have his name ingrained next to his mentors in the national stadium.

“It’s an honour for my name to be just a stone throw away from where I live, where I was born and raised. And then to have my name in the park with people like Billy Doctrove, Clem John, Kelleb Laurent, Norbert Phillip, Adam Stanford; there people were my mentors so I followed their footsteps. There was a lot of time I played football, I played cricket without getting anything but the most important thing to me was that this was my contribution to Dominica,” Mr. Kentish added.

Joseph Kentish, who is the older brother of thomas Kentish says he is elated to see his brother recognized in such a he way by the country adding that he is also humbled to be called his mentor.

“I am exceedingly elated and I believe that this has been well deserved and merited. I feel humbled, very much like how he is humble. And if he says that well I just have to go along with it,” Joseph Kentish stated.

Meanwhile, Grandniece of Mr. Thomas Kentish, Ms. Aaliyah Abraham, says it was a privilege to be able to grow up with him as a part of her family.

“I am really proud of him. He worked hard all his life. Cricket and football are his life. He is very dedicated to sports whether it be cricket or football so I am really, really proud. He is really the motivation of his family. He is the one to push us to do better and be our better self even if our field isn’t sports. My field is more science but he has always pushed me to do better, and be the best in what I do. So it was really a privilege having him as a part of my family and I hope that every family has somebody like TK in their family to just push them to do their best in whatever they decide to do,” Ms. Abraham stated.

We have 234 guests and no members online