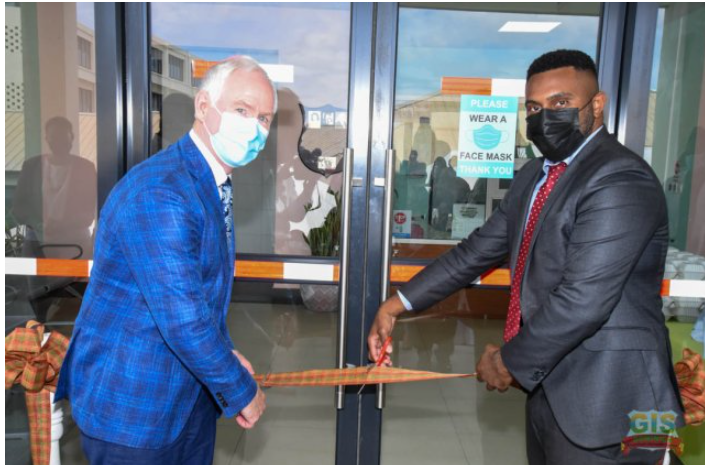 The new Brenda Strafford Foundation Eye Centre has been commissioned at the Dominica China Friendship Hospital.

This fully equipped centre is another step towards a resilient and modern health system that will serve Dominicans and patients from other Caribbean islands.

Minister for Public Works and the Digital Economy and Featured Speaker, Hon. Cassanni Laville noted that this facility will aid the Ministry in giving effective care to citizens.

“We will see the establishment of a world class facility for eye care right here in Dominica China Friendship Hospital. This is major achievement for our health system is yet another strategic accomplishment in our ongoing efforts to provide more equitable and effective health care services to our citizens,” Hon. Laville stated.

Parliamentary Secretary in the Ministry of Health, Wellness, and New Health Investment Hon. Kent Edwards, who represented the Minister Hon. Dr. Irving McIntyre, stated that the new clinic falls in line with Dominica’s Sustainable Development Goals. He thanked the Foundation for the assistance that they have given to Dominica over the years.

“This facility is more conducive to providing care to our people and will indeed provide a better work environment for all the staff. The Ministry can boast of our eye care services being on par with that of the wider world. We look forward to continued collaboration with the Brenda Strafford Foundation and thank the foundation for its assistance which has given the Ministry of Health a long boost,” Hon Edwards stated.

Head of the Ophthalmology Department at the DCFH, Dr. Hazel Shillingford-Ricketts stated that although Dominica has seen great development since the establishment of the eye department, this new eye centre can become a center of excellence.

“I can promptly state that despite the difficulties and frustration at times, Dominica has made tremendous strides in eye care from the time of the establishment of the Department of Ophthalmology  funded by the Brenda Strafford Foundation back in 1985 to the formal commissioning of this facility today the 12th day of May 2022. Going forward, expect the Brenda Strafford Foundation Eye Centre to be a centre of excellence in eye care,” Dr. Shillingford-Ricketts stated.

Officer on Charge of the Office of the Chief Executive Officer of the Dominica’s Hospitals Authority, Mrs. Nicole Laville said she is “proud to celebrate this momentous commissioning and celebrate this milestone achievement.”

Mrs. Laville who referenced the old saying ‘to whom much is given, much is expected’ noted that the ophthalmology department has received a lot of assistance from the Government of Dominica who provided staffing, material resources and a new state of the art facility for ophthalmologists to practice medicine; a conducive environment for staff to work and for patients to receive the best care.

She also noted that much has been given through philanthropy including medical technology and expertise from the Chinese Government, and the significant contribution of the Brenda Strafford Foundation in providing state of the art specialized eye equipment to modernize the delivery of eye care services in Dominica.

“Much is expected to deliver leverage space, talent and expertise and technology to provide an optimal package of eye care services to the resident population.  We must now commit to the timely provision of access to treatments and interventions for specialized eye care by a team of highly trained and experienced ophthalmologists supported by technicians, technologists and support staff. We must now commit to manage and wrestle down our waiting times for appointments and routine eye care,” Mrs. Laville stated.

Executive Director of the Brenda Strafford Foundation, Mr. Mike Conroy committed the support of the foundation in providing excellent service to patients in Dominica and around the Caribbean.

“We hope that this eye center will act as an important and impactful hub for research, clinical education and practice innovation, in partnership with their Caribbean countries in order to leverage the substantial expertise and technology to the benefits of patients throughout the Caribbean. We look forward to supporting this objective,” Mr. Conroy noted.

We have 188 guests and no members online