GEOTHERMAL POWER PLANT FOR DOMINICA BY 2023 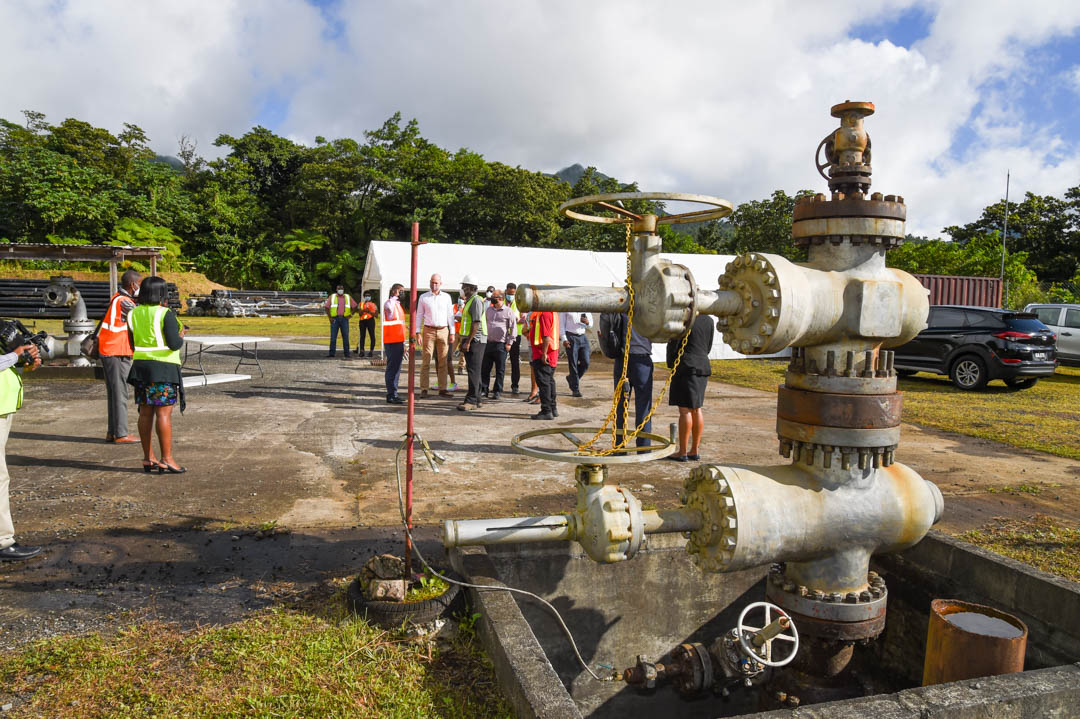 Dominica will have a geothermal power plant by the end of 2023.

This has been a long time goal of the Labour Party Administration, a goal that they have taken many steps towards as Government continues to rebuild a modern and resilient nation.

On a visit to the site on Thursday, January 13 2021 with the British High Commissioner to Barbados and the Eastern Caribbean, His Excellency Scott Furssedonn – Wood, Minister for Planning, Economic Development, Climate Resilience, Sustainable Development and Renewable Energy, Hon. Dr. Vince Henderson stated that despite the uncontrollable delays the project has met since its inception, he is confident that the completion date will be met.

“One of the things that I think this pandemic is teaching us is the greater need for having indigenous sources of production. And in this case it is energy and we are very fortunate in Dominica. I am very happy that our friends in the United Kingdom, the Government of the United Kingdom continues to be steadfast in their support to us and we are now in a position to push through this project and hope that we can see work started with the actual construction of the power plant by the summer of this year,” Dr. Henderson stated.

The Minister explained that reviews had to be made to the design following the passage of Hurricane Maria, going on to thank the UK Government for their continued support on this project.

“Interestingly after Hurricane Maria we went back to the drawing board, redesigned the project and went back to them and said we want to do this, are you still willing to provide the support and they were very supportive and now they are here with us. We have gone through several challenges and they are still steadfast in their support because they believe in this project and just like we do. And we are grateful that we have friends who continue to encourage us,” Dr. Henderson added.

Meanwhile His Excellency Furssedonn-Wood stated that this is an important project for Dominica as a geothermal power plant has the potential to be a significant source of income for the country.

“Our partnership with Dominica is a really important one. It is an important one for the British Government. It is one that we have invested a great deal in and I know also that is an important partnership for the people and Government of Dominica because we are contributing directly to all of your efforts to increase your owner resilience; your resilience to the effects of climate change and your economic resilience. And this geothermal project is a really important example of that because the potential here is not just to make this island energy independent, and to generate all your electricity from renewable sources but there is also the amazing potential for you to generate electricity and drive your own prosperity through that very significant source of income,” H.E Furssedonn-Wood explained.

The Commissioner went on to say that the funds will be used for numerous projects around Dominica including health facilities.

“Well our total commitment is something like 70 million pounds, or a 100 million US dollars and that is going directly to support CREAD and your climate resilience efforts. It is going to support the road project as well water projects, and also an investment in skills for young people from disadvantaged backgrounds. I’ve also worked with the smart health centres to ensure that your health facilities are climate resilient so I hope the commitment will assist in a range of areas across your national life,” H.E Furssedonn-Wood noted.

Five wells have already been drilled in the reservoir at the centre of the project, among them, one production well and one re-injection well.

The expected output from this well will be above 20 mega-watts of electricity.

We have 544 guests and no members online