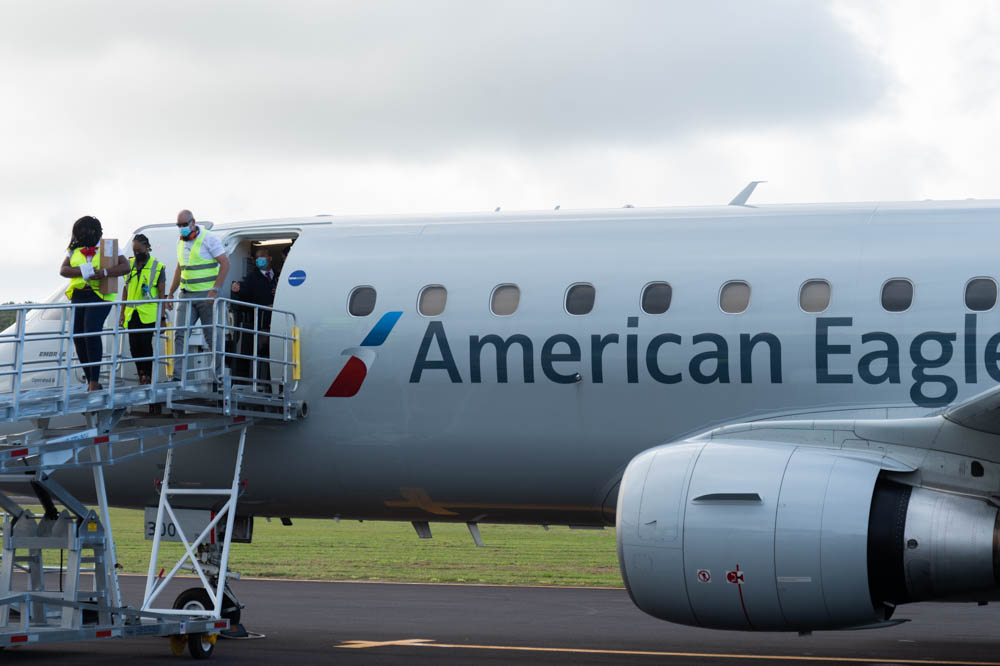 The improvement of air access into Dominica has been a long time priority of the Labour Party Administration, a goal that has moved closer as America Airlines launched their direct flight service to Dominica last Wednesday.

Flight 3579, a direct, commercial flight from Miami, USA, landed at the Douglas-Charles Airport with seventy-two (72) passengers on board.

“This is game changer for us. As you know one of the challenges to come in to Dominica has been air access or access on a whole to our country. We have articulated our goal to reach over two hundred thousand stay over visitors by 2025 so having American Airlines in the mix, with the three flights weekly, will add an additional eleven thousand seats to the destination and that will significantly assist us in achieving this goal” Hon. Charles stated.

The Minister noted that access into Dominica has been a huge priority for Government and upon her appointment as Minister for Tourism, she embraced the challenge.

She stated that the Ministry has been in discussions with various airlines, discussing the challenges that they face in establishing direct service to Dominica.

“Part of the way we went about is that we analyzed what are our challenges in getting airlines to come to Dominica; and we recognized that given the technical challenges with Douglas Charles Airport the type of aircraft was critical. So we advanced our discussions with a few airlines that we knew had that type of aircraft, including America Airlines, Delta Airlines, and United Airlines. And discussions were in an advanced stage with Caribbean Airlines just before the pandemic and that came to a halt and we also had advanced discussions with Silver Airways but they had a challenge in finding that particular aircraft that could safely land at Douglas Charles Airport. So we engaged American Airlines, and here we are now with direct service to Dominica,” the Tourism Minister explained.

Hon. Charles went on to say that timing played a huge part in the establishment of a partnership between Dominica and American Airlines, as the Ministry reopened discussions with the airlines at the same time that they were looking to expand to more Caribbean countries.

“What recently happened for us, is that in 2020 the envoy team of American Airlines took over the Miami operations and this team of people are quite familiar with our destination in particular the Caribbean and Dominica because they worked for American Eagle. They were relooking their strategy especially since the pandemic the Caribbean became a safe haven for travelers. So they decided to relook their strategy and to focus on destinations that were under served in the Caribbean. At the same time, through our consultant and some good friends at American Airlines we reengaged American Airlines during that same period when they were relooking their strategy. So it was just the perfect timing and so the partnership developed and in quick time they decided to have a proving flight to Dominica which was very successful,” Hon. Charles added.

We have 462 guests and no members online