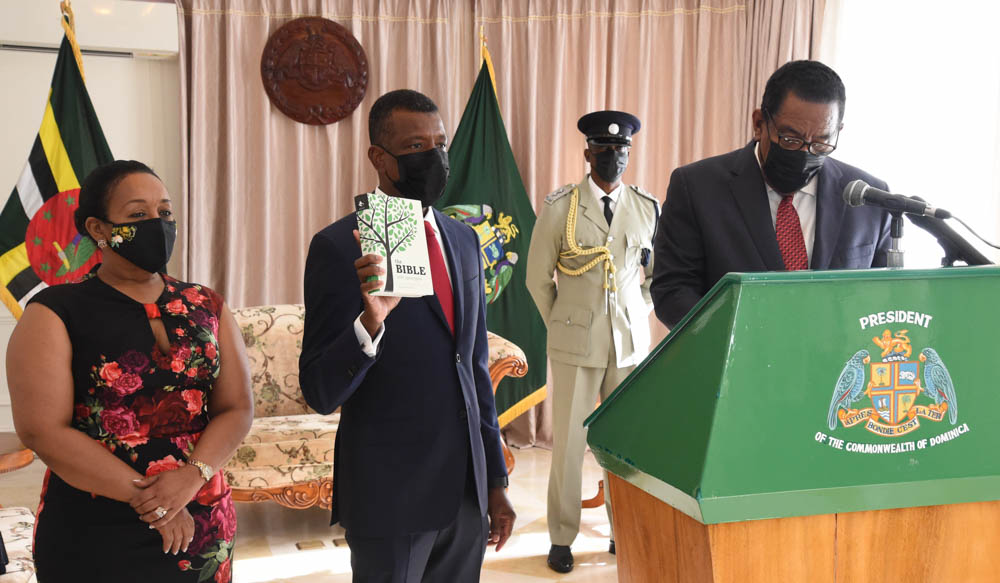 Dr. Henderson was sworn in on Thursday December 2, 2021 at the State House, where President of Dominica, His Excellency Charles Savarin administered the Oath of Office.

President Savarin, who served as a minister alongside Dr. Henderson from 2000 to 2009, congratulated the new Minister on his appointment and expressed confidence in his ability to serve in his new position.

“First of all let me congratulate you on your election in Grand Bay...and on your appointment as a Minister of Government. I have no doubt having served with you in the Cabinet as a Minister, and I have no doubt that the Cabinet, the people of Grand Bay, and the people of Dominica will in fact be well and truly served by you in your capacity. So congratulations Vince,” H.E Savarin stated.

Dr. Henderson stated that he looks forward to serving in this new role and helping in the development of his constituency and the country by extension.

“I look forward to serving as a member of Cabinet and I hope that I can make a contribution that will help and will advance the cause of the people of the Grand Bay Constituency and Dominica as a whole. I have had the opportunity to serve before in several capacities and I embrace the opportunity to serve in this new portfolio,” Dr. Henderson stated.

The newly sworn in Minister noted that he will use his training and experience while managing his new portfolio and working towards making Dominica the world’s first climate resilient nation.

“It gives me the opportunity to bring to bear the experience as well as the training that I have had in matters pertaining to my portfolio and in particular renewable energy as this has been my work over the past decade and perhaps one could even say beyond that. I also look forward to working in advancing the policies that have already been articulated by our Prime Minister in making Dominica the first climate resilient island nation in the world,” the Minister went on to say.

Dr. Henderson added that he looks “forward to performing in that role and to ensure that I can give support to my colleague who themselves have been burdened with dealing with the many challenges that Dominica has been faced with,” adding that “I look forward to serving in the Cabinet of Ministers and to ensure that I can assist in moving Dominica forward as we seek to build a Dynamic Dominica.”

We have 394 guests and no members online