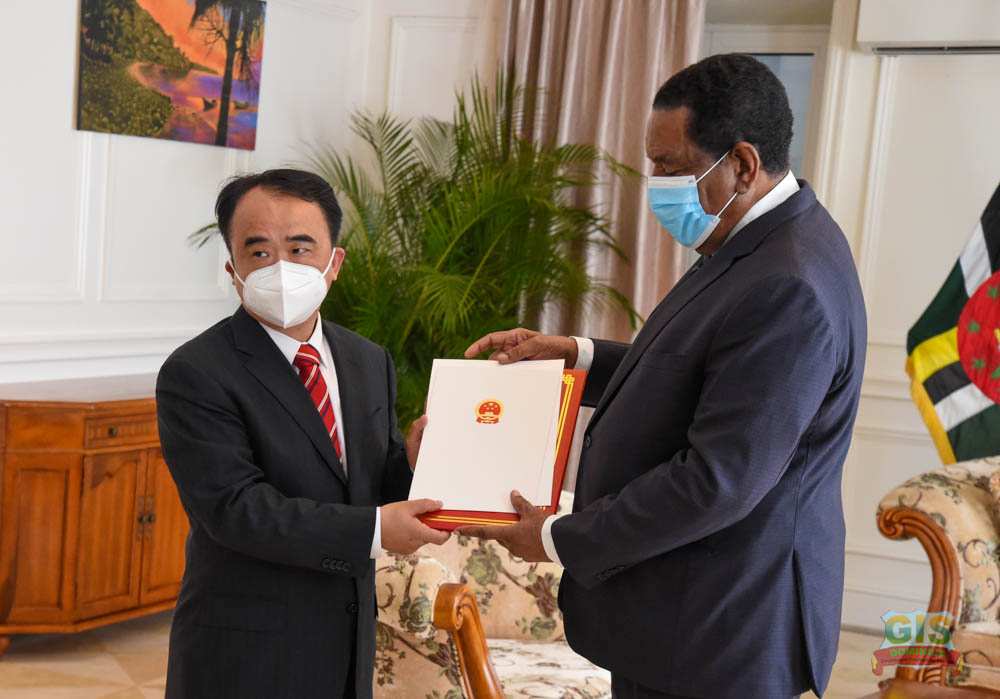 Dominica has welcomed a new Chinese Ambassador as Ambassador Lin Xianjiang presented his credentials to President of Dominica, His Excellency Charles Savarin.

The ceremony took place on Monday, November 22 2021, the first in person credential presentation since the emergence of Covid-19 in Dominica.

President Savarin stated that he is hopeful that this relationship is strengthened as both countries works towards development in various sectors.

“The Government and people of Dominica highly value our relations with the People’s Republic of China and the unwavering bond of friendship and cooperation which already exists between Dominica and China. It’s our wish that this bond of friendship will be heightened and further strengthened in the years to come, and that our cooperation, particularly in the areas of renewable energy derived from our significant geothermal reservoirs, and potable water resourced, both of which Dominica has in abundance, will flourish,” H.E Savarin stated.

President Savarin noted that the China has been one of Dominica’s most dependable and reliable partner since the establishment of diplomatic relations in March of 2004.

“Dominica has benefited and continues to benefit significantly through fruitful bilateral exchanges and cooperation in infrastructural development, education, health, agriculture, trade and other areas. Additionally China always stands ready to work with Dominica to bring bilateral relations to newer higher heights to the benefits of both our countries and people,” President noted.

The President went on to make mention of the various projects in which China has assisted Dominica over the years, including the E.O Leblanc Highway, the construction of the Windsor Park Sports Stadium, the Dominic State College, the State House, the West Coast Post Hurricane Maria Rehabilitation Project to include the Batalie Macoucherie and Pointe Round Bridges and the new ongoing modern state of the art Dominica China Friendship Hospital.

President Savarin also made mention of the Chinese Agricultural Mission which has been on island since 2005 providing support to local farmers in various areas. He then extended welcome to two Chinese engineers who will soon arrive in Dominica for preliminary work on the new Agricultural Science Complex Building.

“We therefore are heartened by the news that two Chinese Engineers will be arriving in Dominica at the end of November 2021 in order to commence preliminary works for the construction of the China Aid Project of the new Dominica Agricultural Science Complex Building to be located within the One Mile Agricultural Station in Portsmouth. This project, which seeks to further enhance the Dominica-China agricultural cooperation, will greatly contribute to our quest to transforming agriculture, one of the mainstays of the economy, to a more resilient and sustainable sector,” President Savarin went on to state.

The President also thanked China for the tremendous assistance that Dominica has had, and continues to receive from the Chinese Government in multiple areas of Dominica’s development, going on to reiterate that “Dominica’s Government is firmly committed to the One China Policy and the peaceful reunification of China.”

Meanwhile, Ambassador Lin Xianjiang stated that China has placed high importance on the continued growth of its relationship with Dominica.

“In the face of Covid-19, China and Dominica have come together in solidarity to fight the virus writing a new chapter of friendship between our two countries. China places high importance on growing aspirations with Dominica and stands ready to work with Dominica to build on the good foundation and bring our relationship to a new height,” His Excellency Lin Xianjiang stated.

We have 425 guests and no members online