GRAND BAY PRIMARY TO BE RENAMED IN HONOUR OF THE LATE HON. EDWARD REGISTE 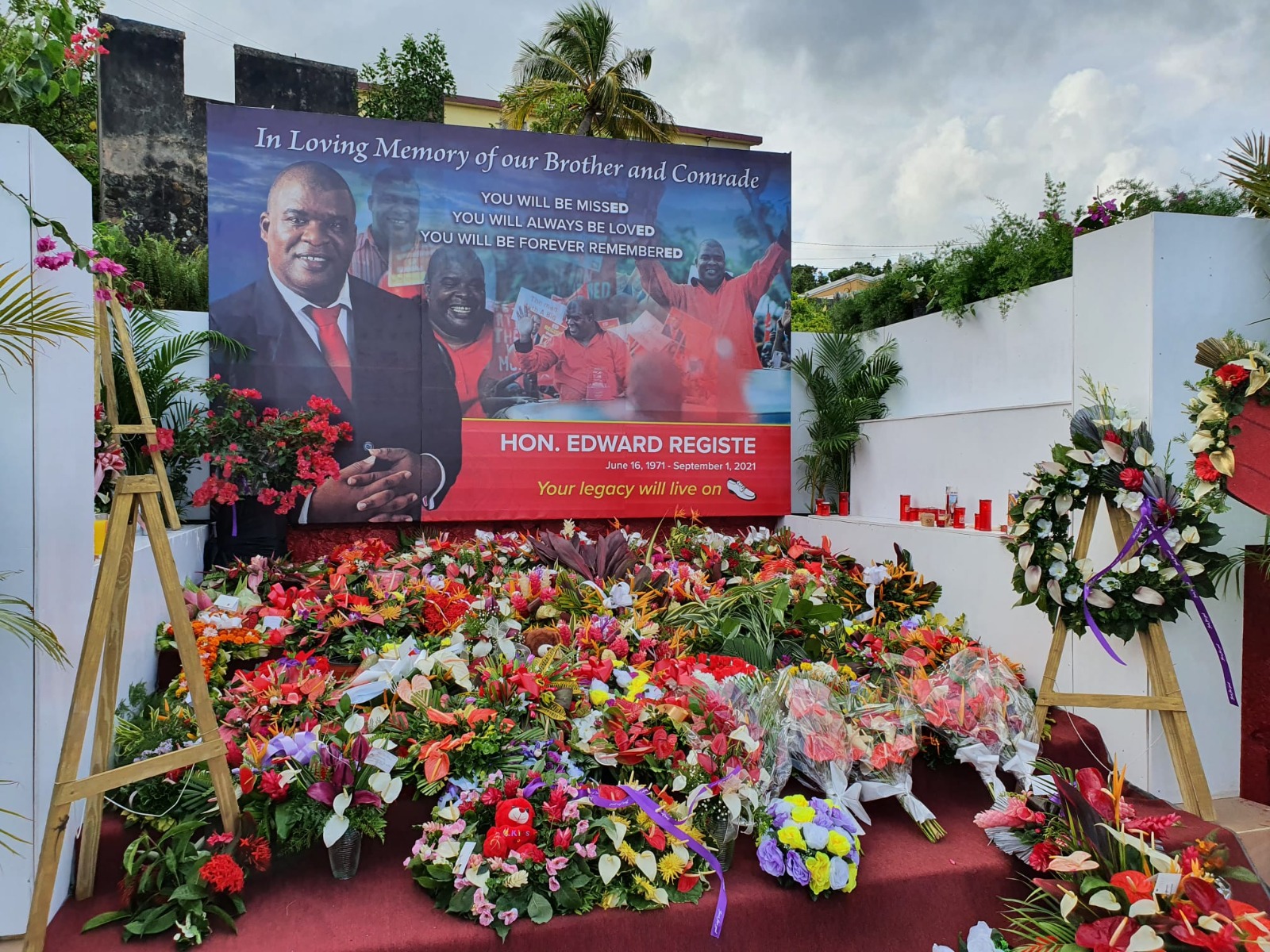 The former Parliamentary Representative and Minister of State in the Ministry of Foreign Affairs, International Business and Diaspora Relations died in the early hours of Wednesday, September 1 2021 at the Dominica China Friendship Hospital.

A tribute ceremony was held in Grand Bay on Saturday September 11, 2021 in honour of the work and contribution that Hon. Registe has put towards the development of the Grand Bay Constituency.

Prime Minister of Dominica, Hon. Roosevelt Skerrit stated that since being elected as Member of Parliament for the Grand Bay constituency, evidence of Hon. Registe’s hard work can be seen all around the constituency in every sector.

“When he became Parliamentary Representative for the Grand Bay Constituency in December 2019, he simply continued his mission to empower every constituent with access to education, improved housing and a better standard of living. In such a short space of time we have seen the results of his hard work. Over 35 families have moved into new homes and plans are well advanced for an additional sixty new homes to be constructed for the people of Grand Bay. Work is near completion on the Grand Bay Playing Field, a project that was very important to Ed as he wished to see sports return to the community following the devastation of Hurricane Maria,” Hon. Skerrit stated.

One of the projects that the late MP was passionate about was the rehabilitation of the Grand Bay Primary School.

“Ed was also passionate about the rehabilitation of the Grand Bay Primary School and it truly pains me that he will not be there to see the results of the project to which he was so committed. This particular project I believe shall be completed in memory of Ed and regarded as a tangible example of the projects he championed while alive. In this regard, when the Grand Bay Primary School is completed it shall be renamed the Edward Registe Primary School,” PM Skerrit announced.

“His sudden passing has also reinforced our commitment in Cabinet to seek to implement the many plans and programmes that Ed recommended. This I believe is the greatest honour we can pay to Ed to achieve the dreams and aspirations for a better more progressive Grand Bay,” the Prime Minister went on to say.

As part of the tribute ceremony, a billboard in honour of Hon. Registe was unveiled PM Skerrit stated that he hopes that the billboard serves as a reminder of the man that the country has lost and his contribution and love for his people and country.

“I am honoured to be here today with his mother Mrs. Magdalene Registe to unveil this billboard in remembrances of Ed, who with all of his contributions at the community and national level, Ed was first and foremost a family man who cared to the end for his parents, sisters, and other close relatives. This gesture by the Dominica Labour Party allows us to remember the man with a good heart, who loved his family and friends unconditionally. He was a champion for his family, a champion for Grand Bay, a champion for the Dominica Labour Party and a champion for Dominica. We grieve his loss but remember always, his exceptional leadership at a community and national level. His commitment to the advancement of his people and country and his love for his friends, constituents and family,” PM Skerrit added.

We have 166 guests and no members online