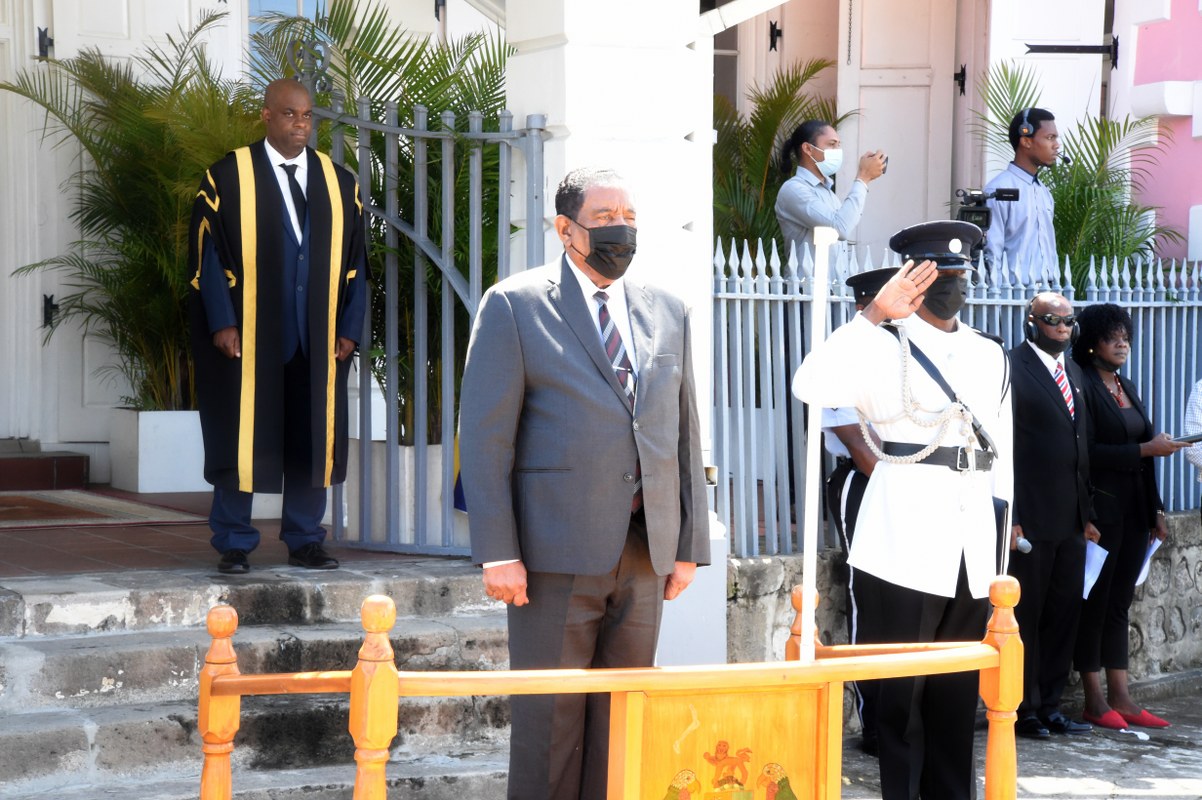 President of Dominica, His Excellency Charles Savarin has commended the Government of Dominica for the progress made during the pandemic.

With the pandemic coming less than three years after the devastation caused by Hurricane Maria, Government is still working on fully recovering from the impact.

President Savarin stated that the country suffered setbacks due to the onset of the Covid-19 pandemic, which resulted in Government readjusting its recovery plans to accommodate the obstacles posed by the global pandemic.

“We have made and continue to make significant strides in our national recovery and reconstruction efforts particularly in the aftermath of Tropical Storm Erika and Hurricane Maria, although we have suffered significant setbacks, as focus and resources had to be diverted to address the COVID-19 pandemic.  Government therefore took an in-depth look at the significant impact of the COVID-19 pandemic in its health, economic, social and fiscal dimensions and adjusted its post Erika and post Maria recovery and reconstruction plan to make the country and the economy more resilient and responsive to the unprecedented circumstances of the COVID-19 crisis,” President Savarin stated.

The president then highlighted some of the major developmental projects and decisions that Government has started despite the impact of covid-19.

“Consequently, we have been able, after some delay, to proceed with a series of plans and programmes that are geared at ushering our country into a new development paradigm.  These include: the development of the new International Airport;  continued progress with our Geothermal Energy Programme;  our new Road Infrastructure Development Programme;  our new Dominica-China Friendship Hospital and the new  North East Hospital in Marigot that are nearing completion;  twelve (12) new Health and Wellness Centres;  our Housing Revolution Programme;  our International Hotel Construction Programme;  focusing on reviving  the agricultural and fisheries sectors;  ushering in our new digital economy initiative;  development of a Cruise Port and Cruise Village at Woodbridge Bay and a major hotel on the site of the old Public Works Garage; and  continued efforts in improving air access into Dominica via the Douglas Charles Airport, resulting in an announcement by American Airlines in its Press Release of July 23, 2021, that as at December 8, 2021 it will be launching its new international direct service from Miami to the Douglas Charles Airport in Dominica, to be operated on a biweekly basis (Wednesdays and Saturdays),” President Savarin listed.

He commended the Government for making decisions aimed at accelerating the transition to a new Dynamic Dominica including the signing of a contract for what will be Dominica’s biggest infrastructural project, the development and construction of the International Airport.

“First and foremost, is the signing of an agreement to undertake the single largest infrastructural project that this country will witness – the construction of the long awaited International Airport. Dominica needs to build its international airport not because other islands have international airports but because we are transitioning our economy from an agriculture and goods based economy to a tourism and services based economy, and an international airport is critical for the development of this new thrust in our tourism and services based economy and to support our expanding hotel sector.  A vibrant tourism sector will bring thousands of jobs to a cross section of the population, stimulate the commercial sector and create markets for the produce of farmers, fishers, craft workers, processors and manufacturers.  The entire economy and population stand to benefit, and therefore we must all embrace the International Airport unreservedly,” President Savarin noted.

The President also commended Government’s decision to pass the Hospitals Authority Bill which was passed in an effort to further improve health care in Dominica.

“The passage of the Dominica Hospitals Authority Bill at the Seventh Meeting of the First Session of the Tenth Parliament on Monday, 28th June 2021.  This Act is one of five pieces of legislation which taken together are expected to enhance the delivery of health care services to the citizenry with a strategic focus on strengthening accountability and transparency within an accreditation framework thereby placing our hospital services on a level to offer high end services not just locally but regionally and internationally,” President Savarin went on to state.

He added that Government’s decision to enact fiscal legislation will increase transparency while also putting the country in a position to better deal with future economic shocks.

“And thirdly, responding to the call from the Eastern Caribbean Currency Union (ECCU) to all member countries of the Union to enact Fiscal Responsibility Legislation. This legal framework which is still to be approved by this Honourable House, is simply meant to reinforce financial discipline across Member States and to reduce fiscal deficit.  Ultimately, this would increase transparency in Government’s management of public funds and put the country and the sub region in a position to better respond to future health, economic, social or climate-related shocks,” President Savarin added.

We have 272 guests and no members online