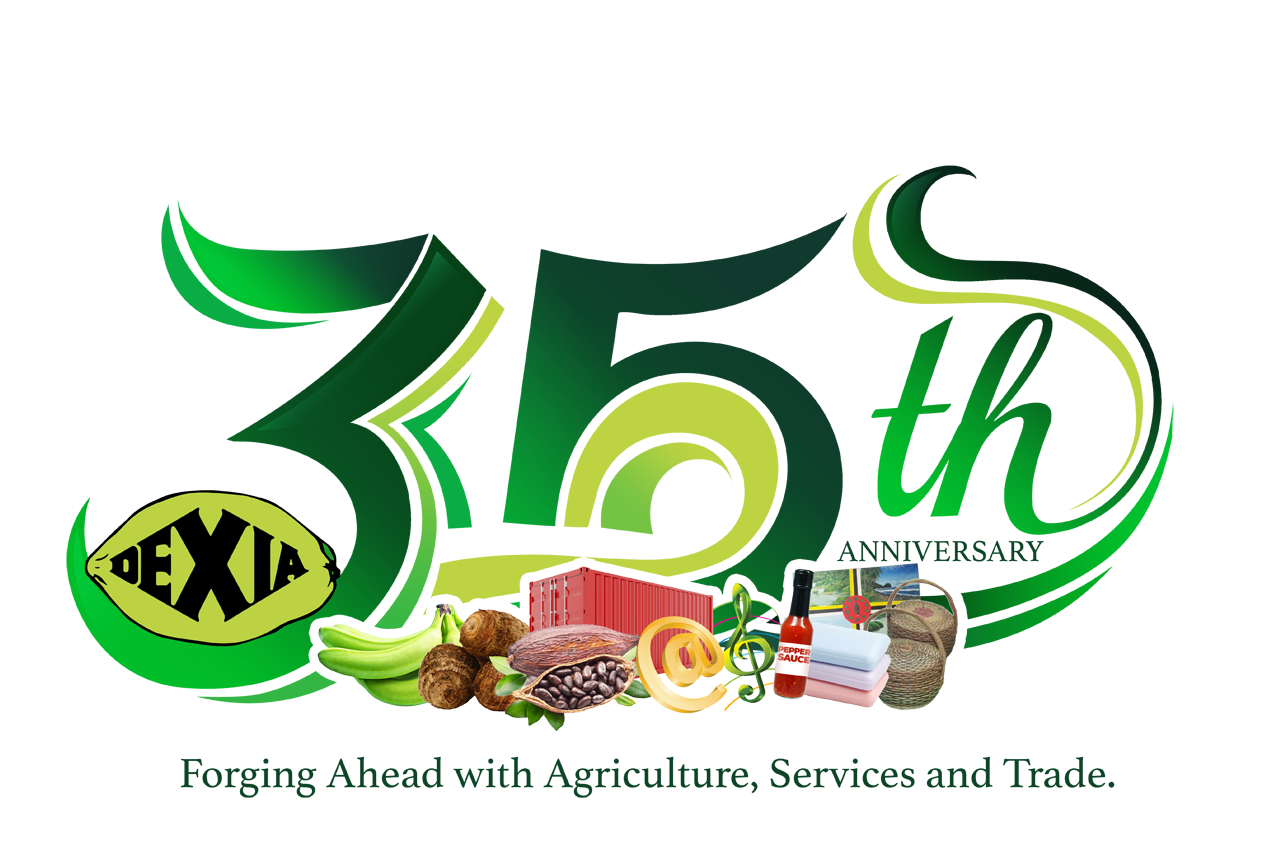 The Dominica Export Import Agency (DEXIA) is celebrating thirty five years of existence in Dominica on Thursday, July 1 2021, under the theme "Forging Ahead with Agriculture, Services and Trade".

DEXIA, which was established in 1986, was formed to lead the development of Dominica's export sector focusing on agriculture and agro-processing with cultural industries and professional services being recently added.

As part of its celebrations for its 35th anniversary, DEXIA is hosting a week of activities which commenced with a church service at the St. Alphonsus Catholic Church on Monday June 28 2021.

On Tuesday, a panel discussion on the topic "DEXIA's Relevance, Today and Tomorrow" was held at the Fort Young Hotel. On Wednesday 30 June 2021 representatives from All Saints University, Fresh Market Pharmacy, Jollys Pharmacy, Dominica Health and Wellness Association, Nurse Manuella Germaine and Sagicor will be engaging the public at the Roseau Market for a "Health and Wellness Day."

Customer Appreciation Day will be held at all DEXIA locations on Thursday July 1 2021. The Multi Purpose Pack Houses will host two training sessions in Roseau and Portsmouth on Thursday, focusing on Customer Service and targetting farmers, clients, hucksters, exporters and staff. The Agency will also make donations of food baskets to The Dominica Infirmary, Chances, Community Hostel Inc. (Grotto Home), House of Hope and Grange Home for the Aged throughout the week.

Minister for Trade, Commerce, Entrepreneurship, Innovation, Business and Export Development Hon. Ian Douglas stated that their theme is evidence of the resilience they have showed throughout their thirty five years of existence.

"Let me take this opportunity to offer congratulations to the Dominica Export Import Agency (DEXIA) for achieving this milestone of thirty five years of existence as an importer of basic commodities and exporter of fresh agricultural produce and the provider of necessary services to the agriculture, agro-processing and services sectors. DEXIA's chosen theme, ‘Forging Ahead with Agriculture, Services and Trade', speaks to the agency's resilient posture it has taken to continue to provide much needed services to all of the sectors it serves," Hon. Douglas stated.

Over the past three decades DEXIA has developed many major projects in collaboration with the Government of Dominica including the Business Gateway Project.

The agency developed the Business Gateway Project in 2008, as well as the National Export Strategy which was developed in collaboration with the International Trade Centre with its implementation funded by the Caribbean Development Bank (CDB).

"DEXIA has also moved to the creation of an Export Promotion and Development Department formerly known as the Market Support Services Department which has championed many developmental projects on a national level. Major projects such as the business gateway, a private sector development programme funded by the European Union under a special framework of assistance 2004 and the Government of Dominica. The programme brought much needed support to fifty one small medium sized enterprises in various subsectors such as manufacturing services and agri-business," Hon. Douglas noted.

The creation and implementation of the Multi-Purpose Pack Houses located in Portsmouth and Roseau was also the brainchild of DEXIA. The Minister for Trade explained that since their establishment in 2016, these pack houses have facilitated the export of over four million EC dollars in fresh agricultural produce to regional and international markets including the United States and the United Kingdom.

The passage of Hurricane Maria in 2017 destroyed majority of Dominica's cocoa stock. In response, DEXIA established the Cocoa Cluster Development Project in 2019 to regenerate the industry.

Minister Douglas noted that since its inception, the Cocoa Cluster Development Project has already achieved many of its objectives while working closely with the Ministry of Blue and Green Economy, Agriculture and National Food Security.

"DEXIA, as recently as 2019, following the devastation of Hurricane Maria introduced the Cocoa Cluster Dvelopment Project in collaboration with a number of key stakeholders including the Ministry of Blue and Green Economy, Agriculture and National Food Security to spearhead the development of fine and flavoured cocoa industry. This ongoing project has already realixed many of its objectives that seek to enhance Dominica's opportunities to benefit from this billion dollar global market. The project has received funding from Compete Caribbean Partnership Facility (CCPF) and DEXIA. To date a number of activities have been undertaken to include the development of a three-part documentary video series for cocoa stakeholders, a Financial Model with support from CREAD, Analysis of Cadmium levels in soil, leaf and bean samples, the development of Precision Maps that focus on Soil Fertility in Dominica and Wet and Dry Seasons, Accession of Genetic Material, Capacity Building for farmers just to name a few," Hon. Douglas added.

"DEXIA has come a long way these past three decades and during this week of celebrations we are focusing on where we have been, where we are and where we are going. Though it's a short period, we hope that it will encapsulate our journey thus far and that the public will engage with us during this celebration of our contributions to Dominica's economy," Mrs. Platsko noted.

We have 153 guests and no members online