GOVERNMENT AND MMCE SIGNS CONTRACT FOR CONSTRUCTION OF INTERNATIONAL AIRPORT 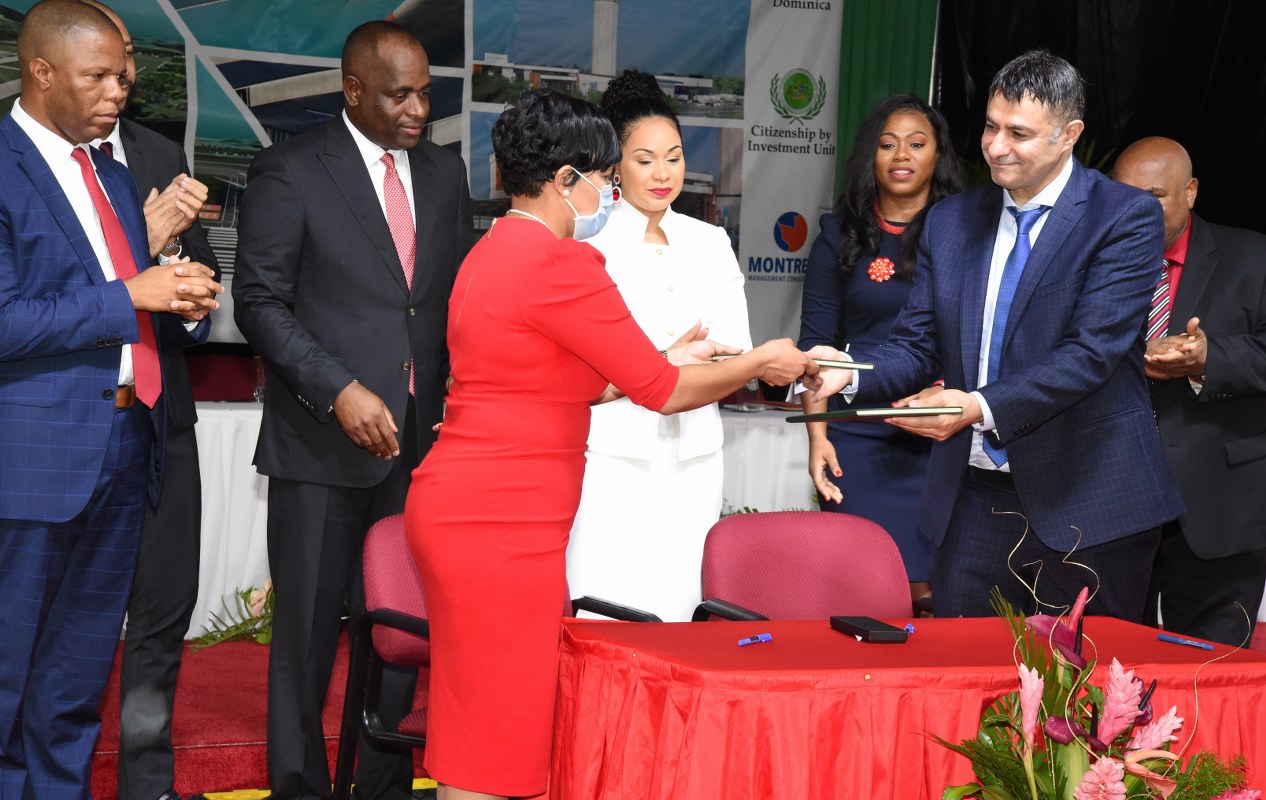 Citizens of Dominica from all around the island all gathered at the Windsor Park Sports Stadium to witness the historic signing of a contractual agreement between the Government of Dominica and Montreal management Consultants Establishment (MMCE) for the commencement of Dominica's international Airport.

The ceremony was held on Wednesday, June 6 2021 and was attended by Members of Cabinet, representatives of MMCE, other relevant stakeholders and members of the general public.

Speaking at the signing ceremony, Prime Minister of Dominica, Hon. Roosevelt Skerrit stated that his has been a dream of Dominicans for a long time.

“It is said that nothing happens before its time, well now is Dominica’s time. We have waited, we have been patient and we have planned and we are now on the cusp of making the dream of all Dominicans a reality. When we were dealt a devastating blow by Hurricane Maria in 2017 and we surveyed the damage and destruction all around us, who would have thought then hat less than four years later we would be witnessing the signing of an agreement to undertake the single largest infrastructure project that this country has ever witnessed,” Hon. Skerrit stated. 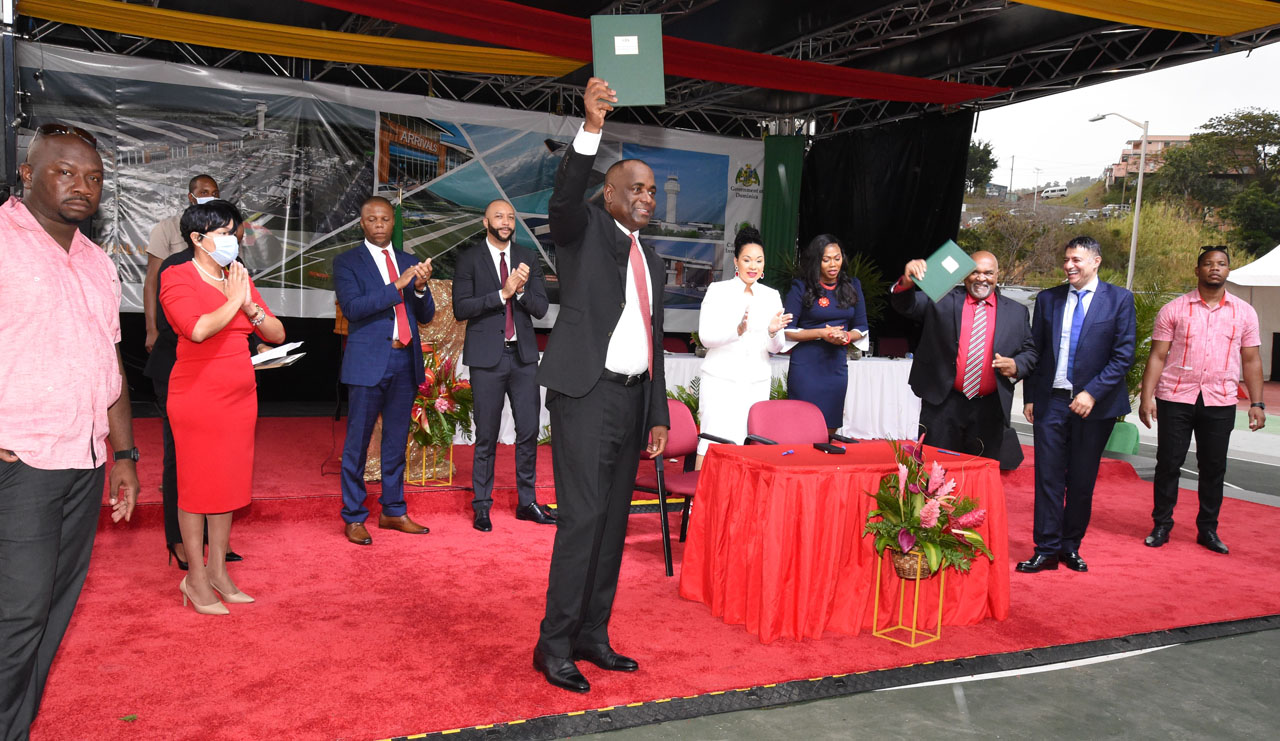 PM Skerrit noted that the contract signing is the first step in making the international airport a reality.

“Today the Government which I have had the honour to lead has delivered the first tangible and visible step towards making the international airport a reality in Dominica. Today, we see the evidence of its substance about to take shape in Dominica. After today, the airport will begin to rise out of the ground, then from the ground to the air, and I give you the solemn assurance that planes will land here direct from Europe and the United States of America in 2025,” he explained.

The Prime Minister described the occasion as ‘historic’ adding that it is a step closer to building a future filled with new opportunities for Dominica.

“This is a historic moment which will redefine the future of Dominica and its people. Today we take one step closer to fully claiming the new prosperity which will be ours. Today we create new opportunities for this country and its citizens. Today we help to secure the future our children, the children of Dominica, our children and our grandchild. Today we walk forward into the future, a future that for generations we have talked about, for generations we have dreamed about but which this generation and this Dominica Labour Party Government is now building for our people,” Hon. Skerrit added. 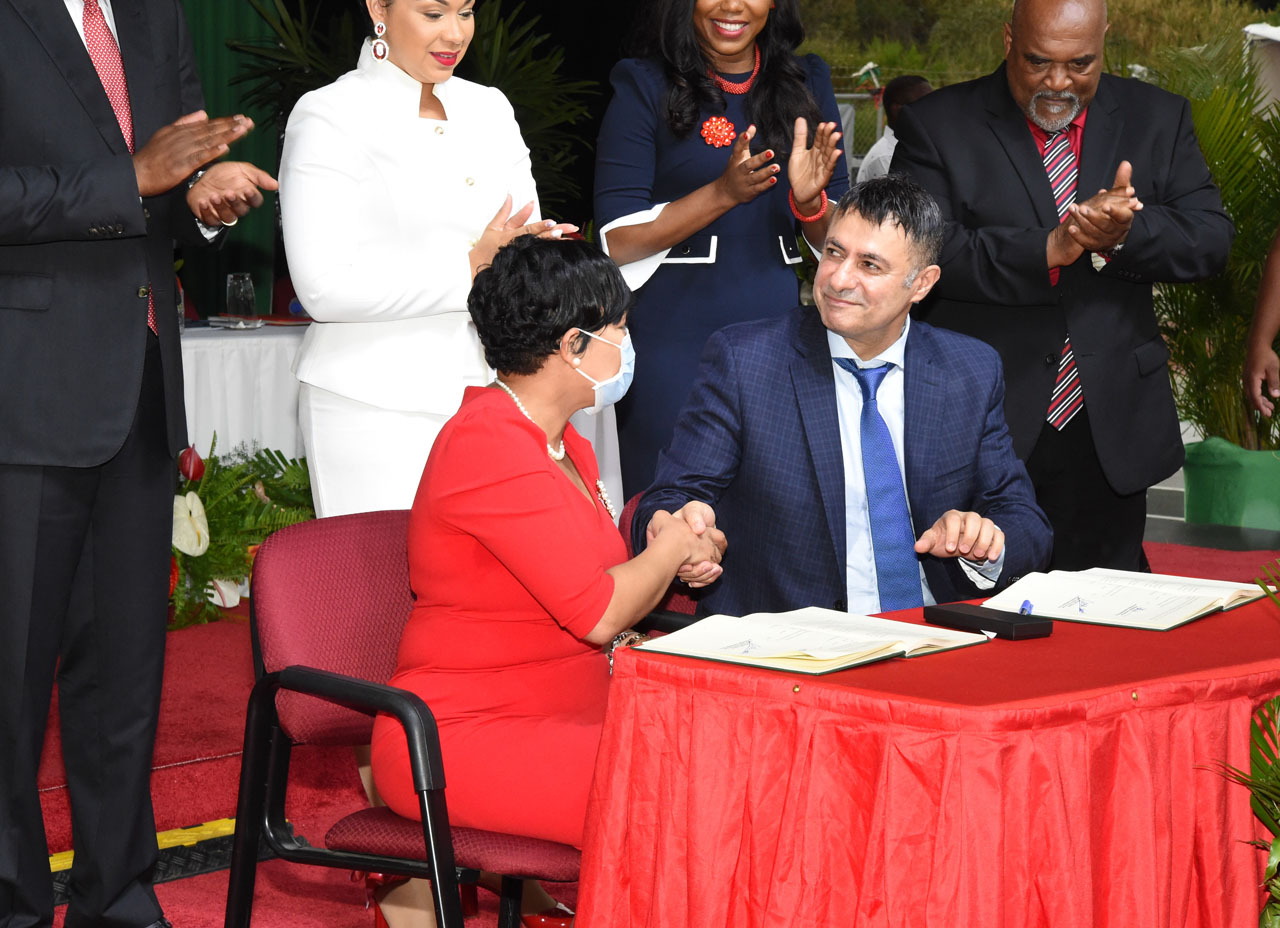 Senior Minister and Minister for Housing and Urban Development, Hon. Reginald Austrie noted that the airport which is being financed through the Citizenship by Investment Programme, will not be of any cost to Dominicans.

“As a Government we have vowed not to impose unnecessary financial burdens on the people of this country in our quest to construct an international airport and our Prime Minister has found a creative financial mechanism that will pare us the cost of high debt but will really be of no tax impact on the residences. This is what we promised and this is what we will deliver, an airport that will not increase the tax burden on the people of this country. Our dream of this airport is today drawing closer to its reality,” Hon. Austrie stated.

Minister for the Blue and Green Economy, Agriculture and National Food Security, and Parliamentary Representative for the Wesley Constituency, Hon. Fidel Grant explained that Dominica needs an international airport to properly compete with other Caribbean countries.

“An easier travel is just the foundation of benefits.  Easier access means that with the hurdle of complex travel lifted, more tourists will click the single button and visit the most amazing place on earth. Increased visitors means a lot for Dominica in many ways. Our spectacular accommodation providers will experience increased revenue, translating into more jobs, a greater demand for crops, fish, ancillary services and entertainment, extended exposure for our artists and craft persons increased sales for vendors, increased service demands for taxis tour guides, restaurants and spas,” Hon. Charles stated.

According to the CEO of Montreal Management Consultants Establishment Ltd.  Dr. Anthony Haiden, only the best construction practices will be used in the building of the airport.

“This international airport is the biggest contracted undertaking not only in the history of Dominica, but also in the history of the region. The most sophisticated methods developed in the construction industry will be applied and the result will be the best airport in the region, its successful completion and subsequent operation will have a transcending effect on the country and will literally reshape the future of Dominica.

President of the Dominica Association of Industry and Commerce, Mr. Stephen Lander went on to encourage citizens to support the project as the end result will benefit every citizens.

“As the industry transitions out of recovery following the global pandemic, the airport will serve as a foundational element under pining its future growth. This is a national project with inclusive opportunity. I encourage all Dominicans to give this effort your full support and more importantly tap into your inner entrepreneur. Imagine the possibilities, and position yourselves to take advantage of them,” Mr. Lander urged citizens.

Work has already begun on the international Airport at the proposed site of the village of Wesley. Government has already began the construction of homes for the relocation of Wesley residents to the Jo Burton site.

We have 160 guests and no members online