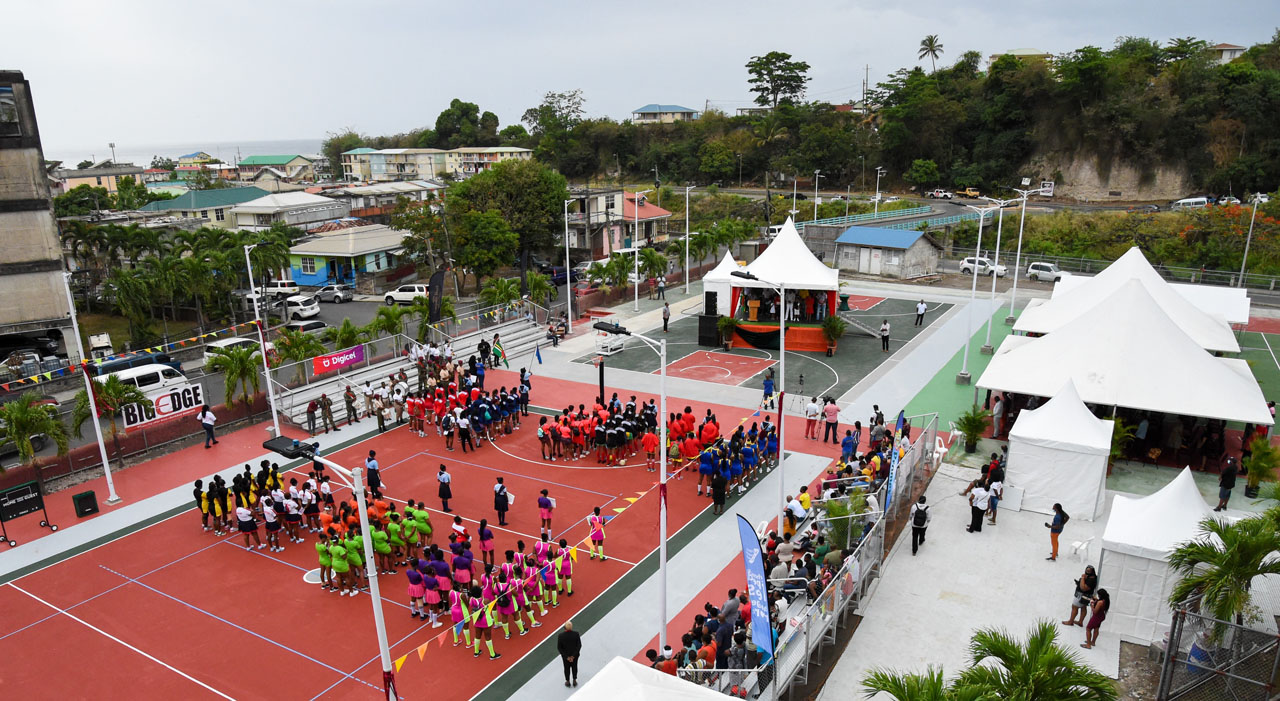 With an eye towards developing the sporting sector in Dominica as well as for the personal development of local athletes, The Government of Dominica commissioned the Windsor Park Sports Stadium hard courts at a ceremony on Sunday June 6 2021.

The courts were equipped with modern fixtures, portable bleachers and led lighting and will facilitate the playing of netball, tennis, volleyball and basketball.

Member of Parliament for the Roseau Central Constituency, Hon. Melissa Skerrit says the Government continues to invest in the sector despite the challenges posed by covid-19.

“Over the last few months, the constituency of Roseau Central partnering with the government of Dominica, and other stakeholders, has undertaken one of the most significant investments in Dominica since the building of the national stadium. Indeed this Government, in spite of all the challenges that face this nation especially during this pandemic period, continues to invest heavily in all aspects of sports. While we have been a beneficiary here in the city, it has indeed been a genuine broad based effort with genuine national impact,” the Member of Parliament stated.

The Roseau Central MP says these new courts will help boost sports participation not just in the city but around the country.

“The Government continues to show its commitment to the people especially the youth of this nation. Dominica can continue to hold its head high with the way it continues to come through in this particular difficult period for the entire world, and the construction of this courts at the stadiums fore ground will facilitate the development of tennis, volleyball, basketball and netball. Indeed we are confident that it well help ignite a sporting revolution not just within the city but throughout the whole country,” Hon. Skerrit noted.

Minister for Sports, Culture and Community development, Hon. Roselyn Paul says that she is proud that her Ministry was able to bring this project to fruition as sports plays an important role in building strong communities.

“We see our role as being integral in the development of Dominica. One of the key pillars towards the resilience of a dynamic Dominica is building strong communities. Since we are positioned to operate a central role in the mobilization of people particularly the youth, towards channeling their energies to national development. Sports have proven to play a key role in the building of strong communities.  Sports contributes towards the development of intergroup togetherness, social cohesion, community empowerment, building sustainability, building positive social capital, and addressing social issues such as our own health and wellbeing,” Hon. Paul stated.

The Sports Minister went on to say that the Government believes that to build sustainability, projects must be done in accordance of the needs of the citizens.

“The construction and commissioning of this facilities at this time is very critical. It is yet another example of the recognition of this Government, the Labour Party Administration, of the important role that sports can play in the development of our people. Construction of these courts are the result of the needs assessment among the youth of Roseau which revealed the need for recreational facilities within the Roseau Central area. And indeed the Pal Rep of Roseau wasted no time in charting the course forward to help make this happen. It is our belief that the development of infrastructure should align with the needs of the community in order to realize sustainability,” Hon. Paul explained.

Meanwhile, Prime Minister of Dominica, Hon. Roosevelt Skerrit says citizens hould appreciate these courts as they came at a time when the world is facing a global pandemic.

He then commended the Member of Parliament for her dedication to ensuring this project was completed.

“I want to commend and recognize the leadership, the determination, the perseverance and the clear vision that our Member of Parliament, Melissa Skerrit has declared for the city of Roseau. And I have always said that what Roseau needed was someone to represent them who restore the soul of the city of Roseau. And I believe that through Melissa Skerrit we are seeing the resurgence of our capital city,” the Prime Minister added.

We have 369 guests and no members online