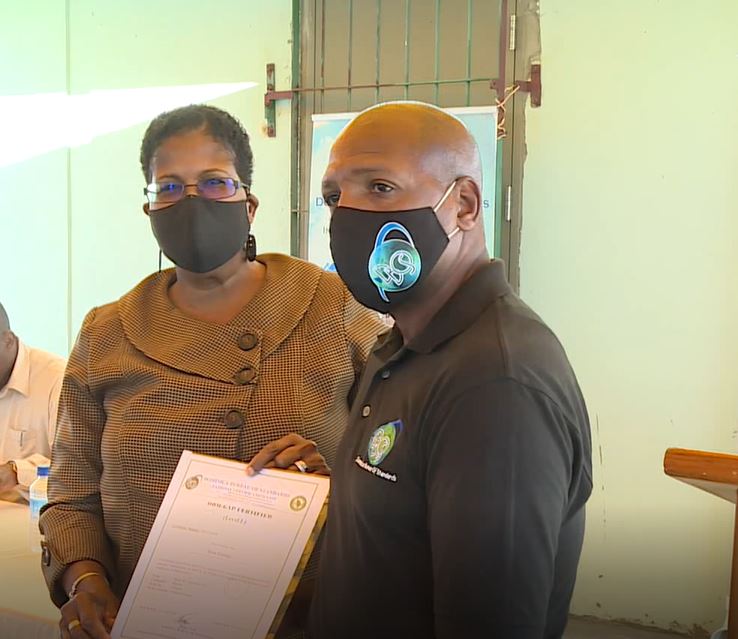 The Dominica Bureau of Standards continues to work with the Ministry of Blue and Green Economy, Agriculture and National Food Security and other stakeholders to ensure that agricultural practices on the island’s farms meet international standards.

This as a certificate awards ceremony was held on Wednesday 11 May, where ten farmers officially received their Dominica’s Good Agricultural Practices (DOM-GAP) Certification.

“Let me extend my congratulations to this first ten farmers on achieving the two highest levels of DOM-GAP Farm Certification. A number of other farms undertaking similar processes and will eventually be certified in the upcoming year. Therefore I call on all those undertaking this processes to not grow weary in doing so. Be mindful of the benefits that certification possesses,” Hon. Douglas stated.

“I wish to articulate the benefits of certification which are far reaching and trust that this will encourage other farmers with farms in Dominica to seek certification. Firstly, certified farms ensure that high quality fresh produce is available for local and export markets. Agro processors and exporters alike will now have available to them access to high quality fresh produce for manufacturing and for export to regional markets such as Barbados, St. Martin and Anguilla,” the Minister noted.

Minister Douglas says Government has spent one million dollars for the implementation of the fresh produce act.

“The Government through the Public Sector Investment Programme has so far disbursed one million dollars for the full implementation of the Fresh Produce Act and activities related to inspection and certification. It must also be noted that the Ministry of Blue and Green Economy, Agriculture and National Food Security has also contributed significantly from the very start of the implementation of the Act. And so the funds provided by the Government has facilitated the inspection and certification unit in providing the GAP training for staff and for you the farmers in the purchase of equipment, printing of documentation and the hiring of staff,” the Minister noted.

Minister Douglas says his Ministry remains committed to the development of Dominica’s farmers.

“Dominica doesn’t have oil, Dominica doesn’t have diamonds and gold. What we have is our soil, we have our fresh water, and we have some dynamic, energetic, forward thinking and hardworking farmers, who sacrifice every day, so we have to give them all of the support and encouragement that the Government can muster. So keep up the good work, know that we are with you, your hard work will be rewarding, continue to push and we will continue to give you all of the encouragement and all of the support that we can give you. Rest assured that you have my commitment and that of the Ministry and every single staff member associated with that Ministry,” Hon. Douglas added.

Meantime, Director of the Dominica Bureau of Standards Mr. Median Larocque says it is the intention to further expand the programme.

“DOM-GAP is presently crop base but however the scope will eventually be extended to accommodate livestock including poultry, pigs and small ruminants. The programme targets a number of commodities such as bananas, plantains, dasheens, hot peppers, gingers, and pineapples to name a few,” Mr. Larocque stated.

“DOM-GAP is a voluntary farm certification programme that targets all commercial farmers involved in primary production for the local and exports markets. There are three levels of DOM-GAP certification. Level 3, which is the lowest level, entails satisfactory record maintenance, relevant training certificates, and the chemical disposable pit in the pack shed. Level two involves everything in level 3 pus the farm infrastructure which is the pack shed. Level one includes everything in level 2 plus the relevant SOPS which are the Standard Operation Procedures,” the Director detailed.

We have 375 guests and no members online