DOMINICA RECEIVES CERTIFICATION IN ELIMINATION OF MOTHER TO CHILD TRANSMISSION 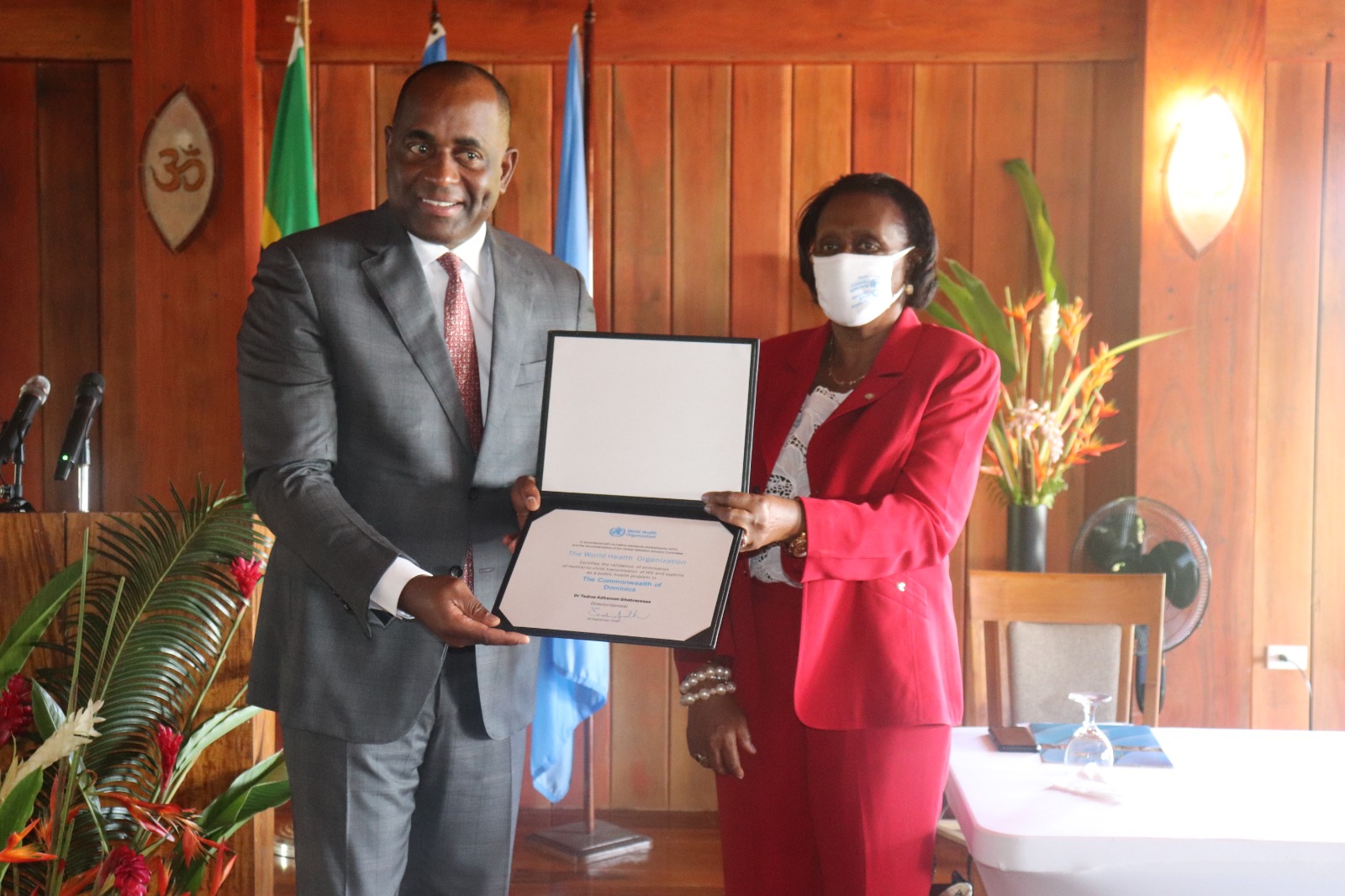 Dominica has become the fifth Caribbean territory to receive certification in the Elimination of Mother to Child Transmission (EMTCT) of HIV and Syphilis.

This milestone has been described as a step towards Dominica achieving its Sustainable Development Goals (SDGS).

Minister for Health, Wellness and New Health Investments, Honourable Dr. Irving McIntyre stated that the Caribbean is the only region that has been certified in EMTCT.

“The elimination of mother-to-child transmission initiative started in the Caribbean following the approval of member states in the Americas and became a global initiative. The Pan American Health Organization produced numerous documents and strategies to move the process in the region of the Americans and to date the Caribbean is the only region in the Americas that has been certified by the world organization in eliminating the mother-to-child transmission of HIV and Syphilis,” Dr. McIntyre stated.

He noted that Dominica endorsed the regional strategy and plan of action through resolution CD50-R12 in 2010, and strengthened its primary prevention and treatment services in for elimination of mother-to-child transmission as the Government is committed to improving the health care system and services to include the goal of EMTCT of HIV and Syphilis.

The Minister explained that Government through the Ministry of Health has taken action and implemented various initiatives to support the EMTCT.

“The first action taken in that process was the implementation of the elimination of mother-to-child transmission strategy in October of 2014. This included the development of a work plan and the ongoing monitoring of national data such as prenatal and antenatal screening of HIV and syphilis, laboratory data, hospital and clinic records, maternal registers and implementation of electronic SIP. In additional clinical guidelines to include antenatal registers, maternal and child health strategies and adolescent health strategy were updated. Capacity building was implemented among health care workers to support the primary prevention and treatment services for all pregnant mothers and infants without compromising the quality of care provided,” the Health Minister noted.

Meanwhile, Prime Minister of Dominica, Honourable Roosevelt Skerrit expressed thanks to the Pan American Health Organization for their assistance in reaching this milestone.

“I receive this certificate with immense appreciation and pride. Appreciation to all the persons that in some way contributed to us reaching the important milestone. We particularly recognized the Pan American Health Organization for its invaluable technical support and guidance working beside us for the past seven years since we engaged in this initiative. Dr. Etienne please receive our gratefulness for this and the overall technical collaboration of PAHO with the people of the Commonwealth of Dominica. Appreciation to all the regional partners that have steadfastly supported and accompanied the process and in this regard I would like to thank UNICEF for co-chairing the EMTCT secretariat with PAHO, UNAIDS, other UN partners and PANCAP for their continued advocacy and support which has contributed to this laudable achievement,” the Prime Minister stated.

According to the Prime Minister, Dominica has been able to maintain ninety-five percent or more coverage of antenatal care and skilled attendance at birth, adding that the island has also achieved ninety-five percent or more coverage of HIV and syphilis screening of pregnant women, with zero incidence of parental HIV per 1,000 lives of genital syphilis.

“As a result there has been no recorded cases of mother to child transmission of HIV and syphilis in the Commonwealth of Dominica over the past four years. Achievements of the dual elimination targets has additional positive implications as it contributes for Dominica to reach other sustainable developing goals,” PM Skerrit further stated.

We have 382 guests and no members online