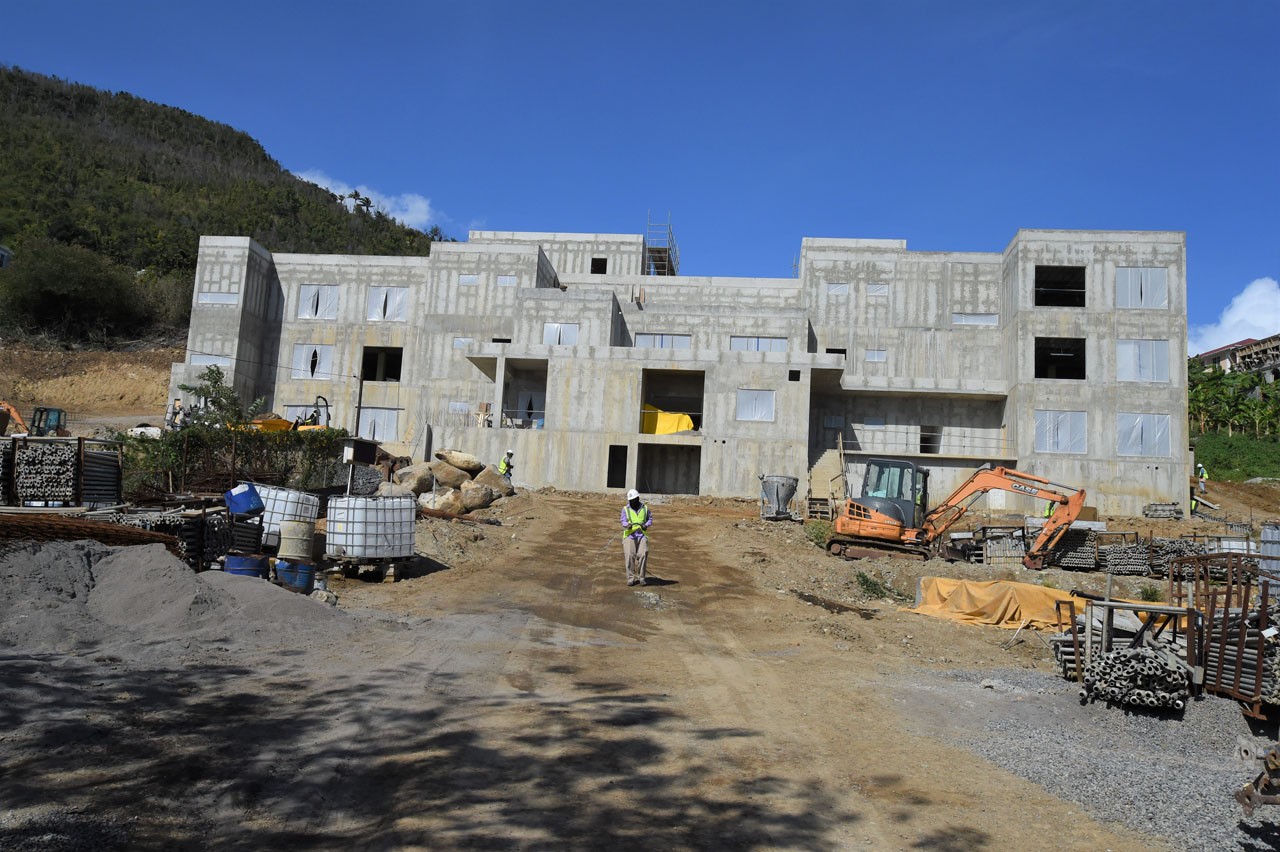 Prime Minister Hon. Roosevelt Skerrit led a cabinet delegation through the construction site of an 18 million dollar Regional Emergency Shelter located in Jimmit on Tuesday, May 4 2021, as Government continues its mandate to build the world’s first climate resilient nation.

An agreement was signed between the Government of Dominica and the National Authorizing Office (NAO) on behalf of the European Union Development Fund at 32 million dollars for the construction of two regional hurricane shelters in Jimmit and Castle Bruce.

“We decided as a country that to enhance our preparedness and also our ability to respond to natural disasters, we needed to build regional emergency shelters in some strategic locations across the country.  We may not be able to have one in every community but we will have centralized facilities to prove that much needed shelter in anticipation and preparation of a natural disaster,” PM Skerrit stated.

PM Skerrit expressed his satisfaction with the pace and quality of the work done on the ongoing project, noting that the project might be handed over ahead of schedule.

Government, after Hurricane Maria in 2017, declared that Dominica would become the first climate resilient nation in the world. The construction of these regional shelters across the island remains a priority to make this mandate a reality.

“With the completion of this project, then it will be another step in our efforts to place our country in a better position to withstand natural disasters and also to respond to natural disasters. Because ultimately when a storm is approaching, the first order of business as a Government is to ensure the security, as far as practically possible, the security and safety of our citizens,” PM Skerrit added

Prime Minister Skerrit then thanked the European Union for their support as Government realizes the effects of climate change.

Minister with responsibility for National Security and Parliamentary Representative for the Mahaut Constituency, Hon. Rayburn Blackmoore is contented with the construction of this facility.

“This facility in my view is yet another statement of intent by the Labour Party Administration, a facility that stands as an exhibit as proof to the commitment of this Labour Party Government to get Dominica to becoming the first climate resilient country in the world,” Hon. Blackmoore noted.

A contract with NH was signed on June 17 2020 for the construction of this project.

Portsmouth, Roseau, Grand Bay and Marigot have also been identified as potential sites for the construction of more regional emergency shelters.

We have 141 guests and no members online