GOVERNMENT CONTINUES TO INVEST IN SPORTS 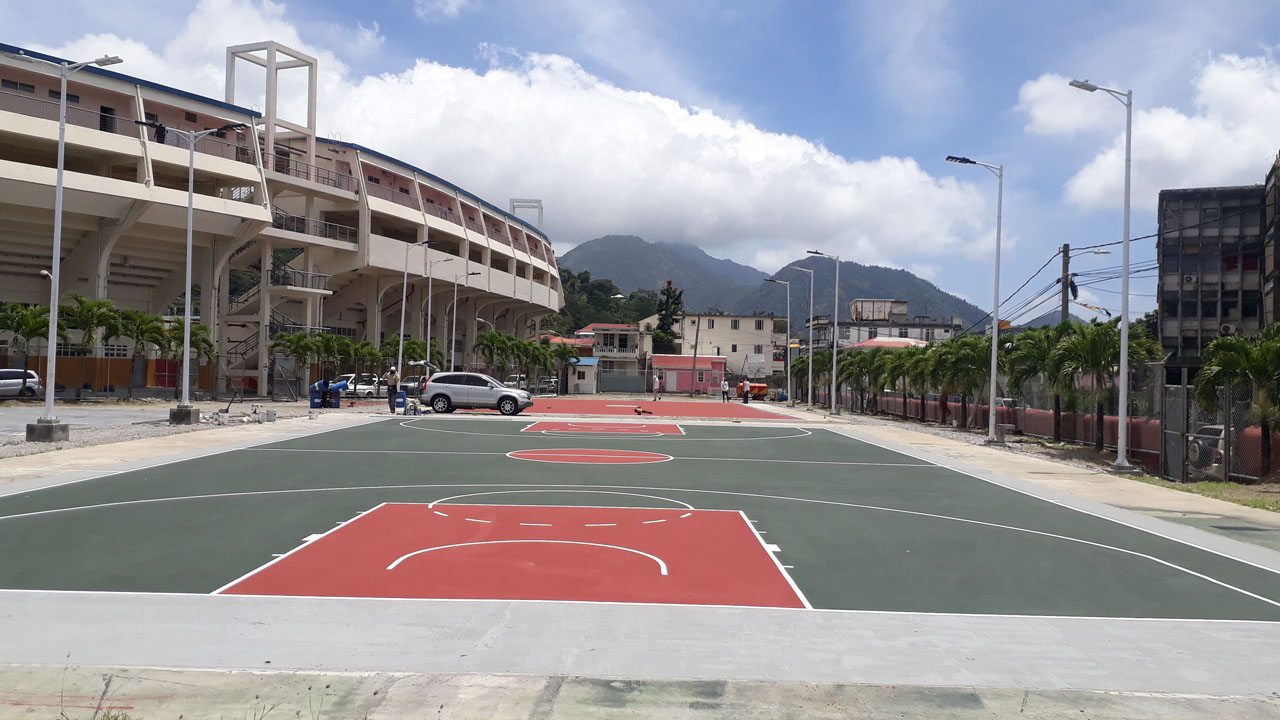 With the development of Dominica’s human resource a long time priority of the Government of Dominica, many investments are being made in the country’s sporting sector.

Community hard courts and playing fields are being rehabilitated and reconstructed around the island.

Work is also ongoing on the Windsor Park Sport Stadium in Roseau at a cost of over 2 million dollars.

“The Windsor Park Sports Stadium Infrastructure and Lighting project is ongoing and it will cost the Government of Dominica an investment of 2,306,357 dollars. Right now we are procuring the lights and the roof has already been prepared. We are working on the outfield and work has progressed very well so far. We have installed internet. We are also working on the installation of the electronic scoreboard. The scoreboard is here but we are working on the frame for its installation. This was actually damaged so we have to undertake work on the concrete base and also a steel fare. So soon from now we will have the electronic scoreboard installed,” stated Minister for Sports, Culture and Community Development, Hon. Roselyn Paul.

The marking and surfacing of the hard courts at the stadium have also begun.

“We have three hard courts; one will serve as a basketball court, one for volleyball and netball and the other for lawn tennis. Works are progressing there very well. They have marked on of the courts and they have started marking a second court,” the Sports Minister explained.

Hon. Paul also gave an update on the sports complex to be built in Stockfarm. She stated that the developers are currently reviewing tendering submissions.

The Massacre multi-purpose court is also nearing completion. The Sports Minister stated all the necessary equipment is on island and awaiting installation.

“The Massacre Basketball Court, all of us who pass very frequently in the area will see that we are nearing completion of the court. We are investing over 2 million dollars in this project. All the equipment is there for installation so we expect within the next few weeks to have this project. Washrooms and change rooms are being constructed right now and subsequent to that the floor surface will be installed. It’s already here and will be done shortly,” she further noted.

A contract for rehabilitation work on the Geneva Playing field was signed and work has commenced and is progressing smoothly.

“The rehabilitation of the Geneva Playing Field is ongoing. It is at a cost of half a million dollars. We had a contribution from The Dominica Football Association, that we appreciate very much, of 150,000 dollars and Government is continuing. Government has signed a contract for over 400,000 dollars and even as we speak work is ongoing at the Geneva Playing Field,” the Minister stated.

She also revealed that the Public Works and Technical Services Department is reviewing the scope of works for the rehabilitation of the Colihaut Playing Field so that works can continue on this project.

Hon. Paul went on to say that the Government has been investing in a number of facilities around the island and collaborating with the Parliamentary Representatives of various communities.

“The Government is ensuring that youth around the island have a facility where they can go and play to ensure that we remain healthy and well. When we speak of sports development we also speak youth development so there are a number of hard courts that have been upgraded or built around the island including  the Paix Bouche Hard Court, the Savanne Paille Hard Court, the Wesley hard court, we have Bense being upgraded, Pichelin. So youth around the island have access to these important sporting facilities so that they continue to grow and develop in this area,” Hon. Paul added.