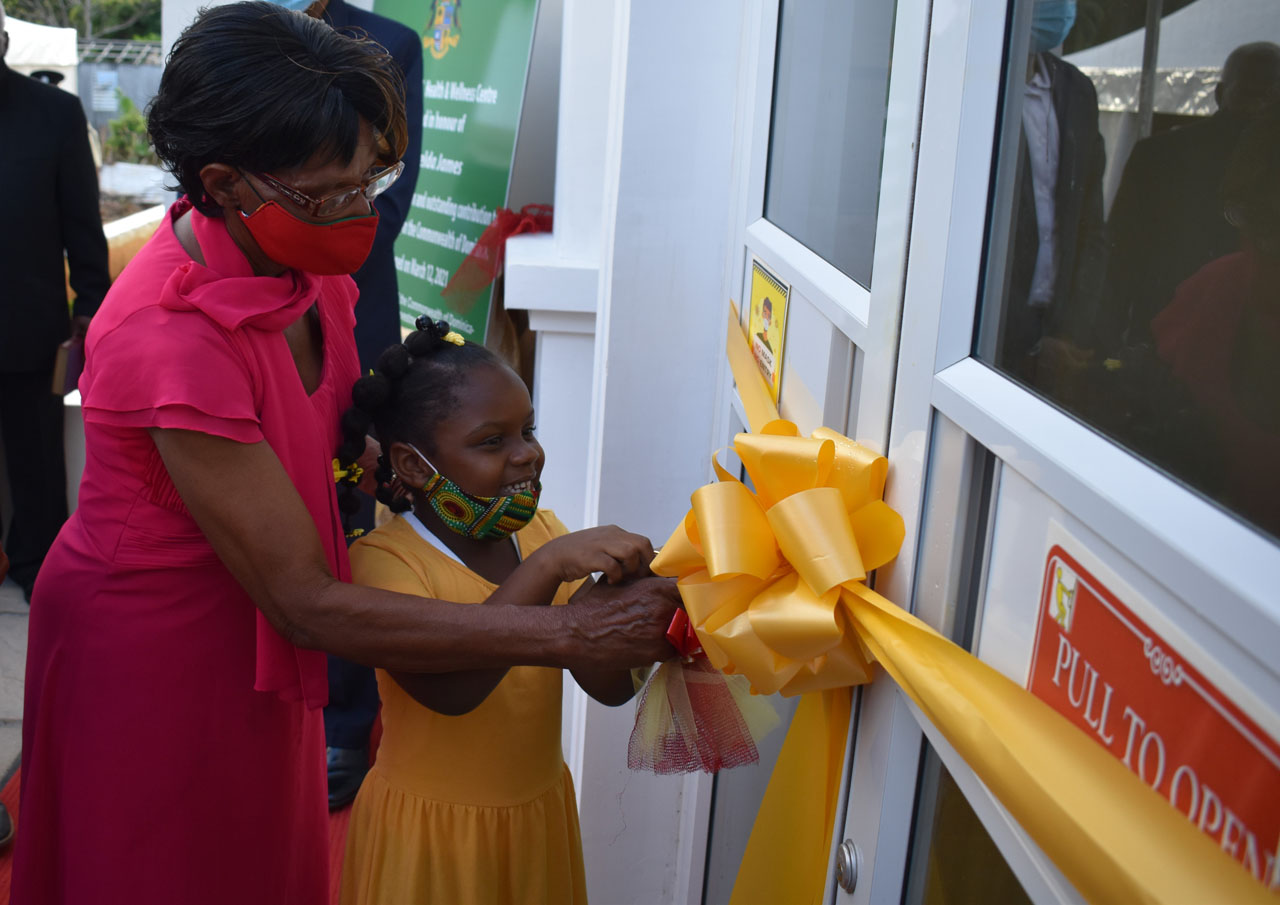 Wesley has become the latest community in Dominica to boast of improved infrastructure in the delivery of primary healthcare services. This as the new Emelda James Health and Wellness Centre was commissioned on Friday, March 12, 2021.

The facility is one of twelve new health and wellness centres currently being constructed by the Government, in partnership with the Montreal Management Consultants Establishment (MMCE), around the island and funded by the Citizenship by Investment Programme.

As part of the thrust towards building climate resilience in every sector, the new facility is equipped with reinforced concrete structure and impact resistant windows.

Nurse Emelda James affectionately known as “Ma Spark” began her formal training in nursing in 1970 and qualified as a Registered Nurse in 1973 and a midwife in 1975. She was then assigned to the Marigot Health District and was known for her caring and empathetic nature. Nurse James was an early advocate for the development of Primary Health Care in Dominica.

During her tenure as Registered Nurse and Midwife at the then Wesley Health Centre in the early 1980s, Nurse James worked with zeal in organizing special clinics to highlight non-communicable diseases especially diabetes and hypertension. Her compassion, moral courage, vision and hard work sets her apart from all else and made her a role model too many nurses.

“In the mid-1980s, Nurse James was assigned to the Wesley Health Centre, where she served the community of Wesley. Her passion for patients’ health was evident in the quality of care which she gave to her patients. Her love for the people, especially the elderly and the children, coupled with her selfless commitment was her passion that propelled her into this profession and became the driving force that kept her for over thirty years, as she gave her best to the community,” Principal Nursing Officer, Terrilia Ravaliere stated.

Prime Minister of Dominica, Honourable Roosevelt Skerrit noted that he is happy that Government could honour Nurse James for her years of service to Dominica.

“I believe we should have named this facility in both her and her husband’s honour. Ma Sparky has made a tremendous contribution to Dominica’s development and I think I may invoke my constitutional right to rename this facility after both of them because the reality is I have never seen Sparky without Ma Sparky and I’ve never seen Ma Sparky without Mr. Sparky. They have made such a great contribution not only to this wonderful part of Dominica but to the whole of Dominica and I am happy that this Government is recognizing these individuals for their contributions in a tangible way,” Prime Minister Skerrit stated.

The Prime Minister explained that the new facilities are evidence of Government’s commitment to developing primary health care in Dominica as the country moves towards developing a robust community health care network.

“The opening of the Wesley Health Wellness Medical Centre is one of twelve such facilities that this Government will commission in the first quarter of this year, and this once again emphasizes our ongoing commitment to the delivery of excellent primary health care. The Dominica Labour Party Government has always believed, from the very onset, that health care and education are the foundation of any developing society and the bedrock of our efforts at empowering our people. This is why we have conscientiously embarked on developing the most comprehensive community health care network per capital that can be found anywhere in the Caribbean and beyond,” Prime Minister Skerrit went on to state.

The Prime Minister added that moving forward, greater emphasis will be placed on the wellness factor in the health system.

“You may have noticed that we are also placing emphasis on the issues of wellness, because we believe that ultimately, our successes will be judged not only by how we care for our people when they are sick, but what we as a community do in helping to keep people from getting sick. We recognize that adequate emphasis had not been placed on the concept of wellness in our health management systems and so moving forward there will be special emphasis in that area,” Prime Minister Skerrit further added.

“Nurse, we honour you, we celebrate you and we are indeed grateful for the service you have given to all of us in the community and the North east District where you served,” Honourable Grant stated.

He then expressed his thanks to the Government of Dominica, on behalf of his constituents, stating that he is grateful for the new health and wellness centre.

The Parliamentary Representative further added that the new facility was testament to the Government making good on its promises and commitment to the people of Wesley and by extension the people of Dominica.

“The new modern health and wellness centre is just the beginning of things to come for you,” Honourable Grant said.

Minister for Health, Wellness and New Health Investment, Honourable Dr. Irving McIntyre noted that citizens should be proud of these new facilities.

“You the people, the beneficiaries must play your part as well. You must attend your clinics, you must take the advice of the health care workers, and very importantly you must own your health and wellness centre. It belongs to you. Take care of it; don’t litter it and don’t deface it. It is also important to know that with the completion of our twelve new health and wellness centres, we have the most of these facilities per population in the entire region. As a nation, we should be proud,” Dr. McIntyre noted.
Dr. McIntyre then called on the people of Wesley to take ownership of the new facility.