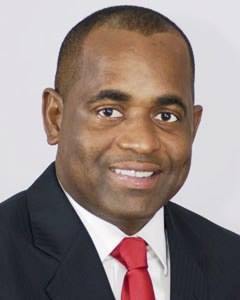 Roosevelt Skerrit (born 8 June 1972) is a Dominican politician who has been Prime Minister of Dominica since 2004; he has also been the Member of Parliament for the Vieille Case constituency since 2000. Regionally, he has served as the Chairman of the Organisation of Eastern Caribbean States (OECS) and most recently as Chairman of the Caribbean Community (CARICOM) in 2010.

Member of Parliament for Vieille Case

Skerrit was elected to the House of Assembly (legislature) as Member of Parliament for Vieille Case in 2000 before being appointed Minister for Youth Affairs and Sports by Prime Minister Rosie Douglas. He was Minister for Education.

Skerrit was first sworn into office on January 8, 2004 after the untimely passing of his predecessor. Aged 31 at his swearing in, he became the world's youngest Prime Minister, leading a two-party coalition government. The following month, February, Skerrit was elected Political Leader of the Dominica Labour Party.

In the May 2005 General Election, Skerrit successfully lead his Party to win an outright majority in the legislature, a feat last achieved by the DLP in 1975. In addition to being Prime Minister, Skerrit served as Minister of during that term.

In the December 18, 2009 General Election, Skerrit lead his Dominica Labour Party to win a second consecutive outright majority in the legislature, strengthening his Party's share to 18 of 21 possible seats. On the December 21, 2009, Skerrit was appointed by President of Dominica, His Excellency Nicholas J. O. Liverpool, to be the Prime Minister of Dominica marking his the beginning of his own second term in Office. On January 4, 2010, Prime Minister Skerrit was appointed by the President, to be Minister for Information Technology, Finance, and Foreign Affairs.

Skerrit has earned an international reputation for his national and regional leadership along with his hands-on and sincere approach to international affairs. He is now a frequent lecturer at all levels. Lectures include The David Thompson Memorial Lecture: Future of CARICOM and Regional Integration at the University of the West Indies, Cave Hill, Barbados in 2011. More recently, he was Keynote speaker at the 2013 Annual Meeting of Eco-Forum Global in the People's Republic of China.

Skerrit, as Prime Minister, has graduated to the forefront of Caribbean leadership, serving as Chair of the Caribbean Community (CARICOM) and the Organization of Eastern Caribbean States (OECS) during periods of historic fiscal and economic challenges faced by the region and the world: high debt, high unemployment, low growth, and high deficits. He has contributed to the formulation of the eight-point stabilization programme of the OECS. As leader of the first English-speaking and Caribbean Community (CARICOM) country to join the Bolivarian Alliance for the Peoples of our Americas (ALBA), in 2008, Skerrit is recognized for making a significant contribution towards building bridges between the predominantly English-speaking Caribbean region and the predominantly Spanish-speaking Latin American region. He is an ardent advocate of wider regional cooperation and has worked towards the deepening of cooperation with the Community of Latin American and Caribbean States (CLAS).

Skerrit is married to Melissa Skerrit; the couple recently celebrated the birth of their first child, Dmitry together. Skerrit previously had a son, Malik. He was raised as a Christian and possesses a strong sense of family and community Service. He has developed personal discipline and a passion for getting things done. Skerrit has empowered Dominican citizens and residents by involving them as partners in governance and development, especially the Youth through education and the poor, women, and the elderly through innovative social programmes in housing and settlement.

Source: Office of the Prime Minister of Dominica