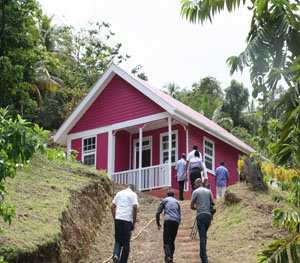 The Labour Party Administration’s 10 year old Housing Revolution Programme is having the same impact on the lives of Dominicans as it did at its start.

On Wednesday March 25th, a delegation led by the Hon. Acting Prime Minister, Reginald Austrie visited a housing project in Sineku along with officials from the Government of the People’s Republic of China.

There, the final house in this housing project in the Kalinago Territory has been completed. This means another family in the constituency will receive keys to a new home.

For the Hon. Parliamentary Representative for that Constituency, Casius Darroux this is a great gift to his constituents.

“It is a great initiative from the Government of Dominica. One of our major problems in the Kalinago Territory, Atkinson and Antrizzle is housing. As we continue with the revolution in housing we are hoping to improve the housing standard,” he said.

Government’s Housing Revolution has invested millions of dollars in safe and affordable housing for Dominicans, touching the lives of thousands of nationals including residents of the Kalinago Territory. 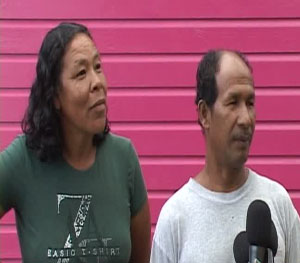 Last September, 27 houses were given to Dominica’s indigenous people: a US $1.4m gift from the People’s Republic of China and the Labour Party Government.

This structure built in Sineku is house number 28.

The structure has cost Government almost $100,000.

“We really appreciate this effort because it took the Dominica Labour Party to come, look at the indigenous people and say it is time that they get a fair share of what the Government has to offer the people.

“The Kalinago people have accepted it wholeheartedly and are very thankful to the Government and the Dominica Labour Party.”

Artisan, husband and father, Matthew Frederick is thankful for the much anticipated assistance from government.

He is especially thankful to Ashton Graneau, the previous Parliamentary Representative who initiated the process.

“We were living in a small house and then I got sick so I could not work to build a better one. When Mr Ashton Graneau came, we still had that issue and he brought it to [Government,” Frederick began. “I am very happy and grateful for it. I want to thank Government especially Mr Graneau for coming through.”

Frederick’s wife, Pam Frederick recalled their previous situation and had her own special thanks for the Government of Dominica.

Pam says, “We did not have toilet or bathroom. To tell you the truth, I am thankful. Thank God for this gift; I always say at church that that is a blessing from God. I thank God for the Prime Minister of Dominica and the Chinese Government for blessing us with this house. I feel proud…”

This is just one example of Government responding to the housing needs of Dominica’s indigenous people.

The Hon. Roosevelt Skerrit-led administration has made clear its mission to ensure proper living conditions for all Dominicans.

Thanks to the DLP Administation’s Housing Revolution Programme, hundreds of citizens who otherwise would not have been able to afford their own homes, are now properly sheltered.

Dominica’s Government and the People’s Republic of China established diplomatic relations in March 2004.

We have 116 guests and no members online