Address to be delivered by

His Excellency Charles A. Savarin, DAH

President of the Commonwealth of Dominica

on the occasion of the declaration

One week ago today, that is on Thursday, 27th August 2015, we were awakened early in the morning to torrential rains, deafening claps of thunder and sizzling lightning. The sight which greeted us on looking outside was frightening. Tropical Storm Erika was literally sitting on top of us.

When most of us retired to bed on the night of Wednesday, August 26, we were relieved that Dominica was neither under a storm watch nor a storm warning and that from all the weather reports, Tropical Storm Erika was veering well  north of Dominica.  We expected some rain, perhaps even some heavy showers, but nothing like what we actually experienced.

The country endured the tumultuous and persistent rainfall for several hours and by daybreak, after a restless night with very little  sleep, the nation was suddenly awakened with a strong sense that what we  had been  experiencing  over the past five or so  hours, was an unusual event.

By that time, electricity, water and telecommunication services were not available throughout most of the country. Concern and near panic began to set in when people realised that it was impossible to make contact with friends and relatives living in hazardous areas and in low lying communities, which made them highly vulnerable to the harmful effects of flash flooding.

Fortunately, the local radio stations were operational and transmitting. As the morning progressed and people anxiously tuned in to their  radio stations, the overwhelming  magnitude of the disaster that visited the nation, like a thief in the night, robbing it of both life and property, began to unfold.

The images emerging on Facebook pages told a horrendous and gruesome story of apocalyptic dimension. Communities in the North West and South East had been  levelled to the ground and other areas were  under siege by rising  water and mud as the raging rivers swept away bridges, roads, homes and anything that stood in the way of their destructive path.

We heard and gazed in amazement and disbelief as the mountainous and scenic village of Petite Savanne was virtually razed to the ground with harrowing accounts of loss of life and many more  missing. There were also reports of loss of life in Bath Estate, Good Hope, Castle Bruce and Delices.

There were scenes of devastation in Good Hope, Delices, Lower Canefield, Pichelin, Dubique, Bath Estate, Colihaut, Coulisbistrie, Macoucherie and along the banks of the Roseau river. I have chosen to highlight these areas, but the truth is no area in Dominica remained unscathed from the effects of the rains of Tropical Storm Erika.  Additionally, Douglas Charles Airport which was recently renovated, suffered serious flooding and commercial flights in and out of that airport have been suspended.

On Monday, 31st August, I met with representatives of the Scouts Association and later that day with representatives of the Roseau City Council, the Dominica Association of Industry and Commerce (DAIC) and the Dominica Hotel and Tourism Association (DHTA) to discuss how they could collaborate with each other in the massive clean up operation, particularly in the commercial and administrative heart of the Capital City of Roseau.

On Tuesday, 1st September, I had the opportunity along with the French Ambassador to Dominica, the President of the Regional Council of Martinique and the our Minister for Foreign Affairs, to do a  helicopter flyover of the affected areas and I was astonished by the magnitude of the destruction that was evident. My wife and I also visited those on the Alford Ward of the Princess Margaret Hospital (PMH) who sustained severe injuries; and also persons from Petite Savanne and Paradise Valley, Bath Estate, who were displaced by Erika and are housed at the Dominica Grammar School and Roseau the Primary School, respectively.

Those of my generation have gone through many natural disasters, including hurricane David in 1979.This hurricane which lingered over the island with winds that gusted up to 150 miles per hour, caused widespread damage and loss of life. No one expected that a tropical storm with winds of less than 50 miles per hour would have unleashed such a downpour to cause death and destruction on a scale comparable to and in some locations, worse than that caused by Hurricane David.

Fellow Dominicans, my wife Clara and I feel the pain and the grief of all the families who have lost loved ones in this catastrophy; we convey deepest condolences to them all and pray God’s strength to carry them through during this trying period of deep loss. With time, our unwavering support one for the other, and abiding faith in God, those most seriously affected will be able to rebuild their lives and be a stronger people for having gone through this terrible experience.

There are so many of our  sons and daughters, brothers and sisters mothers and fathers, who have seen their life’s work shattered and brought to rubble before their very eyes and now  face a future of uncertainty.  But all is not lost. That great Dominican spirit of coming together in times of adversity and helping each other to carry his load, has once again come alive in all our communities. It is that spirit that caused us to rise from the ruins of Hurricane David, and that same spirit will cause us to rise from the rubble of Tropical Storm Erika.

I commend  the humility and magnanimity of spirit demonstrated by the Honourable Prime Minister who was quick to realise that the rebuilding and restoration of Dominica required a united effort on all fronts, and invited the Parliamentary opposition to join the Cabinet Advisory Committee to chart the way forward for the country.

It was equally magnanimous of the Leader of the Opposition to accept that invitation. I now call on all supporters of the government as well as supporters of the opposition, whether at home or abroad, to set aside their differences and join hands with one another in this national effort of recovery.   It is my hope and prayer that this Erika inspired bipartisan and unified approach in treating with the rebuilding of Dominica will bear fruit and will be sustained, sending the signal to all that we can be a stronger and more successful nation when we act in unison in all spheres of life. 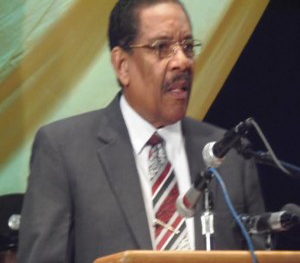 I want at this time, to congratulate all citizens for the mature, responsible and law-abiding manner in which they have conducted themselves during this period of crisis. In many countries including the highly developed democracies, events such as these have forced the authorities to suspend some civil liberties in order to maintain law and order, as some citizens engage in unscrupulous acts against private and state property, further aggravating an already difficult situation.

Our citizens have confronted this crisis with calm, patience and maturity. Therefore it has not been necessary to suspend any of the basic rights and freedoms we enjoy under the Constitution.

The response and recovery effort was triggered smoothly with timeliness and precision. The Office of Disaster Management (ODM) responded with practiced alacrity to the task and has been providing yeoman service to the people and professional advice to the political directorate. They are deserving of our high commendation.

I am informed that the Emergency Operations Centre has  been diligent in coordinating the national response and the various National Emergency Planning Organisation (NEPO) sub committees have undertaken their responsibilities with seriousness and determination. That is reassuring and comforting.

The nation owes a debt of gratitude to our police and fire service personnel who are our first responders, and to the many volunteer agencies that have quickly responded to this national disaster.

The overwhelming response of regional governments and the international community to our plight is heart warming. Their positive responses at this, our time of need, has assured us that we will not walk the road of national recovery alone for they will be at our side.  The public utility companies deserve a special commendation, as even before the rains had stopped, they began the work of restoring services.

Fellow citizens, our Government has declared today and tomorrow as National Days of Mourning for the lives lost as a result of the tragedy, and Saturday and Sunday have been declared National Days of Prayer and Thanksgiving.

While our nation mourns, all our able- bodied men and women have the solemn responsibility to rise up from the ruin and the shattered lives that surround them and face the task of rebuilding with a renewed passion and determination.

With God on our side, we will overcome and we will rebuild Dominica stronger and better.

We have 182 guests and no members online