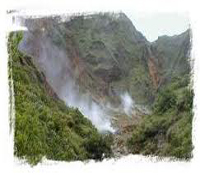 Volcanologist attached to the UWI Seismic Research Centre, St. Augustine, Trinidad and Tobago Patricia Joseph has confirmed that there has been no recent volcanic activity on the island.

Patricia was one of a team of scientists in Dominica this week conducting a geothermal chemical monitoring exercise in strategic locations on the island including the Valley of Desolation and the Boiling Lake.

Dominica is one of the volcanically active islands of the Lesser Antilles arc with nine active volcanoes.

The visit which involved collecting water samples from volcanic regions on the island was carried out to ensure that nothing abnormal is happening.

Joseph in an interview with the Government Information Service (GIS) on Friday April 12th said her findings did not reveal anything abnormal.

“I didn’t see anything unusual except for the fact that there have been a lot of changes in the Valley of Desolation itself. What I have observed from my last visit is that the intensity of geothermal activity has increased to the south of the valley and it’s decreased on the northern side of the valley” the scientist confirmed.

Joseph notes that these are temporary changes and gave the assurance that the slight activity recorded is normal.

“It’s just water and gases finding new pathways and making things for themselves to surface on the earth” Joseph said.

The Volcanologist believes the current dry season can be attributed to these temporary changes in the Valley of Desolation and Boiling Lake.

Joseph said while there is nothing to be concerned about now, monitoring of Dominica’s volcanoes will continue.

According to the research official the findings will be relayed to the Office of Disaster Management (ODM).

Siesmic data confirms that the only volcanic activity recorded on Dominica in historic times was a phreatic (ash) explosion in the Valley of Desolation in January 1880.

This according to scientists was caused by the interaction of ground water and hot magma within the earth's crust.

Apart the minor event in 1880, there has been no volcanic eruptions in Dominica in historical times.