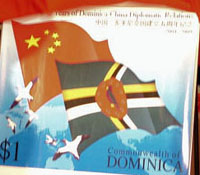 Prime Minister Hon. Roosevelt Skerrit says Dominica’s relationship with China has been a rewarding one. The Dominica leader made that remark as Dominica celebrates eight years of diplomatic relations with the Asian country.

In March 2004, Dominica established diplomatic ties with the Government of the People’s Republic of China, and according to the Prime Minister, this has had a major impact on the development of infrastructure across the island.

The Prime Minister also noted that one of the pillar projects of the Dominica / China relationship is the construction of the state-of-the-art Windsor Park Sports Stadium, the first of its kind on the island.

In January 2012, the Government of Dominica had the official opening of the Dominica / China Friendship bridge located next to the Roseau Market. The eight million dollar ($8 million) bridge constructed with Chinese funds signifies the ongoing friendship between the two countries.

We have 301 guests and no members online