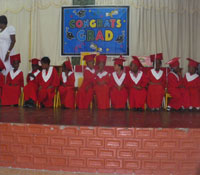 Prime Minister Hon. Roosevelt Skerrit has pledged Government’s commitment to make the necessary funds and resources available, so as to ensure that Universal Early Childhood Education is fully implemented later this year.

As Government moves closer to the full implementation of Universal Early Childhood Education carded for September 2012, education officials have been meeting with principals, teachers of Early Childhood centers as well as parents of children attending these institutions.

The purpose of these consultations is to give participants a better understanding of what Universal Early Childhood Education involves and to advise them on how best they can assist in the implementation process.

He also says Government hopes to change that figure to one hundred percent (100%) by September, 2012.

According to Hon. Saint Jean, Government is prepared to put the necessary structures and mechanisms in place to make universal pre-school education a reality.

A survey conducted in 2000 highlighting the quality of care provided at Early Childhood Development Centres on the island, found that there were significant weaknesses in the quality of programmes administered at preschools. These included inadequate physical facilities and lack of training of teachers.

The Minister assured parents, principals and teachers that Government has proposed several initiatives aimed at addressing these concerns.

We have 286 guests and no members online