NEWLY SWORN IN OPPOSITION LEADER PLEDGES TO WORK WITH GOVERNMENT 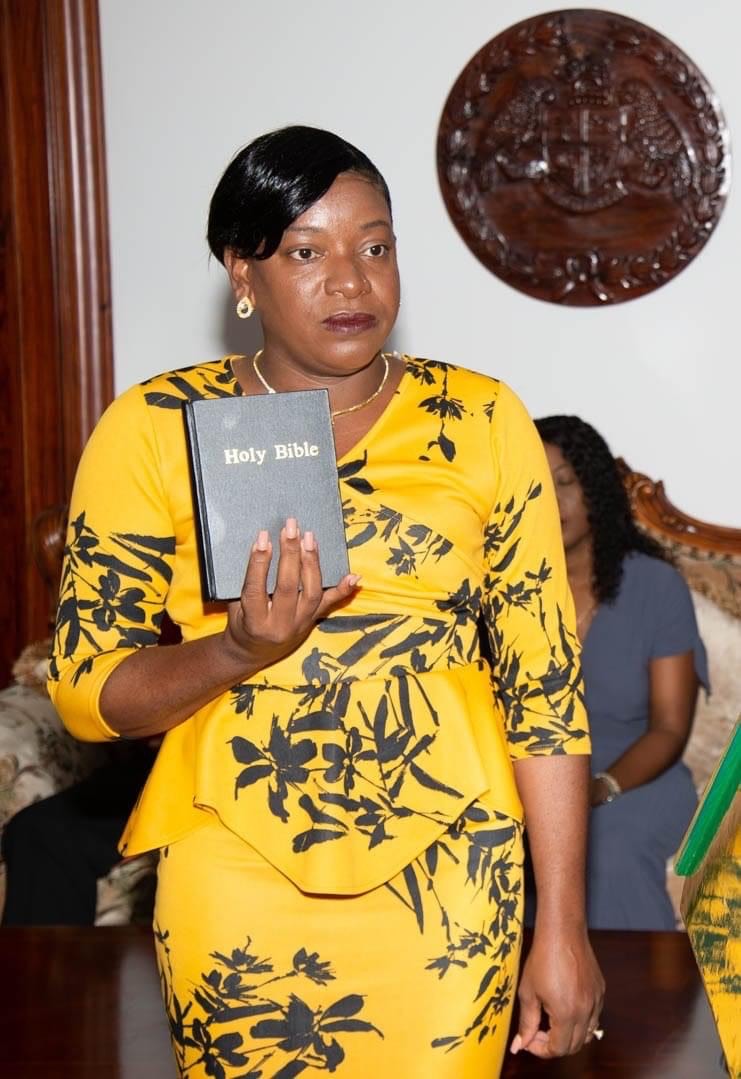 Newly sworn in Leader of the Opposition and Member Of Parliament for the Salisbury Constituency, Hon. Jesma Paul Victor has promised to work with the Government of Dominica during her tenure.

She was officially sworn in on Tuesday, December 20, 2022 at the State House by President of Dominica His Excellency Charles Savarin.

Hon. Paul-Victor stated that she is elated to have taken up the mandate as Leader of the Opposition.

“I am very much elated today. It’s a one in a lifetime moment for me and I also wish my mom was here. She passed earlier this year (2022). I know she would have been so proud of me today, unfortunately she isn’t but I am very happy for this opportunity,” Hon. Paul-Victor stated.

She noted that she aims to further familiarize herself with the constitution and rules of the house of assembly as she prepares for this new journey.

“My first thing on the agenda is to get myself familiarized with the Constitution and the Standing Order of the House. As you know I am very new to the political arena so it’s a learning process for me as well. It feels good and maybe I would like to continue in the footsteps of Dame Eugenia. She was the ‘Iron Lady’ and she had good principles and I would like to continue in that way. As I said it’s a learning process for me so I want to just go one with it and see what it brings,” she noted.

The newly sworn in Opposition Leader says that while entering the political arena was a spur of the moment decision, she wishes to continue her political journey as there are initiatives that she wishes to implement in the Salisbury constituency.

“I believe that competition takes two. On nomination day, when I saw that it was only one person running I thought that it couldn’t be fair, a competition has to be two people. So I thought quickly and then I spoke to my husband about it and I told him that I was going to run independently and see what happens, and I won. I was really surprised but I would like to continue. There are things that I see that my constituency needs, things that we have been pleading for a very long time, and they have not yet been delivered to us. So I want to in my term as Parl Rep for the constituency, and right now being the Opposition Leader for Dominica, to see if I can get these things for my constituency and moreover Dominica in general,” she went on to state.

Hon. Paul Victor explained that after discussions with the Member of Parliament for the Marigot constituency, who is also an independent candidate, they have agreed to share the role of Leader of the Opposition.

She then pledged to work with Government as she believes that it is the only way to see true progress in her constituency and the country by extension.

Meanwhile, Ms. Pauline Vidal, who is the older sister of Hon. Jesma Paul-Victor says she is proud of her sister’s achievements. She added that her sister will do her best to represent the people of Salisbury and Dominica in Parliament.

Hon. Paul Victor was elected to represent the Salisbury constituency at the December 6 general elections.

We have 526 guests and no members online