PM SKERRIT HONOURED WITH THE ORDER OF JOSE MARTI IN CUBA 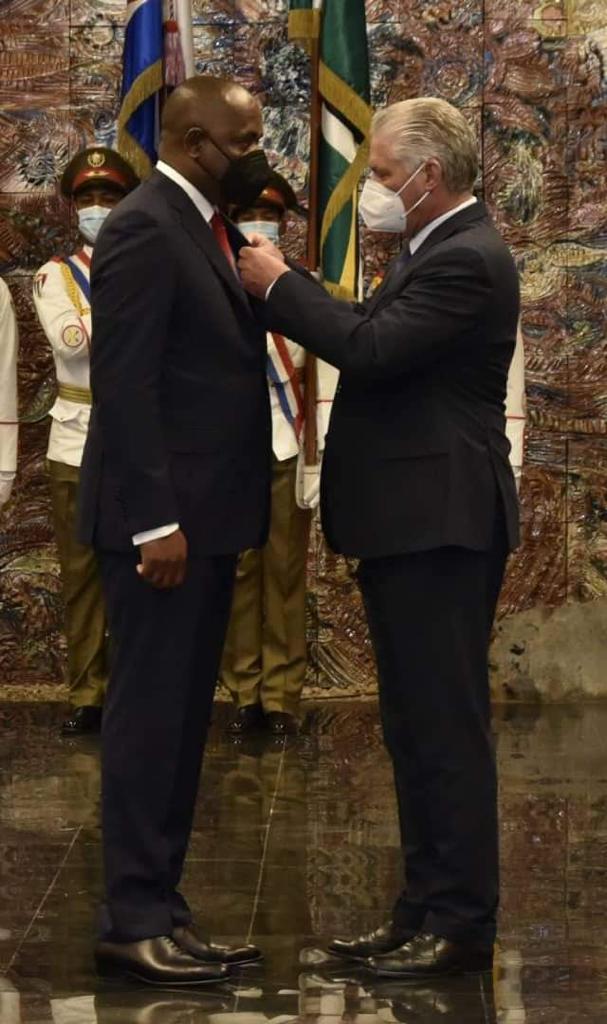 Prime Minister of Dominica, Hon. Roosevelt Skerrit has been bestowed the Order of Jose Marti from the Government of the Republic of Cuba.

This award has placed him among a number of prestigious world leaders who have previously received this award. The ceremony was hosted on Tuesday April 26 to conclude a three-day visit to the Republic of Cuba.

Jose Marti was a renowned national hero of the Republic Of Cuba. The order was established in 1972 and a memorial built in 1978 with the support of former President Fidel Castro. It is the highest decoration given by The Government of Cuba to Cubans, foreign citizens, and Heads of States and Governments, who have distinguished records in the defense of human rights, special contribution to education, culture, governance and the well-being of people.

"I sense that Revolutionary spirit still in this land; a spirit which arises out of your history, your character and your values. The Revolution is no longer one of guns but one of ideas, one which seeks to elevate the dominant principle of our world as the dignity of the human person,” Prime Minister Skerrit stated during the ceremony.

He expressed his ‘deepest gratitude’ to the Government of Cuba for bestowing him with this honour.

“Through the example of the Cuban people, the world has seen that size is no bar to excellence or global leadership; that determination is the greatest driver for success and that the human spirit is indomitable in its quest for dignity and freedom. For Cuba’s service to the Commonwealth of Dominica, the world and to humanity, I thank you. For finding me worthy of honour I express my most humble and deepest gratitude,” Prime Minister Skerrit added.

Prime Minister Skerrit is now the ninth recipient and the first leader in the Eastern Caribbean to receive such esteemed acknowledgement.

“This recognition is very significant for the Dominica Labour Party and for the country. This is yet another major international acknowledgement of the extraordinary attributes and accomplishments of the Hon. Dr. Roosevelt Skerrit. We are truly proud and blessed for the service and sacrifices of our leader. In the same way Jose Marti represents pride to the Cuban nation, we also share that pride with our people. Notwithstanding our small size as a country the accomplishments of our great leader is recognized by nations all over the world,” Hon. Laville stated.

The ceremony was well attended by Cuban dignitaries to include President of the Republic of Cuba, His Excellency Miguel Diaz Canel Bermudez and Dominica’s delegation.

We have 191 guests and no members online