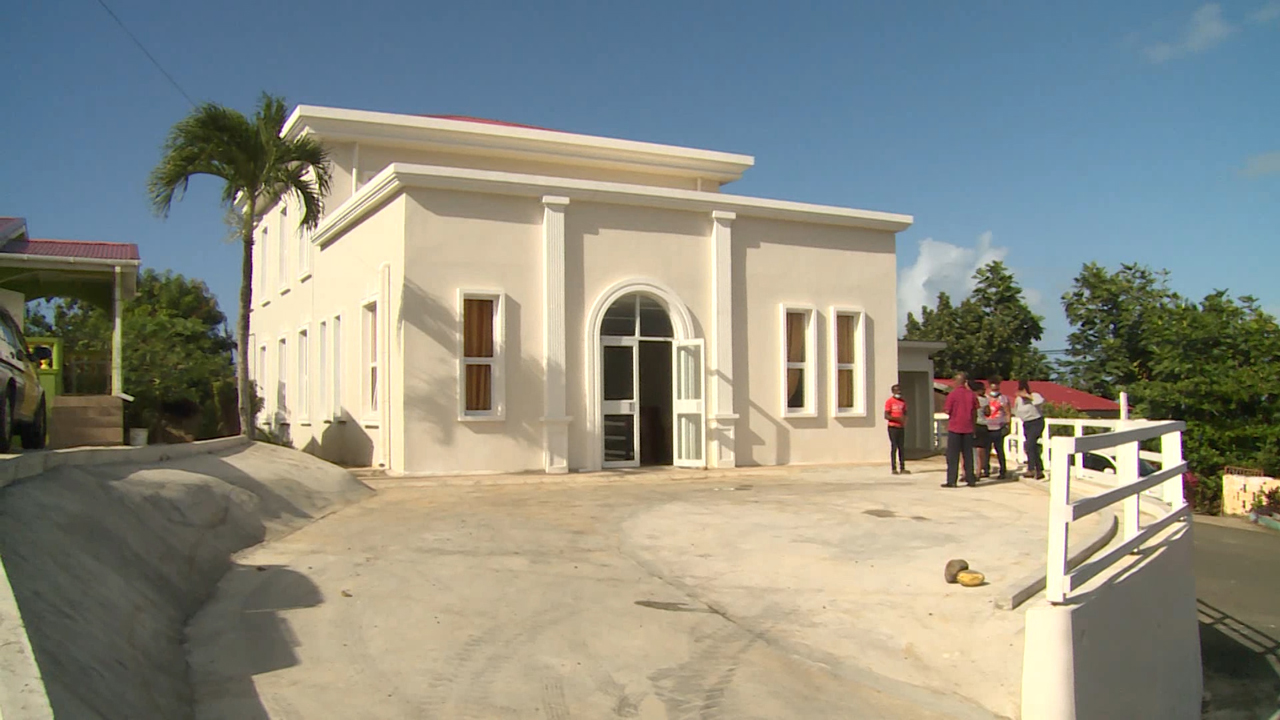 The Government of Dominica has reached yet another milestone on their quest to build a modern and robust health care system with the commissioning of the Stella LeBlanc Health and Wellness Centre in Vieille Case.

The centre, which was funded by the Citizenship By Investment Programme, was built with climate resilience at the forefront and equipped with reinforced concrete structure and impact resistant windows. It contains two examination rooms, doctors’ and nurse’s offices, two clinics, pharmacy and residential accommodation for medical staff.

The newly commissioned facility, was named after Nurse Stella LeBlanc, a 2020 Sisserou Award of Honour recipient. She received the award for rendering meritorious service to the Government and people of Dominica by her dedicated and untiring contribution is the field of Health and Community Development.

Mrs. LeBlanc’s contribution to the advancement of the Primary Healthcare Programme in the Portsmouth district where she served as a primary healthcare nurse midwife for over 23 years was deemed invaluable.

Nurse LeBlanc re-entered the nursing profession as a Community Health Care worker in 1980 serving the communities of Penville, Vieille Case and Thibaud until 1982. She became a Primary Care Nurse in 1984, working in the Portsmouth Health District both at the Portsmouth Hospital and various health centres.

She also provided services in surrounding communities including Paix Bouche and Dos Dane where she served as a midwife for many years.

Nurse LeBlanc was very passionate about the advancement of Primary Health Care Services, and she would do her best in carrying out the duties entrusted to her during or after working hours, and even during her vacation leave.

She retired from the public service in 2003, but given the staffing constraints in nursing, especially in the area of midwifery, she agreed to return on contractual employment to assist with alleviating the crisis.

Prime Minister of Dominica and Member of Parliament for the Vielle Case Constituency, Honourable Roosevelt Skerrit

“I dare say when it was brought to her attention that she would be recognized, she was not willing to accept again because of the profoundness of her humility, because for us and for her, it is about service to people. It is not about what you get in return but selflessly giving your time and your energy to people and also emphasizing with people’s struggles.

The Prime Minister noted that the facility will improve the delivery of health care in the community as well as enhancing the overall appearance of the community.

The Member of Parliament noted that a holistic approach was taken with the construction of the facility.

“This is welcoming to the village. It is a major investment by the Government in improving the delivery of primary health care, improving the facilities. But also ensuring that what we have done with these facilities across Dominica, not only provide for the clients who will come here but also for the comfort of the District Nurses not for the community. So we are taking a holistic approach to the construction of these health facilities across Dominica,” PM Skerrit stated.

Minister of State in the Office of the Prime Minister with responsibility for Telecommunications and Broadcasting, Honourable Oscar George stated that this Government has shown that health and wellness is a priority in it’s quest to build a Dynamic Dominica.

Minister George went on to urge the Dominica’s youth to include regular health check-ups in their routine as part of a healthy lifestyle.

Minister for Health, Wellness and New Health Investment, Dr. Irving McIntyre explained that the new Health and Wellness Centre is a well-deserved addition to the projects ongoing in the community as these projects are focused on various sectors of their livelihoods. He encouraged citizens to not take the facility for granted.

“This is part of the bigger picture where all the determinants for your well-being and your development as a community is being brought, literally to your doorsteps. I trust you will not take for granted, all these interventions that your Government is doing for you the people of this community, the ball is in your court; the Government has been and is playing its part in delivering the goods and services to you. It is up to you to use these facilities to your benefit,” the Health Minister urged.

Project Manager for Montreal Management Consultants Establishment (MMCE) Mr. Ahmad Alkhatib stated that health centres will be built in Roseau as well as other areas of Dominica. He noted that MMCE is proud to be assisting Dominica in its quest to build a resilient country.

“I am amazed and proud to be part of the transformation of the health system in Dominica. I cannot help but stargaze at the rolling out of these health centres. We have been informed that the Government of Dominica will expand the utilization of this programme to include Roseau and other areas, and as always we look forward to the challenge. Let me reaffirm the importance of the work that we are doing with the Government of Dominica in helping to attain and sustain proper development on the island in the areas of housing, health and education. We look forward to continue serving this beautiful country,” Mr. Alkhatib stated.

Meanwhile, Nurse Stella Leblanc expressed her gratitude for the honour that she has received.

“I had to agree, but I don’t look for those things. I prefer to just do what I have to do. I love simplicity, I am happy that I have reached thus far. I am seventy two, but I still want to work,” Nurse LeBlanc noted.