CONTRACT SIGNED FOR THE REHABILITATION OF THE GENEVA PLAYING FIELD 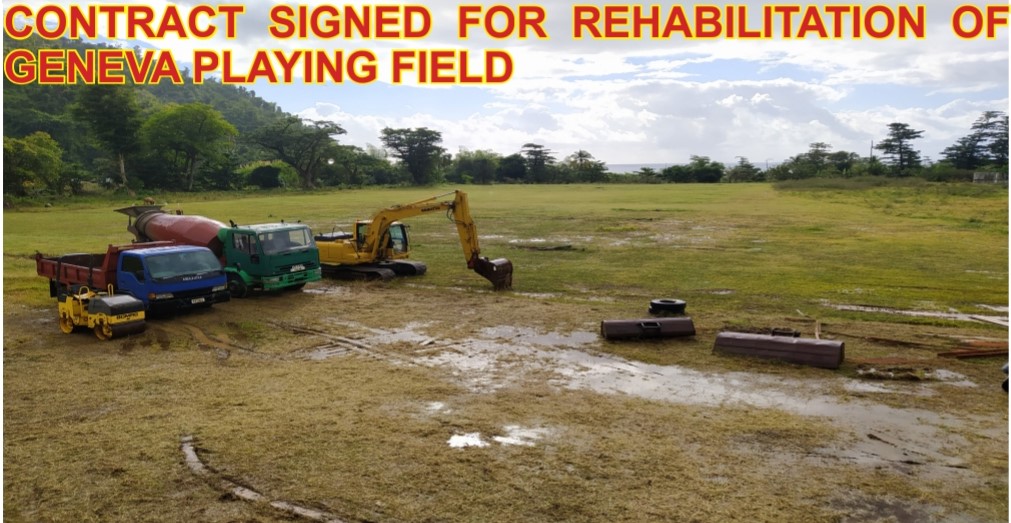 The Government of Dominica has continued to prioritize the development of its people through the expansion of its sporting sector.

As part of the initiative, the Government of Dominica has signed a $476,000 contract with Mr. Holford Vidal for the rehabilitation of the Geneva Playing Field in Grand Bay.

Member of Parliament for the Grand Bay Constituency Honourable Edward Registe says that he is “delighted that we are moving forward with this project. I know this is a project that the Grand Bay people have been waiting on for a long time.”

The Parliamentary Representative stated that FIFA through the Dominica Football Association (DFA) recently contributed a sum of one hundred and fifty thousand dollars for drainage of the field.

Honourable Registe says the second phase will be funded by the Government of Dominica.

“I want to recognize the Dominica Football Association and FIFA as well for having made a first contribution of a hundred and fifty thousand dollars to begin the irrigation of this field. We did put it to very good use. One half of the playing field is well drained and we look forward to the other side being as well drained. The Government of Dominica has made the contribution to rehabilitate the other half of the playing field. They are going to drain the other side and then grass the playing field so that hopefully, within the next several weeks, we can begin to see sporting activities here again,” the MP explained.

Minister for Sports, Culture and Community Development Honourable Roselyn Paul says the rehabilitation of the field reflects Government’s commitment to the development of sports.

“This is contract of just below half a million dollars is being signed at a time which we knows is very challenging, not only in Dominica but globally. So this indicates to you the importance, the significance that the Government places on the development of its people and on the development of sports,” Honourable Paul stated.

Meantime, Permanent Secretary in the Ministry of Sports, Culture and Community Development Mr. Lucien Blackmoore gave a detailed description of what the project will entail.

“We will have the entire perimeter of the playing field and the entire outfield itself being graded, and fitted with underground drainage; it will be sub surface drainage. There will also be drainage on the perimeter toward the playing field and of course that would be followed by grassing. The grassing is not ordinary grass; it will be proper vegetative cover to ensure you have a very even and well defined outfield that will manage the runoff of the water while at the same time will not be too heavily graded so that you have any discomfort on the playing field. It will be done to the standard for cricket as well to the standard for football,” Mr. Blackmoore explained.

This project is one of the many initiatives ongoing in the development of the country’s sporting sector. Other projects include the rehabilitation of the Windsor Park Sports Stadium forecourt, the construction of a new indoor facility in Massacre as well as the rehabilitation of numerous basketball hard courts and playing fields around the island.