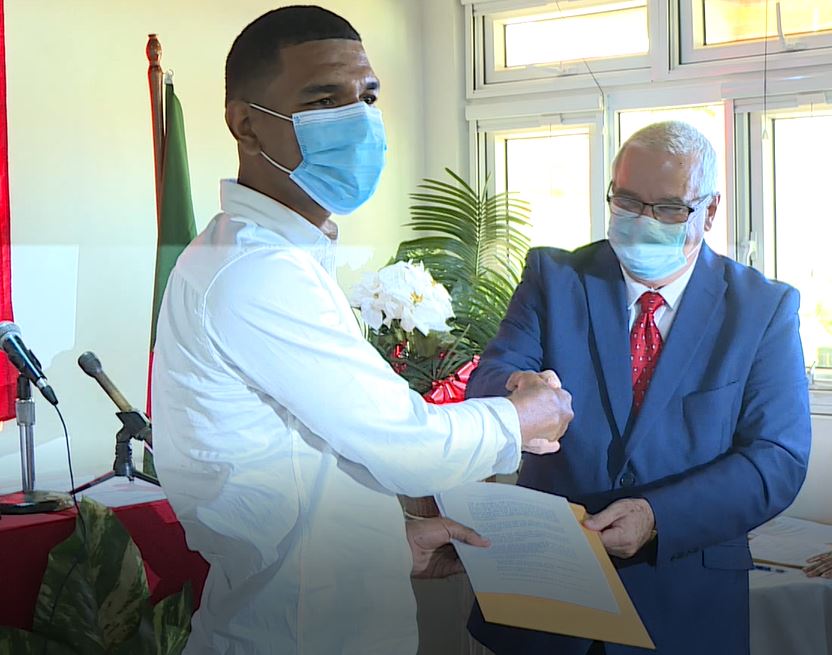 The individuals received their scholarships at a ceremony held at the Cuban Embassy on Friday, December 18 2020.

Permanent Secretary in The Ministry of Education, Human Resource Planning, Vocational Training and National Excellence Mrs. Chandler Hyacinth says the Cuban Scholarship Programme has been around for decades and is aimed assisting Dominicans and building bilateral relations.

“A four decade long programme, which is designed to enhance human capacity in the health sector, strengthen bilateral relations with Cuba and offer scholarships to citizens coming from low economic status. The government of the Commonwealth of Dominica continues to make studies in promoting human resource development through education happen,” Mrs. Hyacinth stated.

Mrs. Hyacinth says that approximately three hundred students have benefited from the Cuba Scholarship Programme between 2000 and 2020.

“Once again the People’s Republic of Cuba is offering Dominicans an opportunity through the CARICOM scholarship programme to pursue tertiary and advance education. Over the years, hundreds of Dominicans have benefited from this scholarship programme. Between 2000 and 2020 almost three hundred students would have benefited from this educational experience,” PS Hyacinth stated.

Mrs. Hyacinth says the programme contributed to improvement in services in numerous sectors in Dominica.

“This CARICOM- Cuba Scholarship Programme has assisted us greatly in our national development, not just in medicine. It has contributed to the training of specialist in a number of other areas. Every year, we welcome doctors, dentists, technicians, agronomists, accountants, and people in various their fields following their graduations from their field of study in Cuba,” Mrs. Hyacinth added.

Meanwhile, Minister for Education, Human Resource Planning, Vocational Training, and National Excellence, Honourable Octavia Alfred says she is grateful for this gift of education as education is needed for individual growth and economic development.

“I must underscore how important this gift of education is, because in an age of advancing knowledge and unprecedented advancement in technology a learned people, is imperative for individual development and for economic growth and sustainability. In an age where we are challenged by successive disasters and now a pandemic, it becomes even more urgent to empower our youth with new skills and new knowledge to take them on the challenge of the world,” Honourable Alfred stated.

The Education Minister added that education remains a priority for the Government of Dominica and the assistance from the Cuban Government should be acknowledged.

“Education remains a major priority as we seek to elevate the lives of our people. Therefore the continued investment of the Cuban Government in our people and in the development of our human resource, must be acknowledged and highly commended. The Government of Dominica remains extremely grateful for this gesture of friendship and goodwill, and looks forward to continuing a positive relationship with the Government and people of Cuba,” the Education Minister explained.

Minister Alfred added that Cuba has contributed greatly to the development of Dominica in all sectors.

“Cuba we know has played a significant role in the advancement of our people in ways that are broader than education. Just this year, the country benefitted from the expertise of hardworking Cuban health personnel who assisted us in the fight against covid-19, and we will forever remain grateful for this timely intervention,” Minister Alfred highlighted.

Cuban Ambassador to Dominica, His Excellency, Vlises Ignacio Arraz Fernandez says Cuba will continue to contribute to the development of Dominica and other Caribbean countries, despite the blockade imposed against them by the United States Government.

“Relations between Cuba and Dominica are part of ties that unite Cuba and the Caribbean, based on the principles of solidarity, friendship, brotherhood, gratitude and full support raised by the historical leader of the Cuban Revolution, Commander in Chief Fidel Castro Ruz. Nothing and no one can break those ties. We will continue to contribute to the development of our Caribbean brothers and as part of this, our brothers of Dominica,” His Excellency Fernandez.