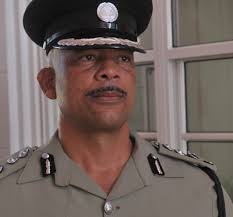 “One of my major tasks as Acting Chief is to seek to motivate the men and have them understand that we need to get back to where we know the police force used to be. When I joined in 1990, the enthusiasm and the vigor was all there, but that has sort of dissipated over the years, so I intend to get the back to being highly motivated again,” the Acting Chief stated.

The Acting Chief of Police says one of the ways in which he will seek to motivate the members of the force is with his open door policy.

“As I indicated, I have an open door policy and the offices can come to me at any time and as long as I am not with somebody else, I will see them. This is just to instill a high level of confidence in them, and whatever they discuss with me will stay with me,” he noted.

Mr. Corbette says he would like the public to regain its confidence in the police force and this will encourage collaborative efforts from the police and the public ensuring a peaceful country.

“A lot of things have caused the public to lose its confidence in the police. Some people will say that the police is not confidential and they leak information. There must be an officer that a member of the public can speak with in confidence. I know before covid-19, the community development program took sort of a back burner because of covid, because the coordinator had to travel and got stuck in England but we will attempt to revitalize it. We have to be very careful that we do not have large crowds but just by going about our normal policing, we intend to assist or to help the community policing initiative,” Corbette explained.

The Acting Chief of Police says he intends to reduce crimes in Dominica.

“I want to congratulate him because this is the nominee the Police Welfare Association and its members have always favored. We commend the Government for choosing Mr. Corbette as the Acting Chief of Police. We wish him well, we wish him all the best and going forward we want to offer him our full support as an association and we will work with him,” Drigo stated.