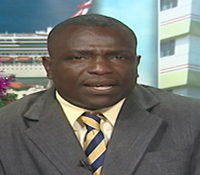 Road projects dominated infrastructural projects in the Castle Bruce Constituency during the year 2012.

This was confirmed by Parliamentary Representative for the Castle Bruce Constituency, Hon. Johnson Drigo when he addressed the nation this past Christmas.

According to Hon. Drigo thousands of dollars were spent on completing a number of community roads.

“Several road projects were undertaken in 2012. We saw the completion of the Foamier Bridge. Over 70,000 dollars was spent on the completion of Phase one of the Cochran Road in Good Hope. An additional $150,000 was spent to rehabilitate the Fond Blur Road in Petite Soufriere and over one million dollars was spent on clearing of landslides and river works from Castle Bruce to Petite Soufriere.

Hon. Drigo added that “over $400,000 thousand dollars was spent for the clearing of landslides and water logged swamp materials over Good Hope Village and the Resource Centre. The Government of Dominica has expended over $800, 000 for the rehabilitation of the section of road leading from Pond Case to Castle Bruce via the Carib Territory.”

He noted that Government is presently reconstructing the road network from Castle Bruce to Petite Soufriere, with $180,000 having been invested thus far. This he says had been done “to replace the existing double surface dressing with rigid concrete pavement in the more waterlog and landslide prone areas of the road.”

The Parliamentary Representative confirmed that attention will be given to the upgrade of the Jalousie road in 2013 .He said work on the Petite Soufriere to Rosalie Link Road will also continue early in the new year.

The parliamentary Representative also confirmed that funds have already been allocated for two major projects in the area namely the Good Hope Bayside Bridge and the San Sauveur Retaining Wall.