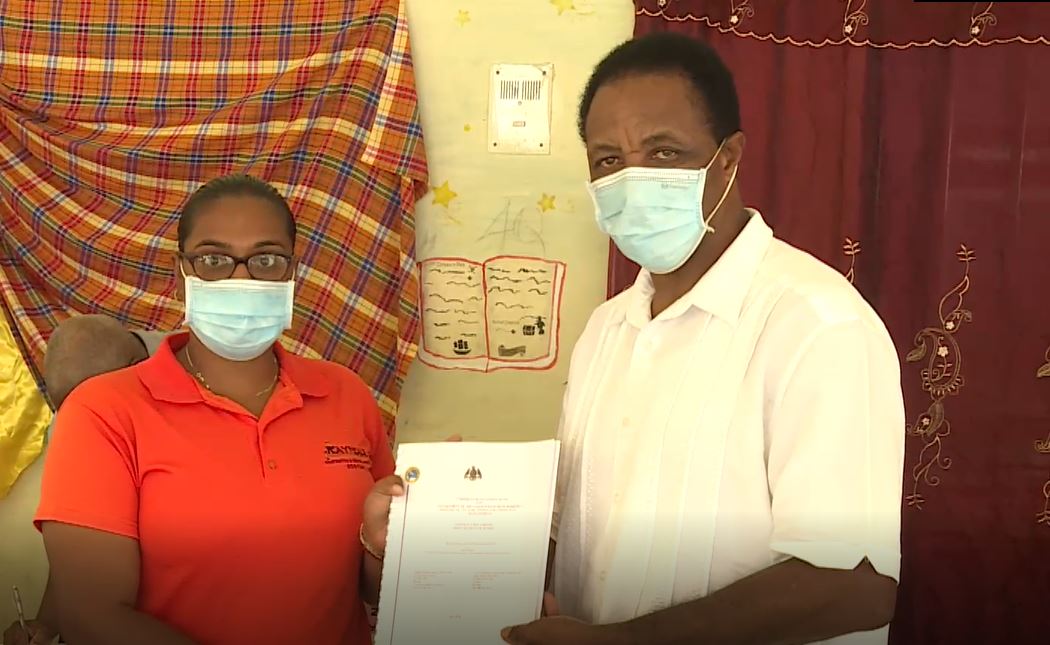 The Government of Dominica (GOCD) has secured a Grant from the Caribbean Development Bank (CDB) towards the cost of the implementation of the Ninth Basic Needs Trust Fund Programme (BNTF 9).

Seven projects will be implemented under BNTF 9, six of which have already seen the contracts signed at various ceremonies held last week.

The Castle Bruce Secondary School production facility will be built at a cost of over six hundred and thirty thousand dollars.

Project Manager at the Basic Needs Trust Fund, Matthew Carrette gave a detailed overview of what the project would entail.

“The production facility entails the construction of a concrete chicken coop with troughs and feeders. Provision is also made for small cages, hatching pens and breeding pens. The second component is the construction of a concrete slaughter house with a timber and metal roof. We also provide for the installation of waste basins, aluminum tables and knife sanitizers. A washroom facility will also be built,” Carrette stated.

“The assistance of the BNTF will come in handy not only to prepare our students for CXC, but also to present the opportunity to engage in fund raising for the school. We welcome this assistance which will allow for students to engage in animal husbandry and sell their produce to their community,” the Minister stated.

The Dominica Community High School will also benefit from BNTF-9, as a 1.2 million dollar contract was awarded to Construction and Industrial Equipment Inc. for the construction of an extension to the school building, which will consist of a two floor concrete structure.

Member of Parliament for the Roseau South Constituency, Honourable Chekira Lockhart-Hypolite stated that the contract signing marks another commitment to developing communities.

“I am grateful and humble for this contract signing, as this marks yet another commitment to the improvement of communities in ways which impact families and individuals. I represents a significant improvement in the livelihoods of people, enhancement of socio-economic development of communities, provision of resources for the under privileged families and a reduction in vulnerability,” the Member of Parliament noted.

Minister for Sports, Culture and Community Development Honourable Roselyn Paul noted that the new extension will assist with addressing he many challenges faced by the students.

“The new block will address this concerns and provide an upgraded learning environment for students at an improved teaching atmosphere for the staff and much needed space to house teaching aids and equipment. The new resource room, the auditorium, library and computer lab will facilitate special training sessions for the students as well as their parents,” the Minister explained.

A contract in excess of 540,000 dollars was signed and awarded to Millennium Land Company Ltd. for the construction of the Morne Prosper Primary School Security and Sports Facility Upgrade.

According to Prime Minister Honourable Roosevelt Skerrit, upgrading the facility represents the importance of a school in small communities.

“We understand and appreciate as a Government the importance of our school facility in small communities, and no matter how small the population of the school is, we treat these schools as if it was a massive school. Because education is important, access to education is important and we need to ensure that we can have these school plant upgraded. Recognizing that this is also a shared facility with the basketball court and the necessary arrangements have been made to allow the community to have access to the facility, but primarily during school hour sit will be for the students and staff,” the Prime Minister stated.

Parliamentary Representative for the Roseau Valley Constituenxcy, Honourable Dr. Irving McIntyre noted that the addition of a court to the facility will assist with generating income in his constituency.

“The idea also is that we have lighting for the court. It brings in another aspect for sporting, not only in Morne Prosper but for the entire Roseau Valley. So if we have a basketball court of that standard in Morne Prosper, we can have games in the evening and that can even bring more economic development to the village of Morne Prosper. So it is a bigger picture, is not just a court, but it brings some economic advantages to it as well,” Dr. McIntyre stated.

The Basic Needs Trust Fund also awarded Regional Contractors Ltd. a contract worth 742,500 dollars for the upgrading of the Woodford Hill playing field.

Mr. Matthew Carrette explained that one major aspect of this project is to ensure that the field has proper drainage.

“One component is the field drainage, which is very important. That will involve all the trenching, all the block works, the drainage layer, the perforated pipes, all the sub-structure works to drain the field properly and that’s a main aspect of the project,” the Project Manager explained.

Parliamentary Representative for the Wesley Constituency urged the contractors to employ persons within the constituency and encouraged his constituents to take advantage of the employment opportunities.

“This project is in excess of seven hundred thousand dollars. I urge the contractors to try his best to utilize our local skilled men and I urge the young men and women within the constituency to take advantage of the employment opportunities which may arise,” The Member of Parliament prompted.

The Dominica Association of Persons with Disabilities (DAPD) are also beneficiaries under the BNTF-9 program.

A contract of over 900,000 thousand dollars was signed, and signifies the upcoming construction of a modern and resilient facility for persons with disabilities.

Minister with responsibility for Dominicans with Disabilities, Honourable Dr. Adis King stated Labour Party Government is committed towards the advancement of person living with disabilities.

“This Labour Party Government under the leadership of Prime Minister Roosevelt Skerrit continues to place the wellbeing of all citizens at the core of our development. We are therefore committed to the holistic development of all the members of the DAPD family. I can safely say that the DAPD member and all other members with disabilities who are not yet members of this association are of paramount importance to our mandate,” Dr. King stated.

According to the Executive Director of the Dominica Association of Persons with Disabilities, Natalie Murphy, the newly constructed building will serve as a module of what a disability friendly building should reflect.

“I would just like to say that on completion the building which is situated to my left will be transformed and it is going to demonstrate what it is to build a physically accessible building. It will also serve as a model to other builders to build and create disability friendly facilities,” Murphy added.

One more project will soon be signed under the BNTF-9 program for the construction of the Morne Prosper Water Supply.

Since 1979, the Basic Needs Trust Fund has impacted over 3 million people in poor communities throughout the region by investing in community-led development.

Individuals, organizations and governments in BNTF participating countries are focused on poverty reduction and empowering vulnerable groups, including women, children and the elderly.

Community participation is essential to every sub-project, as this facilitates local ownership of BNTF investments and enhances social capital within each community.