$2.5M FOR MULTI-PURPOSE FACILITY IN STOCKFARM 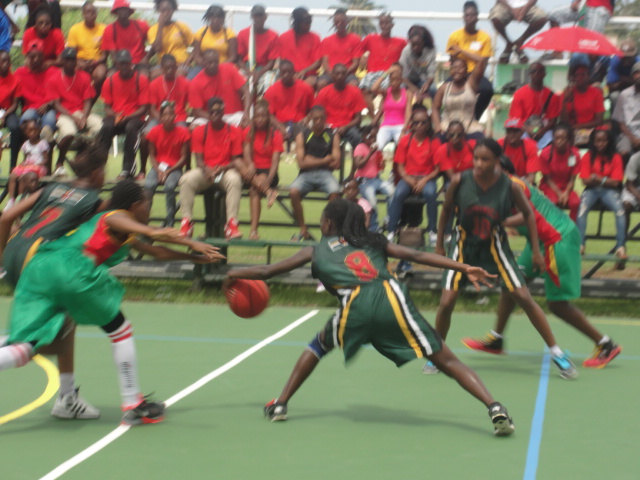 Prime Minister Roosevelt Skerrit says Government views sports development as a key component of their development agenda. Sports plays an integral part in the development of young people. Government in this financial year has allocated two point five million dollars for the construction of a multipurpose sports complex at Stockfarm.

“In fiscal year 2020 2021 an amount of 2.5 million dollars has been allocated for the construction of the multi-purpose sports complex at Stockfarm, which will include indoor and outdoor courts, an Olympic sized swimming pool and tennis courts, and will be outfitted with essential amenities to include showers, locker rooms, and the like. Work is expected to commence by the second quarter of this fiscal year. In addition Mr. Speaker there are a number of playing fields and hard courts which will be rehabilitated during the fiscal year including the completion of the Rayburn Blackmoore Massacre hard court,” Prime Minister Skerrit stated.

Meantime, Minister for Sports Honourable Roselyn Paul says provisions have been made towards continuing phase for restoration works at the Windsor Park Sports Stadium which is in excess of two million dollars.

“Provisions have been made towards continued restoration works at the Windsor Park Stadium, phase four, in the amount of 2.3 million. Much of the work has started and we were set on target for international cricket this year, and we continue to put things in place,” Minister Paul noted.

Minister Paul says Dominica now has a new electronic scoreboard which is a basic requirement for international cricket.

“I am happy to report that one of the main requirements which is an electronic scoreboard for international cricket is here on island. It was purchased at a cost of 600,000 dollars and is awaiting installation. Meantime two contracts have been awarded for the works on the base for the installation of the scoreboard,” the Sports Minister noted.

The Minister says equipment for the hard courts which are located in the forecourt of the Windsor Park Sports Stadium are already on island and work is expected to be completed this year.

The covering of the Massacre hard court is also nearing completion. Minister Paul says this project will aid with decreasing the levels of obstruction faced by athletes who are unable to train during inclement weather conditions.

“Works on the Massacre indoor facility is ongoing. For the past few years, the Massacre hard court became the main facility for national basketball. Mr. Speaker, Dominica has never had an all-weather sports facility. The absence of such a facility has hindered the development of indoor sports, particularly basketball, netball and volleyball. Many such events have had to be cancelled due to inclement weather or wet courts. So, therefore the covering of the Massacre hard court and the development of this indoor facility will reduce the frustration and low motivation of our basket ballers, volley ballers, netballers and other players,” she noted.

The completion of the facility will also assist with the generation of income in the community.

“The covering of this facility will also result in improvement of the standards of play since our athletes will be exposed to better quality sporting facilities. It would also engender better utilization of resources by both organizers and participating teams. The facility in Massacre will also be a hub, bringing people together for sporting events and therefore creating economic activity for people surrounding these communities,” the Minister stated.

“The national multi-purpose sporting complex at Stockfarm will commence by December 2020 and 2.5 million dollars is budgeted this year for this project. The final approval for designs and environment impact report is available and bids for finalizing the designs are currently being solicited. This is too allow commencement by end of the year 2020,” Hon Paul added.

Three multi-purpose indoor courts will form part of the sports complex.  The Sports Minister went on to say “the facility consists of three multi-purpose indoor courts for basketball, volleyball, and netball. This is too enable Dominicans to bid for hosting of netball tournaments at the regional continental and international levels. A basic requirement for the various age categories is the need for pre adjacent courts for hosting any tournament. Mr. Speaker, netball is the only all women sport at which Dominica can participate in at the regional level and given the continued interest in providing opportunities for women this multi-purpose facility is very welcome and fitting.”

She says the fifty meter Olympic size swimming pool will create an opportunity for Dominica to host regional events.

“In terms of the fifty meter Olympic Size swimming pool, this will also better position Dominica in terms of hosting regional events. It will allow locals to train under required conditions and standards to compete at the highest level. A fifty meter pool will again place us at the top of the list in the region,” The Sports Minister further added.