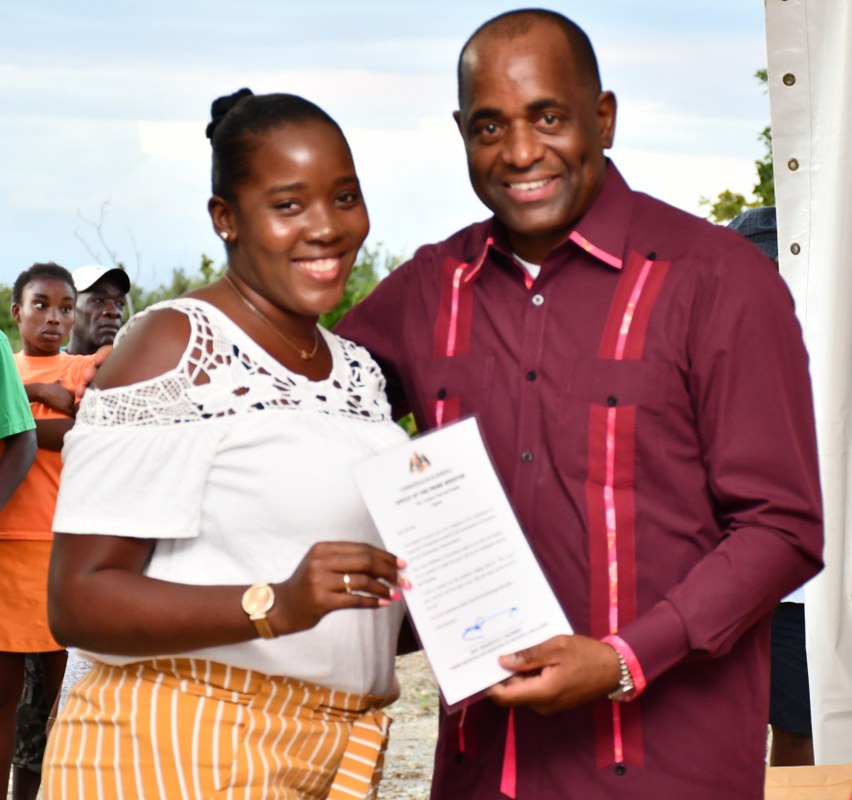 Prime Minister of Dominica Honourable Roosevelt Skerrit says his Government will continue to address the housing needs of the less fortunate.

The Honourable Prime Minister gave the assurance as he addressed the handing over of apartments to residents of cotton hill on Sunday December 29, 2019.

Twenty-four families moved into the brand new apartments, which are being funded by Dominica’s Citizenship by Investment Programme (CBI).

The Honorable Prime Minister stated that he will continue to assist citizens of Dominica who are in need, despite their personal or political affiliations.

“Yes, you may have gone to the bank and get your mortgage, and thank God for that but there are people who are unable to do that. And what do you do as a Government when they ask you for help? What do I do as a Prime Minister? The Lord places us in leadership positions to help people, to elevate people; and that is how I have always seen my role as Prime Minister of Dominica. You are placed in a position of leadership not for yourself, but for the greater good of humanity and to always look after the less fortunate. This is why I do not care who vote for me, or who doesn’t vote for me, as long as I am helping people who need it, I will continue to look after the less fortunate in our society,” the Honourable Prime Minister stated.

He noted that in spite of an individual’s standing in society, they should be able to have a decent home.

“Housing is a necessity, but these houses are luxury homes. And you can go to any part of the world, in any hotel and these apartment buildings will compare to almost anyone that you have slept in before outside or inside of Dominica. And you can understand why many people believe that these houses are too good for poor people. But the philosophy of this Government is that every man is born equal. But the equality started probably based on where you come from, your title, your parentage, your social upbringing among other factors. But we believe that every man is equal, and we must seek to ensure that equality of mankind is maintained and preserved. And that is why I am saying to you the beneficiaries that you are no less of a person than anybody else in the country to receive a decent home for you and your family,” Honourable Austrie noted.

Project Manager of Montreal Management Consultants Establishment, Christopher Timmins gave details on some of the features of the apartments, further assuring the beneficiaries that the homes are built to withstand category five hurricane conditions.

“We are confident that these new houses will withstand the worst of what the weather gods can throw at them. They are made of reinforced concrete. They have got reinforced concrete roofs underneath the galvanize sheets. They have got hurricane resistant windows. The services will be underground completely. We have designed them, we have built them, we have fitted them out to the best possible standard that we can do. You’ve got fitted kitchens, fully tiled. They are complete. They are insulated to withstand the heat so that you don’t need air conditioning. Everyone has gotten modern quality bathrooms, up to a five star resort I would say,” Timmins explained.

Many of the recipients expressed their gratitude to the Government.

An emotional Allina Pierre, who received one of the apartments said it was always  her dream to own her home and she thanked Government for making that dream a reality.”