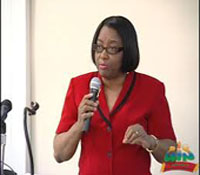 Prime Minister Hon Roosevelt Skerrit has expressed his support for the candidacy of Dr. Carissa Etienne for the position of Director of the Pan American Health Organization (PAHO).

During the CARICOM heads meeting in Suriname last week, the Dominica leader used the opportunity to solicit support for Dr. Etienne from other CARICOM member states.

Dr. Etienne began her career with the Ministry of Health in Dominica as a medical officer at the Princess Margaret Hospital in 1977 and by the early 1980s was serving on an executive team in charge of planning and implementing an island-wide reorganization and decentralization of health services with emphasis on the primary health care approach.

She has since held several key positions in the Ministry of Health, including Chief Medical Officer, designated national epidemiologist, chairman of the National AIDS Committee and coordinator of the National AIDS Program. She was also the government's lead advisor on strategies for the prevention, control and management of HIV/AIDS, and was responsible for implementing programs in this area as well as mobilizing and managing funds from donor agencies.

In a recent interview with local media, Prime Minister Hon. Roosevelt Skerrit said that CARICOM member states as well as several Latin American countries have fully endorsed Dr. Etienne’s candidacy and have given their commitment to support her endeavors.

We have 347 guests and no members online