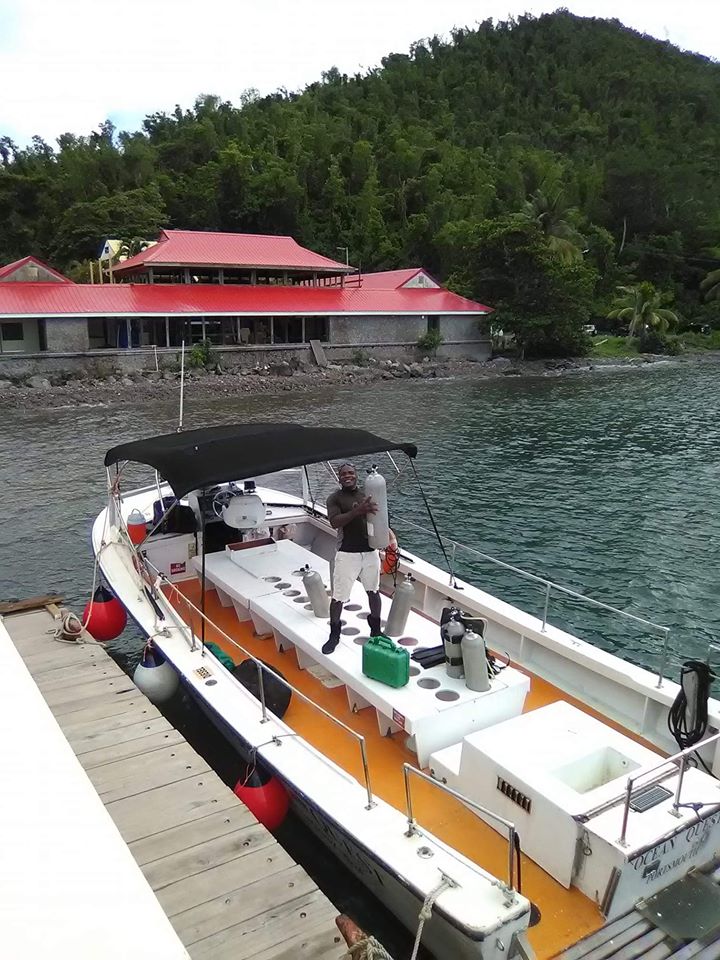 Dominica is becoming the go to destination for the ideal vacation and the Ministry of Tourism’s goal is to ensure visitors have the best experience on island.

Two five star hotels are opened to the public, the Cabrits Resort Kempinski in Portsmouth and Jungle Bay Resort and Spa in Soufriere.

Several other five star hotels are currently under construction and this is all part of increasing the number of persons visiting the island.

According to the Minister for Tourism and Culture, Senator Robert Tonge, a new authority will be put in place to promote nature isle tourism. He noted that the Labour Party Government will establish the Dominica National Tourism Authority (DNTA), through the restructuring of the tourism board, into a more strategic, better equipped and prepared entity. The DNTA will lead and support market diversification and penetration, new tourism business development and investment opportunities.

“We want to ensure that people come to Dominica and it’s all about an amazing experience. We have the most centenarians in the Caribbean, which means that our people eat so much fresh foods. We have waterfalls, river bathing, our lovely rum punches; all these things help to extend the lives of our people. So Dominica is truly a unique experience very different from many other countries,” Senator Tonge stated.

The Honourable Minister made reference to opening of the Cabrits Resort Kempinski and noting that these are of some of the achievements Government and Dominicans are proud of.

“We are very proud as a people of what has been accomplished here. That too is also part of the vision of our Honourable Prime Minister, Dr. Roosevelt Skerrit. His vision was to use the Citizenship by Investment Programme to allow investors to come in and invest in Dominica through these properties and again to increase economic activity in our country. We have quite a number of people come to Dominica but at the same time we wanted to attract a different type of clientele who would obviously have a lot more disposable income, which would again allow our people in the country to benefit. So his vision has come to a reality although many people thought that it would not happen. I remember four and half year ago, there was just a cleared piece of swampy land but the Range Management Team had a vision and today that vision is a reality and we are actually looking forward to some amazing new things from them in terms of them another property,” he noted.

Dominica is not only known for its waterfalls and lush vegetation but for one of the world’s biggest night time event, the World Creole Music Festival.

The World Creole Music Festival which is held on the last weekend in October every year, brings a number of visitors to the island.

CEO of the Discover Dominica Authority, Colin Piper stated that this period is one of the best for Dominica’s economy as visitors are booked into hotels and money is being spent on food and many other activities in the island.

“By all accounts, the WCMF has been a great success. I don’t have all the final details yet, but certainly I want to indicate that for the same time period, which is from the Friday before the World Creole Music Festival to the Saturday of the World Creole Music Festival, we had close to sixty-eight hundred (6,800) people come in to our island by ferry and by planes. And so that is a thirty-four (34) percent increase over the same period of that of last year; so that is definitely some positives in that regard. We do not have the final figures yet for the patronage, but anybody who was there would acknowledge that certainly the patrons to the festival certainly were more than last year. So in those two regards, we certainly want to indicate that Dominica needs to tap itself on the back, and accept its kudos as it relates to our contribution to the Caribbean’s calendar of events or festivals,” Piper explained.

Piper informed that DDA continues to market Dominica as the destination of choice. He noted that marketing the different hotels which are opened and will be opened in the near future is high on DDA’s list. He went on note that he is confident that this strategy will increase the number of visitors.

“Most recently, we represented Dominica at the World Travel Market, which is one the largest trade shows in the world and I represented Dominica I that regard. I had over forty-two meetings with travel agents, tour operators, interviewers, influencers, all of which were interested in learning what it is that Dominica is doing. So we informed, we educated and we gave the good news in terms of some of the CBI properties that are opening up such as Jungle Bay, Kempinski, as well as speaking about the properties that are to come out that being Rosalie Bay Eco Resorts which is to open in February 2020; and also the advent of construction with outfit doing the property in Laudat, that’s the Sanctuary Villas, and also the advent of the Secret Bay residences. So all of that information was received by the tour operators at World Travel Market, and they will be utilizing that to determine how they now promote and market the destination,” Piper noted.

Following the passage of Hurricane Maria in September 2017, Government spent in excess of six million dollars to rehabilitate sites which were destroyed by the storm. In January of 2018 Dominica welcomed its first cruise ship, just a mere four months after one of the deadliest storms the country has ever seen.

In October, the 2019/2020 cruise season was officially opened and there will be an increase of thirty thousand passengers.

“We have a hundred and sixty calls scheduled for this year 2019/2020, and the estimate for passengers at this point in time is approximately 288,000. That is a fourteen (14) percent increase over the number of passengers that we brought into the destination last year 2018/2019.  So we continue to grow in terms of the cruise product. It’s important to understand that difference of about thirty something thousand people. When you look at it in terms of how many people disembark, how many go on tours, and what the average spend on island is, you are going to have an increase some thirty thousand people this cruise season over last year; and so that augurs well for the vendors, for the tour operators, for the tour guide, for the taxi drivers, and all the stakeholders that are involved in the cruise industry,” Piper added.

Emphasis is not only being placed on the tourist sites but also on the port of entries, and Government has spent millions rehabilitating the Roseau Ferry Terminal and the Cabrits Cruise Ship Berth. 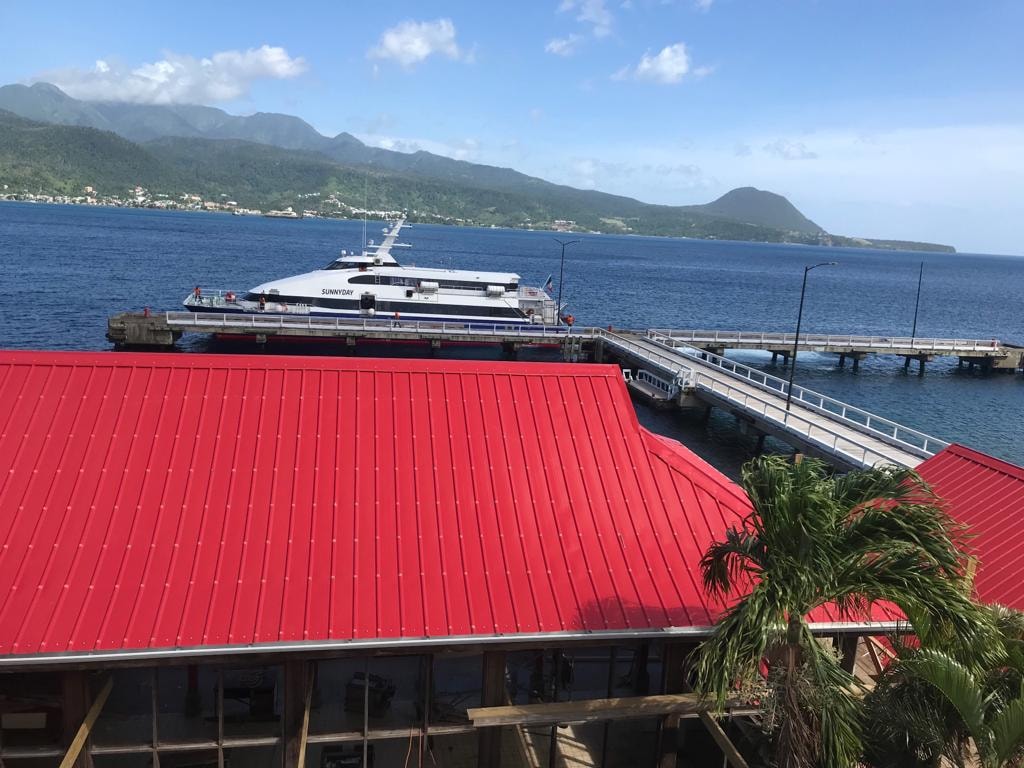 Over one point seven five million dollars was spent to upgrade the Roseau Ferry Terminal and make the space more comfortable for travelers using this form of entry into the island.

This building too was also damaged by hurricane Maria, so this was the ideal opportunity to build back better and stronger.

According to the CEO of the Dominica Air and Sea Port Authority, Benoit Bardouille, the terminal is now fully air conditioned and visitors now the get the opportunity to sit in comfort inside or at the top of the building.

“In a gradual way, we started rebuilding and refitting the facilities there. We have been able to do that, because one of the things in terms of the ferry terminal is that well over 40,000 persons come in utilizing the ferry terminal annually. So about 80,000 people utilize the facility annually, when you check the amount of people coming in and going out of that facility. And it is likened almost the volume that we will have in terms of the airport and the number of persons coming in. And we believe that if that is so, and in being a port of entry, there is another standard that is required to be able to facilitate passengers through there. So we have remodeled the facility so that we have put in air condition and services in there so that persons can have the comfort levels that they require. We have done things in terms of ensuring that logistics in terms of the way people go in and spend less time within that facility,” Bardouille stated.

He also revealed that work was also done in the customs and immigration department.

“Persons would normally have to wait two hours plus sometimes to wait for the ferry, and we realized that there needed to be some level of comfort for them, and so all of that went into it. We had the immigration and customs refitted to be able to provide better accommodation within the facility. And then, there’s limited space within the lower floor of the ferry terminal, so we decided to go up as well. Prior to Maria, there was a tent styled thing on the top of the building but we have decided to go with a more permanent structure up there. Again it is to facilitate the numbers, because we have ferries that carry as much as 400 persons, and you would have seen for the festival the number of persons that came in through the facility and we must say hats off to all the persons utilizing the ferry, especially our French neighbours, and we had very little difficulty in terms of handing the large volumes that came in,” Bardouille noted.

The new port of entry for Val Ferry is the Cabrits Cruise Ship Berth and Bardouille says Dominica prides itself in ensuring that travelers are comfortable upon entry into the country. The CEO also informed with the newly opened five star resort in that area the rehabilitation of the port was a priority.

Two point five million dollars was spent to rehabilitate the pier and the building at Cabrits.