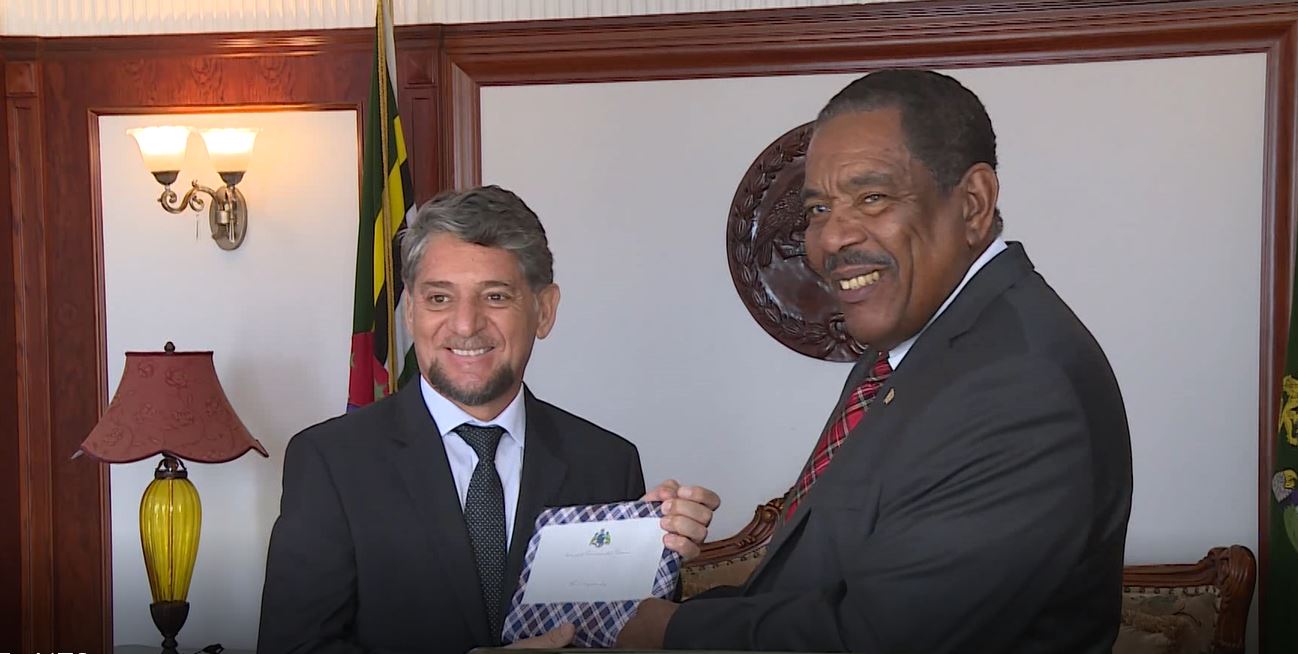 Dominica has welcomed a new ambassador to the Argentine Republic.

President Savarin noted Argentina’s commitment to further strengthen the bonds of friendship and cooperation which already exist between the two countries and the new ambassador’s intention to work tirelessly during his tenure to bring the two nations together through cultural and other exchanges.

He spoke of some of the ways in which Argentina has assisted Dominica over the years.

“This initiatives is supported and facilitated by the Visa Waiver Resolution passed in Argentina in May 2019, exempting all categories of Dominican passport holders from requiring visas to enter Argentina. Your Excellency, since our two countries established diplomatic relations in 1985, the relations between our two countries have been cordial and have developed significantly from 2011 through the establishment of technical cooperation under the Argentine Fund for Horizontal Cooperation. Under this Agreement, Dominica has benefited from technical assistance in the areas of health, tourism, education, gender affairs, disaster mitigation, agriculture and film production,” President Savarin stated.

The new Argentine Ambassador says he admires the courage of Dominican’s for their resilience following the category five Hurricane Maria.

“Let me congratulate you on the courage of your people who have admirable resilience after the natural disaster that recently hit the island. I have personally witnessed how the Government of Dominica managed to overcome such a painful event and I have seen your community working together to restore the country. I have also witnessed the unwavering faith of your people at the two year commemoration of the passing of Hurricane Maria at the Windsor Park Stadium. The hope and celebration event was indeed inspiring and encouraging for all of us and it demonstrated what really mattered in our role as public servants. It’s all about people,” Ambassador Pandiani stated.

The new ambassador noted that one of the initiatives which will be undertaken during his time in office is a cultural exchange between Dominica and Argentina, giving citizens the opportunity to learn the culture of each country.

“It is my dream and it will be my mission to work tirelessly to bring our peoples together. For that purpose, Your Excellency I intend to initiate an intense cultural exchange and a set of joint programs for Dominicans to learn more about Argentina and Argentinians and vice versa. Our commitment is permanent and comprehensive,” he noted.

Ambassador Pandiani made mention of one major achievement of the bilateral relationship which occurred this year.

“This year the bilateral relationship grew exponentially through various endeavours of mutual interests such as the agreement between the Argentine Republic and the Commonwealth of Dominica on visa waiver for holders of diplomatic and official passports, which I had the pleasure of signing recently along with Foreign Minister Honourable Francine Baron,” he further added.