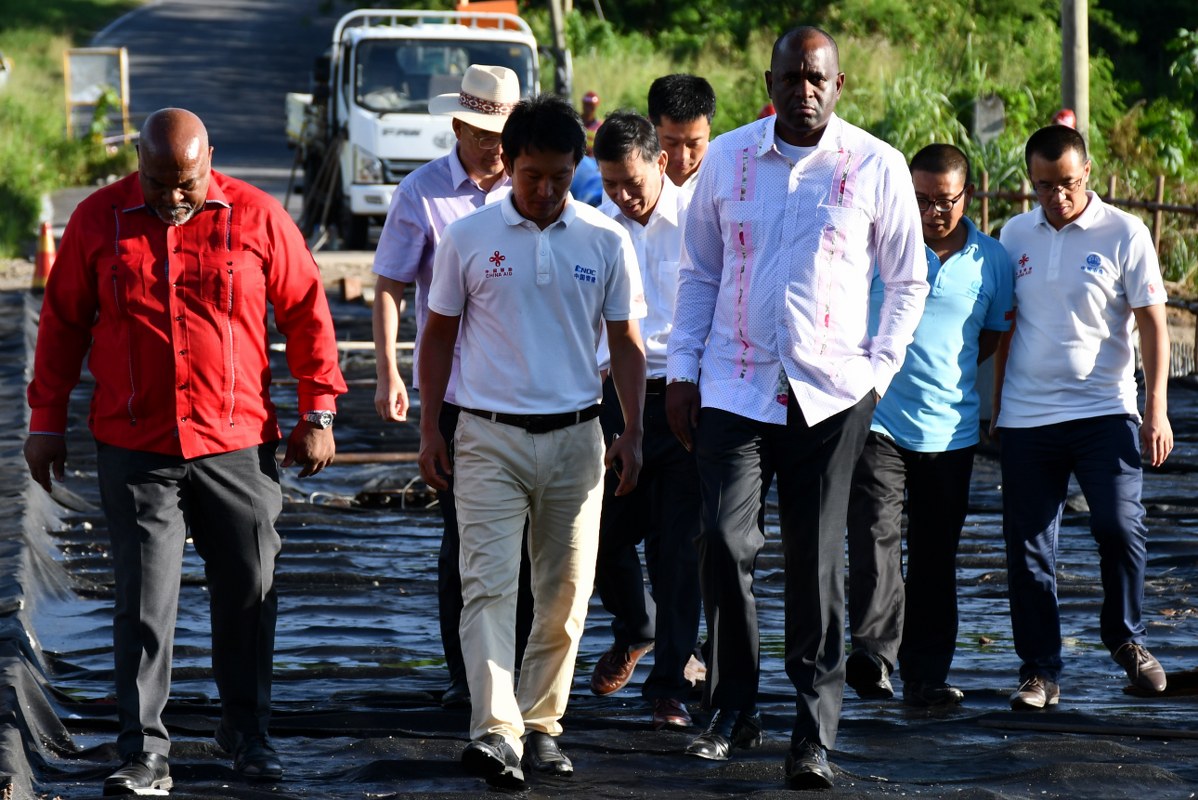 The Commonwealth of Dominica continues to benefit from the bilateral relationship with the People’s Republic of China.

These benefits were apparent after Prime Minister Honorable Roosevelt Skerrit led a cabinet delegation on a site visit of the West Coast Road Rehabilitation Project on September 9th 2019.

This project was established post-Erika in 2015, with a ceremony held on the 28th of March 2017 to mark the commencement of this project and the groundbreaking ceremony on August 18th 2017.

Prime Minister, Honorable Roosevelt Skerrit expressed his sincerest appreciation to the Ambassador of China and rehabilitation workers for their hard work and dedication. He also thanked them for “their quick return time to Dominica has displayed true friendship and willingness to assist a friend in need.”

“We look forward to continuing a very strong relationship between our two countries and my hope and prayers is that our own citizens can learn from you. The Chinese are the oldest civilization in all of the world, and there is a lot that a country that has just attained its independence in 1978 can learn from you. And we are open to learn from you, and I know that Ambassador through your efforts, you have created numerous opportunities for various short term training programs in China and we are seeking to take full advantage of all the opportunities that you have negotiated on our behalf. The number of our students that are currently studying in China, in engineering and various other fields are coming back to make a meaningful contribution to our country, and I think our quest for economic and social independence is attainable,” The Prime Minister stated.

“We want to thank you and your company for the exceptional work that you have done. Having regard to the fact that you were completely affected by the hurricane, and your quick return time to Dominica. But one of the things that I believe the Dominican population and of course the Government is very grateful for, and is something that we have taken very keen notice of, is the fact that this highway is a major thoroughfare in the country, with citizens using it every single minute,”  he noted.

“At no time was the general public inconvenienced by the works,” Prime Minister Skerrit continued, adding “that it is highly commendable that such expansive works could be taken on a major highway with absolutely no inconvenience, and I think that speaks to the extraordinary project management capabilities of our Chinese friends so we are very grateful for this.”

“The quality of work is exceptional, and you can see it, and I believe that the E.O LeBlanc Highway today, though the works are not completed, is more resilient now and it has taken into consideration coming out of Erika and further fine-tuned after Maria, a number of vulnerable points on the West Coast Road has certainly been addressed,” he further added.

The project is expected to be completed by June 2020.