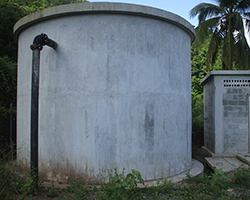 The Dominica Water and Sewerage Company Limited (DOWASCO) is progressing steadily towards rebuilding a resilient water system as the country continue to take steps to build the world’s first climate resilient nation.

The island’s water system was severely damaged in August 2015 by the passage of Tropical Storm Erika and was again heavily impacted by Hurricane Maria in September 2017.

General Manager of DOWASCO, Bernard Ettinoffe stated that while many of the systems were affected by both storms, the company has made significant progress  in the rehabilitation of water supply system across Dominica. in their progress.

“Following Tropical Storm Erika DOWASCO had made significant progress in terms of restoring water systems and building even greater resilience in some of the systems for example the Giraudel system. And we were well on course to where we were prior to TS Erika when Hurricane Maria struck and destroyed all of our water systems. Every single system was impacted; some we were able to restore a week after Maria while others took much longer,” Ettinoffe stated.

He noted that the Pichelin system was restored in December of 2018, an effort they were pleased with, noting that the “the people were extremely happy.”

“That is a major system for us as it serves all the way to Tete Morne as well, so we were delighted to have had that system restored with support from the Government of Dominica,” he stated.

Ettinoffe stated that while there has been progress, the company has faced numerous challenges in various communities including Salisbury.

“At the moment we have basically restored water in all of our water systems. We do face challenges in some of them, with the Salisbury-Grand Savanne system for example being the worse or the most challenging I would say at this point in time. That is because the source that we serve the Salisbury people is really virtually dried,” he noted.

He went on to state that DOWASCO is now looking at alternative ways to serve the community, noting that in the interim, through the assistance of various foundations they are able to truck water on a daily basis.

“Thankfully through the assistance of UNICEF and UNDP, we were able to get three large enough water trucks and of course through our own efforts we purchased a fourth one, that we use to serve the areas that we are challenged at this point in time. So, we truck water to the community on a daily basis, and it is costing the company quite a bit, but we have to bring some relief to the people of Salisbury,” Ettinoffe noted.

The General Manager also highlighted some of the issues that they faced in Soufriere. He stated that a new system had to be used to serve the communities and residents through pumps, as the current source in Soufriere is limited.

“Another major system that we embarked on is to serve the area of Soufriere Scotts Head Dominica again from the Pichelin intake. That is one of the areas that we have quite a bit of water, so it means that we have to get more water up to Tete Morne and to Montin where we are embarking on a two hundred and fifty thousand gallons storage tank which will be filled via pumps, which will then be used to feed, via gravity, Soufriere and Scotts Head,” he commented.

Ettinoffe also spoke on the company’s efforts to serve the newly opened Jungle Bay Resort and Spa, stating that they “are aware that the new Jungle Bay Resort was just recently opened, and that is how we intend to supply water to Jungle Bay through the new Montin to Soufriere system that is now ongoing.”

According to Ettinoffe, the new system currently being used to serve Jungle Bay and the Soufriere and Scotts Head communities is at a cost of 5.5 million dollars.

He further added that the company is looking at a new water source for the Soufriere area to aid in the development of that area.

“The available source in the Soufriere area is inadequate to meet the needs of the community and the hotel developments that are taking place. We had no choice but to seek alternative sources to provide water for the residents. And that alternative is really from the Pichelin intake through Tete Morne- Montin and down by gravity into Soufriere and Scotts Head, and that is well on its way,” he noted.

He further added that “the pipelines are nearing completion now; the tanks should be installed in another three to four weeks so at the moment we are trucking water to assist Jungle Bay because they have opened, and they need water to operate.”

Ettinoffe went on to add that while most of the other water intakes around the island has been restored since the passage of Hurricane Maria, work still has to be done by the company to ensure that the water system is resilient, falling into the plans of the Government to make Dominica the first climate resilient country in the world.

He also highlighted the efforts of the Government of Dominica and their assistance to DOWASCO in their recovery and restoration works.

“Of course, we are building resilience and have further plans to build greater resilience in the water systems. Because what we did following the hurricane was restore water as quickly as we could to most of the communities. So, the Government of Dominica of course ear marked some five million Great Britain pounds to assist DOWASCO in building the sort of resilience that we talk about and what the Government wants to see in the water system,” Ettinoffe added.