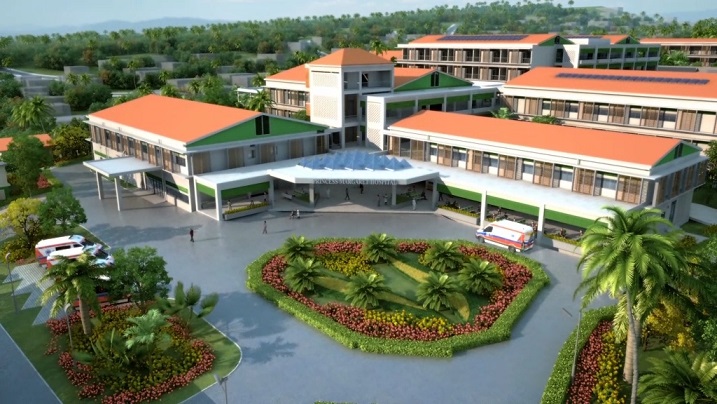 The first phase of the New National Hospital will be handed over to the Government of Dominica in April.

This is according to the Honorable Prime Minister of Dominica, Roosevelt Skerrit who was addressing a contract signing ceremony on Monday.

Prime Minister Skerrit stated that this new hospital will be an added attraction to the country while also providing a safety net for visitors.

“I also want to highlight the fact that we’re building the new national hospital which would enhance the tourism industry. Because tourist want to know ‘if I come to a country and I were to fall sick or ill, what are the facilities here?’ and the first phase I’ve been advised of the hospital will be handed over to the Government in April of 2019 and we look forward to the completion of this hospital. And that in itself would no doubt make Dominica even more attractive.”

The US$40 million New National Hospital is a grant from the Government of the People’s Republic of China.

It is part of the government of Dominica’s plan to advance the country’s healthcare system in infrastructure and otherwise and is being built by the Hunan Construction Engineering Group Corporation of the People’s Republic of China.

The Governments of Dominica and The People’s Republic of China formally established diplomatic relations in March 2004.

The Prime Minister also gave an update on the advancements on securing the land for the International Airport.

“We are making great efforts with regards to the construction of the international airport. We are now in negotiations, lands are being surveyed and we have written to a number of property owners in the site designated for the airport, and we are in negotiations with property owners and once we finalize those negotiations, then the property owners will be paid. We are also conducting more in-depth geo-technical surveys that would advise us on the soil type, and the type of engineering that we need to employ to mitigate against whatever challenges we may experience but I believe the debate about whether we need an international airport or not is over and we should consolidate all our efforts to achieve it.”