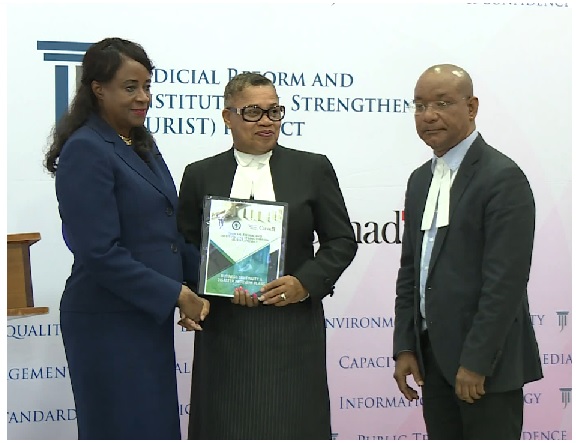 Court offices in Dominica have been the recipient of a $50K US donation from the Canadian Funded Judicial Reform and Institutional Strengthening (JURIST) Project.

The donation was made in support of the Eastern Caribbean Supreme Court's recovery efforts to rehabilitate the court, which was severely damaged by the passage of Hurricane Maria in September of 2017, leaving the system and the building out of order for the following months.

The official handing over ceremony was held on Tuesday February 12th at the Dominica high court.

Cameras, smart display screens and audio recorders among others, were some of the equipment donated to the court in an effort to update and modernize the court equipment, systems, processes and services.

All of the equipment handed over by the JURIST Project totaled to approximately $50K US.

The JURIST Project has been collaborating with judiciaries in the Caribbean to reinforce their own work, which aims at improving court administration while upgrading the capability of the court systems and the judiciary to solve cases efficiently and impartially.

This is another step toward fulfilling the mission of the jurist project; which is to create a regional judicial system that is sympathetic towards the needs and requirements of citizens from all backgrounds.

The project is a five year regional Caribbean judicial reform program funded by the Government of Canada under a Nineteen Million Canadian dollar agreement.

The project is being carried out by the Caribbean Court of Justice on behalf of the Conference of Heads of Judiciary of CARICOM. The CCJ and other regional allies have also contributed approximately four million Canadian dollars to the initiative.