CHINESE GOVERNMENT DONATES FUNDS TOWARD THE RESTORATION OF FORT SHIRLEY 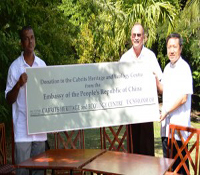 Officials from the Embassy of the People’s Republic of China have come forward to assist with the restoration of Fort Shirley at the Cabrits National Park.

Dr. Lennox Honychurch who has been delegated by Government to supervise and negotiate for the development of Fort Shirley says this gesture by the Chinese Government was a follow up from a recent highly successful visit of H.E Vice-Chairman Chen Changzhi to Dominica.

“Apparently after his visit here H.E the vice chairman was so impressed with what he saw, he wanted China to contribute something to this site and so the embassy here got into action and a number of its officers including the Ambassador got the ball rolling to where we are today.”

Earlier this week the Chinese Ambassador to Dominica, H.E Wang Zonglai presented a fifty thousand dollar contribution towards the restoration of Fort Shirley.

He says, “Today my colleagues and I came here to show our respects to the vision and spirit of Dr. Honychurch and make our contribution to the career he and his colleagues have been devoted to.”

Dr. Honychurch has been working as the contractor on the project for several years. He expressed his extremely gratitude and delight about the contribution from the Chinese Government towards the restoration efforts.

“The project at Fort Shirley is to create a local and international center for the study of Ecology and Heritage.  The prospective name is the Cabrits Heritage and Ecology Center.  It is fully supported by the Government of Dominica.  We are at present reconstructing the old troops barracks to turn it into a hostel to accommodate youths and community groups who would be doing courses in Ecology and Heritage.  A small museum has been proposed as an educational and tourism facility for the project.  The Chinese Embassy has agreed to fund the project to the total amount of EC $50,000 dollars to achieve this goal.  This has been achieved with the cooperation of the officers and the Ambassador of the embassy here.”

Dr. Honychurch says once the rooms are repaired, displays will be installed to provide a small museum at the fort which will be to the benefit of the island’s young people.

“It will be an educational contribution to Dominica.  We often think of tourism but the contribution that will be made by China here can be seen as a component of the education system of Dominica.  Every day we have a number of school groups [that visit] and now they will be able to go through here and learn a lot about their country.  We will be producing panels with all of the information.  There are already some display cases and we will be getting the Dragon Window Company to work with us in providing the glass cases for the display here.”

The Cabrits National Park is one of Dominica’s most important historic sites. It looks over one of the nation’s harbors and guards the first proposed capital town of the island, Portsmouth.

Over the years various Governments have assisted Dominica in this important restorative project. The project has been ongoing for the past thirty years.

We have 256 guests and no members online