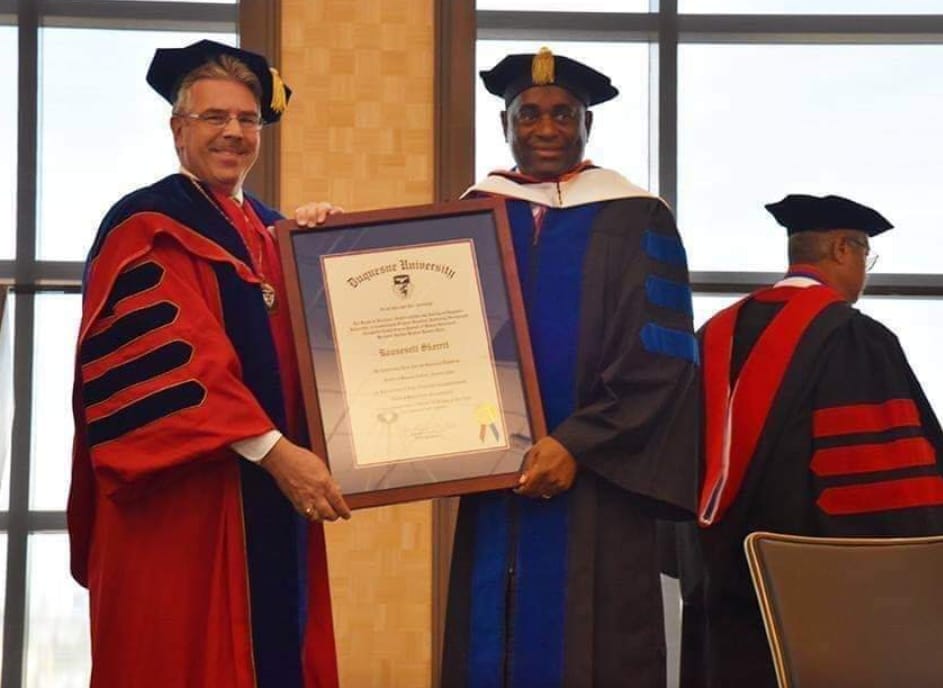 Prime Minister of Dominica Hon. Dr. Roosevelt Skerrit has been awarded an honorary Doctorate from the Duquesne University in Pittsburgh, Pennsylvania, in recognition of his leadership and advocacy on climate change.

The conferment of the Degree of Humane Letters, Honoris Causa, took place on October 16, 2018 during a ceremony at the Charles J. Dougherty Ballroom on the university campus by President of the University, Dr. Ken Gormley.This is the second honorary degree conferred upon the Dominican Prime Minister in a matter of two years.

Following the conferment ceremony,Prime Minister Dr (H.C) Roosevelt Skerrit delivered the Integrity of Creation Leadership Address, “Building Climate Resilient Countries” – a presentation co-sponsored by the Center for African Studies and the Presidential Conference on the Integrity of Creation, on how to rebuild and reconstruct in a manner that makes a country resilient to catastrophes and natural disasters.

“The issue of climate change cannot be an ideological debate, it is a matter that we all need to work together to address. We may all have different perspectives, but we must not lose sight that climate change is impacting the very way of life of every one of us in this world.”

The Dominican Prime Minister added, “Climate change is affecting our way of life and if we do not do something about it now, we will see countries disappearing, submerging. And the unfortunate thing for all of us in the islands is we have nowhere to run to.”

In February 2016, Lovely Professional University of India conferred the Doctor of Letters degree on Hon. Prime Minister Skerrit “in recognition of his desire to build international harmony among nations and for his outstanding public services and excellent governance.”

We have 241 guests and no members online