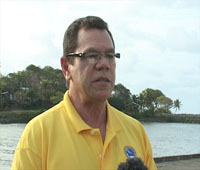 President of the Caribbean Development Bank (CDB) Dr Warren Smith is encouraged by the positive impact that projects funded under the CDB’s Special Development Fund (SDF) and Basic Needs Trust Fund (BNTF) are having on the less fortunate citizens of Dominica.

Last week, a team of CDB officials were on island to tour a number of projects across the country supported by the bank’s special funding programmes.

He also highlighted the importance of visiting these development projects in Dominica and gave a description of the funding process involved.

“Every four years, contributors get together to review the performance of the use of those funds over the previous four years. What they do is go through the different thematic areas that were agreed at the beginning of the cycle to make a determination as to whether value for money has been received.

“We are [currently] in the final year of SDF [cycle] Seven, so the preparations for SDF Eight begin approximately one year in advance of the commencement of SDF Eight. What we have started here in Dominica is a discussion around performance in relation to SDF Seven. How the contributors assess what we have performed is going to determine the amount of resources that they are going to give us for SDF Eight.”

Dr Warren says Dominica is a principal beneficiary of SDF funds, and he believes that executors of the fund have implemented some very important projects that have had a positive effect on the lives of the poor and disadvantaged in this country. He also says the contributors have had a very favourable impression of what has been accomplished with the funds allocated for specific projects here.

Site visits included the Pointe Mitchel sea defense wall which is currently under construction, the Mahaut Senior Citizens Home, the Social Centres in Roseau and Portsmouth, community development projects in the Carib Territory and the Marigot water supply project.

We have 558 guests and no members online