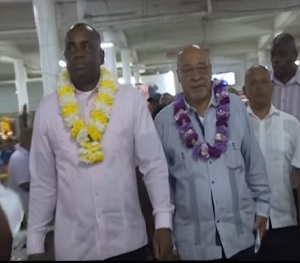 Prime Minister Skerrit will discuss matters relating to agriculture, tourism, and trade and climate resilience with the Surinamese leader. The Dominica delegation, which includes Minister for the Environment, Climate Resilience, Disaster Management and Urban Renewal Joseph Isaac, Permanent Secretary in the Ministry of Agriculture Dr. Reginald Thomas and Director of Forestry Mr. Minchinton Burton will visit agricultural holdings and observe farming practices in rice and banana cultivation as well as the production of coconut oil.

The two leaders are expected to enter into a Memorandum of Understanding aimed at strengthening and deepening bilateral relations between their two countries.

While in Suriname Prime Minister Skerrit will also address the Conference on Theology in the Caribbean Today (CTCT). The Prime Minister was invited as a feature speaker against the background of his stated goal to make Dominica the first Climate Resilient Nation in the world.

“This would serve as an opportunity to share your vision for Dominica and the region and might galvanize further support and action towards improved attitudes to climate change in our region,” the CTCT told Prime Minister Skerrit in an invitation letter.