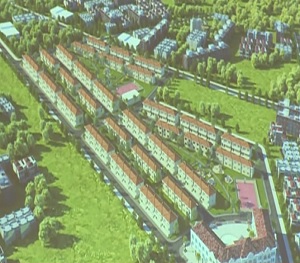 The Government of Dominica has broken ground for a second and third housing project in one week.

Last Thursday, the town of Portsmouth saw the launching of the northern housing project otherwise known as the Phoenix Development in Georgetown, Glanvillia where the first 68 of 226 homes will be constructed.

The Hon Minister for Housing and Lands, Prime Minister Roosevelt Skerrit said the quality of housing pursued by Government for citizens represents his administration’s definition of making Dominica the first climate resilient country in the world.

“It is [built] to ensure that if a disaster were to come, we would be in a better position to withstand it and if we were impacted, we would get out of the situation much quicker than otherwise,” he said.

The modern development will also have all electrical, telephone and cable lines ran underground, he highlighted.

But the housing minister reminded the Portsmouth community that this development and others which will be constructed around the country, come at a price as “every cent spent on the project will come from the CBI of Dominica.” The Prime Minister asked citizens to stand in defence of the Citizenship by Investment Programme irrespective of political affiliation.

Meantime, the Hon Member of Parliament for the Portsmouth constituency, Ian Douglas expects that this project will transform the island’s second town.

Another significant aspect of the development is a new administrative block with a fire station, police station and sporting amenities.

Critical government services, currently only accessible in the city of Roseau, will also be available. This includes services from the immigration and traffic departments, the inland revenue division, the sub-treasury and registry departments as well as the education and sports divisions.

The Prime Minister, Member of Parliament and the Mayor will also have offices at that building, an impending change welcomed by the people of the town.

The project is being developed by Montreal Management Consultants Establishment (MMCE), the same developers of the Bellevue Chopin housing project for the people of Petite Savanne.

Project Manager, Christopher Timmings presented to the people of Portsmouth the plans for their project. He says the buildings will be built fully with reinforced concrete and will be able to withstand hurricanes and seismic forces. They will also feature impact resistant windows and solar water heating.

The Georgetown development will happen in two phases. Sixty-eight in phase one and 158 in phase two. Phase one is expected to be completed by August 2019.

A project for Cotton Hill, Lagoon was also launched on Thursday where another sixty-eight apartments will be built.

Hon Austrie says not only will these new developments transform Portsmouth, but the communities of the north will also be positively impacted.