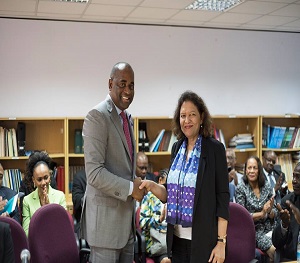 The Hon Prime Minister and Minister for Finance and Housing, Dr Roosevelt Skerrit was profound in gratitude for the assistance of the World Bank to Dominica since the passing of hurricane Maria last September.

“We are extremely pleased with the demonstration of not only a commitment based on the bank’s mandate but the emotional connection which yourself and your staff have placed on this mission in Dominica…for this, this country and myself will always be eternally grateful,” Hon Skerrit told World Bank representatives.

He says the World Bank’s assistance to Dominica is not because of the destruction brought on by hurricane Maria, but the island’s pronouncement of its desire to be the first climate resilient nation in the world and called on all Dominicans, particularly leaders, to join the effort towards this end.

“The plan of our country to build the world’s first climate resilient nation has taken cognizance of the international community. People are buying into this vision, so it is left for us in Dominica to be united in purpose. We will all have different views of what should be done, when it should be done, how it should be done and who should do it, but we must not lose sight of the bigger picture. In this state of our rebuilding there should be no place whatsoever for parochial, partisan consideration,” the nation’s leader noted.

He says while “every leader in this country must be forthright with his views”, he must also be “honest and transparent with his recommendations and criticisms because this will make us stronger.”

“The world is with us; it is left for us to be with ourselves in Dominica,” he said.

The Dominica leader says while wanting to be the world’s first climate resilient nation is a tall order as the island is faced with numerous limitations, his Government is fully convinced that the goal is achievable.

Meantime, new Minister for Agriculture, Deputy Prime Minister, Hon Reginald Austrie expressed gratitude that more aid is coming to the farmers and fishers of Dominica as since taking up his new post last month, he has expressed his intention to reposition the agriculture ministry to more efficiently meet the needs of farmers.

Earlier this year, over 4000 benefited from an US$18.2 million grant partly funded by the World Bank. Under this new agreement, dubbed ‘The Emergency Agricultural Livelihood and Climate Resilience Project’, close to 5000 farmers and fishers will benefit as Government seeks to restore livelihoods in those sectors and to introduce and adopt climate resilient strategies.

“The main components and subcomponents of the budget allocation for this project are as follows, and it gives an indication of the intended interventions to get the sector back on its feet. These components would include the restoration of crops, some $8.8 million will be spent on that … restoration of livelihoods and fishing systems, some US$3.3 million; [and] the climate resilience and commercialisation, US$1.4 million. Component B would include the restoration of the key ministry of agriculture assets to some US$7 million [and] capacity building, US$2.3 million. Component C would be the management structure which would include the project management unit where we intend to spend some US$10.2 million,” Hon Austrie detailed.

Up to 1700 families will receive subsidies for rebuilding houses to the required specifications prescribed by the housing division post hurricane Maria.

The Hon Minister in the Ministry for Housing, Johnson Drigo, said this assistance from the World Bank is a tangible demonstration of the process to secure funds to rebuild stronger.

“It is a solid indication that we are well on our way to recovering and rebuilding our beloved country…,” he said.

This assistance from the World Bank, which is part loan, part grant, is part of a US$115 million package that will also see the advancement of Dominica’s geothermal project and infrastructural development.

World Bank Regional Director for the Caribbean and Latin America, Tahseen Sayed Khan says coupled with the bank’s desire to help Dominica achieve its goals through technical and financial assistance, she was moved by Prime Minister Skerrit’s optimism and aspiration to make Dominica the world’s first climate resilient nation. She says the island must look at building resistance in all aspects.

The nation’s leader pledged his government’s commitment to using the funds wisely and in accordance with the rules of the bank.