Ministry of Agriculture Working to Expand Production of White Potato 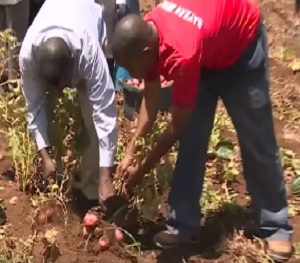 Farmers are receiving great yields from white potatoes this season and they are grateful. Shortly after the passage of hurricane Maria, Government to ensure food security and to quickly revive the agriculture sector, provided several farmers with free seeds and fertilisers for short term crops such as white potatoes.

Two containers of white potatoes were made available in collaboration with the government of Canada through PROPEL. The Hon Minister for Agriculture, Johnson Drigo and other officials of that ministry visited Calibishie last week to get a first-hand view of the abundant harvest.

“I want really to thank the government and people of Canada through PROPEL for its assistance in supplying to the ministry double the amount of seeds that we received for last year’s season and I also want to thank the farmers for their hard work. We are seeing a very, very big bumper crop of white potatoes this year and we are looking forward to next year when we will double the number of acres. This year we established over seventy acres, our hope is to do over 100 acres next year in white potatoes. It looks like a new crop that we will be producing not only for food security but also as part of the export strategy of this country,” Hon Drigo said.

He applauded particularly the women farmers who are very committed to the trade.   The agriculture minister says several women are now leading several farmers groups around the country.

One such woman is Octavia Hunter who has been a farmer for forty years and currently serves as President of the North Eastern Women Farmers Group. She received eight bags of seeds at one hundred pounds per bag and fertilizer.

“We got the potatoes from the PROPEL company and we planted; we followed all of the instructions, we kept our records, we sprayed on time, we did what we had to do, and the weather also permitted us very well to be successful,” she said. “All in all, it was a very good harvest. Last week Monday I sold nineteen bags for DEXIA at 52 pounds per bag and yesterday we harvested eighteen trays at about 80 pounds in a tray and today we have the rest to harvest…I might get another ten trays today…”

She is excited about this crop which she says is relatively easy to grow. A good report for the ministry of agriculture which eyeing the white potatoes as a potential cash crop. “Single women can do it by themselves. I can come and plant my potato, I can get the tiller and do everything…plant my potato, weed my grass, fertilise my potato and I can move on without having men to come and do work for me so it’s a very crop, it’s a very crop and it coming in fast…I think its successful,” Hunter gloated.

Hon Drigo says his ministry’s aim is that in a few years from now there will no longer be a need to import white potatoes. To make sale of the produce even easier for farmers, Government has made special arrangements with the Dominica Export Import Agency (DEXIA) to purchase all the white potatoes and in turn sell to local retailers.

Hon Drigo informed, “There are retailers who have been in discussion with the ministry very early on who are prepared to purchase these potatoes through DEXIA…we do want the farmers to have the responsibility of looking for sale for these potatoes especially since we are looking at food security.” 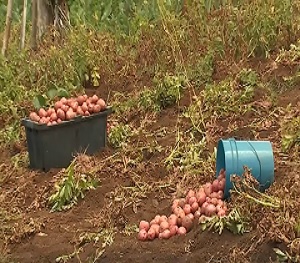 “White potatoes are imported in large quantities annually and it has been shown we have the growing conditions for us to be able to produce potatoes. I think the government of Dominica which now looking at diversifying its productive base could look at expanding the production throughout the island and as the conditions provide, to grow it year-round if possible as a means of doing some import substitution,” he said.

He says other areas are being tested out to decide the most suitable locations for planting potatoes on island. While last year, only one container of seeds was imported, this year double the amount was given out free to farmers for planting. Dr Thomas says it is the ideal crop to build into Dominica’s resilience strategy in agriculture.

“White potatoes is not going to go away; it is a crop that is going to be part of our root crop programme; it is also a crop that lends itself to resilience (all the root crops) and this particular crop, we will try to build it into our resilience strategy as we look to actually have food in the event that there is something, a storm or some other event, that we have food for our population. These are some of the strategies that we will use at it relates to building resilience in agriculture, building resilience in our food system.”

Dr Thomas says there are several lessons to be learnt as the Ministry of Agriculture seeks to encourage more farmers to plant. He spoke of what success in this expansion would look like.

“Importantly, we want to reduce the sale price per pound of potatoes to ensure that it is competitive with the imported potatoes and that the farmers have no issue once they produce to sell that product. So, this is a strategy to build the sector, and to build the sub-sector as it relates to white potatoes. So, lessons learnt we will see how we can implement these measures to expand our production.”